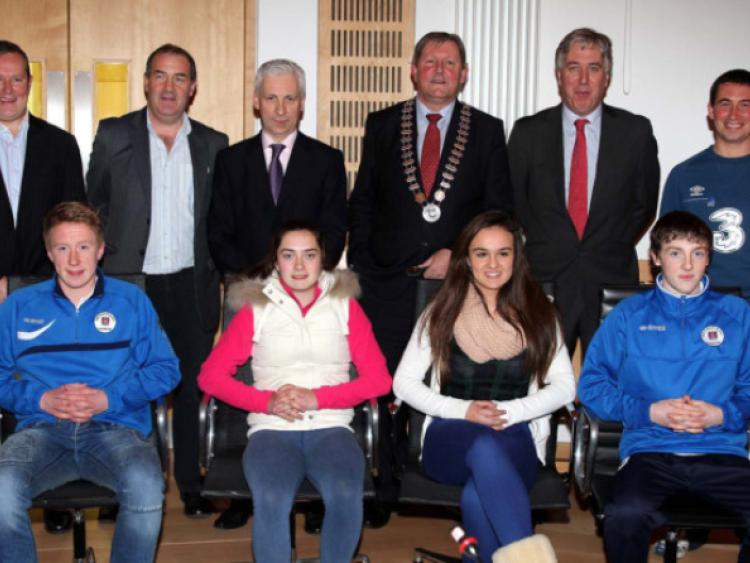 The future of soccer in Tipperary has never looked brighter with a host of rising stars coming to the top through the FAI’s Emerging Talent programme.

The future of soccer in Tipperary has never looked brighter with a host of rising stars coming to the top through the FAI’s Emerging Talent programme.

Run though the North Tipperary Schoolchildren’s Football League by local development officer James Scott, the programme is aiding 425 players to develop their talents to the highest level and has already seen Tipperary players feature on a range of underage teams at international level.

“The aim of the programme is to play more like Barcelona than Bolton,” according to James, who addressed county councillors on the scheme ahead of a civic reception for St Michael’s FC and Nenagh AFC to honour their national FAI cup triumphs this year.

“Everyone is in this together. We look at playing a 1-4-3-3 game with the emphasis on using both feet in a technical passing game through attack and defence,” he said.

The programme is not just concerned with on-field activities and has an off-field code that includes preparation such as food and drink, manners and respect, timekeeping, group mixing and, most importantly a fun feature.

James pointed out that the programme is aimed at producing the next generation of players in Tipperary, with many who have gone through the programme coming back to coach young players.

The programme is divided into different categories and is for boys and girls, with the basic being the FUTSAL academy with 80 players, followed by the U11 future stars section which has 120 players; sections for the U12s, U13s ad U14s, as well as the U12 girls’ future stars academy, which is run in four Tipp centres, and the girls’ emerging talent programme for U14s and U16s.

Dylan Kennedy, Cillian Fitzpatrick and Oisin Fitzpatrick from Nenagh are back from a six-a-side tournament in Montenegro.

On the girls side, Sarah McKevitt from Peake Villa in Thurles has made the U15, U16 and U17 international teams and Chloe Connolly from Nenagh AFC is in the U16 squad.

Other talent coming forward includes James McGrath from Nenagh AFC, who was an U15 and U16 international, captaining the U15’s and now plays for Pike Rovers in Limerick and was part of the Limerick FC side that took on Manchester City in 2013; Steve Nolan from BT Harps, who also played at U15 and U16 level and played for Ireland in Qatar in 2012, and plays with Limerick FC U19s; David Kelly from Ballina plays with Nenagh AFC has been capped at U16 Level, and Tommy Holland from Ardcroney plays with Limerick FC U19’s has been capped at U15 Level and Jack Brady from Lough Derg in Ballina has been capped for Ireland Schools he is currently playing with Shelbourne FC U19’s.

Steve Nolan has been on trial with Liverpool while Tommy has had trials with Aston Villa.

Helping the development is the programme’s partnership with Reading, and James said it was fantastic to walk into the Reading players area and the first picture you see is that of Gortnahoe’s Shane Long.

“We play Reading FC’s Academy at Easter every year,” he said.

Commenting on the work James is doing, Cllr Michael Fitzgerald, Cathlaoirleach of Tipperary County Council, said Mr Scott was to be congratulated for the opportunity he was giving young players.

“At the end of the day, no matter what level you play at, the dream is always there to play for Ireland and it is great to see two boys and two girls at that level,” said Cllr Fitzgerald, adding a word of encouragement that “others will come through”.