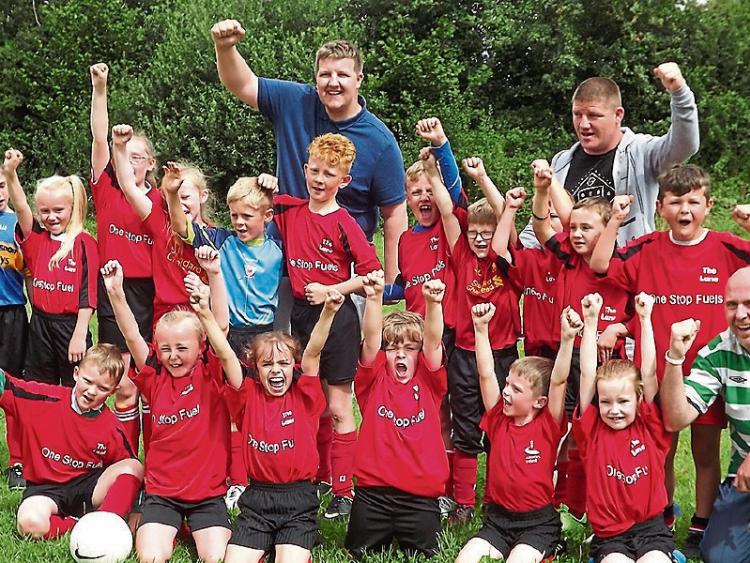 In April of this year Michael Donovan asked for a public meeting to try and start a soccer league in the town and to see who would be interested.

Six people turned up to the meeting in Scoil Eoin and plans were put in train, first advertising in the town and National Schools to see if the children would be interested. The 'Six Estates' were asked to sign up, and sponsorship was sought from McDonalds Roscrea, who were only too delighted to come on board.

A public meeting was called again and on April 25th it was decided to kick off the first match with Gleann Glas taking on Kennedy Park in Gleann Glas. The excitement was amazing and support was brilliant. The league has Six Estates of both Girls and Boys and they are Ashbury, Sheehane, Kennedy Park, Ard na Greine/Tullaskeagh,Chapel Lane, and Gleann Glas with a junior team and a senior team and the children starting from ages 3 up to 13.

There were three games played a week and it was played on a league basis. Some of these children have never played sports and we have watched their skill and confidence grow in the last few months with them getting active, getting out and making new friends. There were 230 children playing each week with every child getting to play each night. We have some real Ronaldos Messi's De Gea's and Gerards, giving everything for their Estates and loving it even though they don't get the big bucks for doing it.

This was getting great support from the residents of each Estate and from the town of Roscrea and has been so successful that plans are being made for next year already. We'd love to see the support continue. It's bringing the Estates and the town of Roscrea together. Managers and Trainers for each Estate are as follow: Ashbury - Tommy Murphy Tommy Fitzgerald Mary McNamara; Ard na Greine/ Tullaskeagh - Wally Kirwan Ian Carr; The Lane - Keith Dohney Colm O'Hanlon James Foley Yozzer Carney; Kennedy Park - Con O'Lone Rebecca Simmons Pauline Simmons; Gleann Glas - James Burn John Paul Wynne Judd Choppin JJ Quinlan; Sheehane - Michael Donovan Jackie Dillon Conor Doherty . These people give up their time to train the kids and to organise the matches and deserve credit for the work they have put in to make this something positive and so successful.

We'd like to thank everyone who has helped get the kids ready and worked hard to maintain them and keep them in shape for each match. The Referees were: Eoghan O'Shea, Billy Conlon, Derek Halpin, Alan Lynch, Yozzer Carney, David Wynne.

Thanks to all the business people who sponsored us: we would never have been as successful, and James Kirwan for make the Crests for each estate and the main league crest - a brilliant job done.

On July 21st and 22nd, we organised a huge finals day. Co. Councillors from all over came and played the Managers and Coaches and it was a draw. We held an over 50s match, with a bit messing and laughing and a few injuries, but all in all it went off well.

Next year, plans are being made to make this event even bigger and better and we would like to thank the children, all our supporters and everyone who helped make this a huge success.