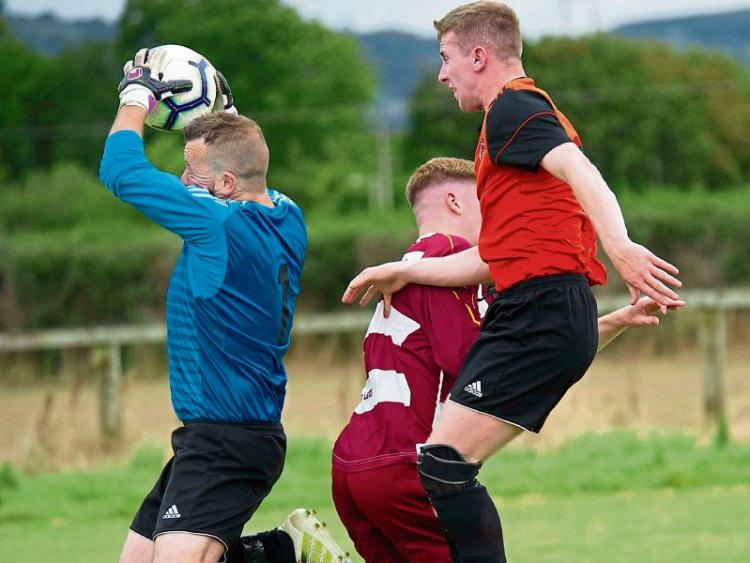 Cahir Park’s seconds continued their good start to the Second Division season with a third win on the trot against a lively but ultimately limited Donohill side who are struggling to get off the mark this year.

The visitors started well and caught the home side cold when they scored within the first five minutes of the game with a well taken effort by John Lowes.

Donohill didn’t panic however and were back level only two minutes later when Keith Bourke broke the Cahir offside trap and finished a brilliant effort to the corner of the net.

In the 20th minute things got even better for the home side when they cut the Park’s defence open again to take the lead courtesy of a goal by Shane Brennan. However when they looked like they were going to take that advantage to the break with them, Cahir came up with a late goal by Ger Quinn to finish the half at 1-1.

The second half was a very tight affair with neither side wanting to back down, but as the half wore on the superior fitness of the visitors began to show. They went back ahead in the 17th minute when Quinn scored his second, and extended that lead to two ten minutes later when David Brannigan found the net.

Although Donohill tried hard to get something from the game, a late Cahir goal that gave Ger Quinn his hat trick secured all three points on the day.

Both these teams will have legitimate aspirations of promotion from the Second Division this season, and they both got their campaigns off to a winning start, but it was Galbally United that rolled back the years on Sunday last and took the points from a good Rosegreen team who have been in fine form of late.

The game was even enough in the early stages and both teams had a number of half chances, but neither was able to fashion anything that troubled the opposition net minders.

Level at the break the first real chance of the game fell to the home side when Davy Carroll thought he had opened the scoring only to see his shot cannon back off the crossbar and away to safety in the 65th minute.

And things got worse for the home side minutes later when evergreen Quinn Perry opened the scoring with a low shot from the edge of the area that gave the home keeper no chance.

Rosegreen chased the game after this and forced some really good defending from Galbally, but with ten minutes left they bowed to the inevitable and were caught on the break when a counter attack that spanned the length of the pitch ended with John Dineen who fired home Galbally’s second and decisive goal.

Kilsheelan United picked up their first win of the season with a good two goal win against Cullen Lattin on Sunday, and were aided in their cause by an early goal when Mark Heffernan chased down a clearance and headed past the stranded Cullen Lattin goalkeeper.

This set the tone for the game with Kilsheelan United making good use of the high press and pinning the visitors back time and again around their own penalty area. They were unlucky not to add to the lead nine minutes before the break when Ronan Quigley set up Ross Larkin but his shot flew wide of the post.

The visitors did manage to settle a little after the break and came back at the home side fashioning a number of chances, but it what Kilsheelan United’s defence’s time to shine now and they gobbled up whatever was thrown at them easily enough.

When they did breach the home back line, Cullen Lattin  found Eddie Sweeney in fantastic form between the posts and he managed to thwart anything thrown at him.

The killer blow in the game finally came in the eighty third minute when the home side saw Mark Heffernan take on the whole Cullen defence and he scored a wonderful individual goal to ensure his side took all the points.