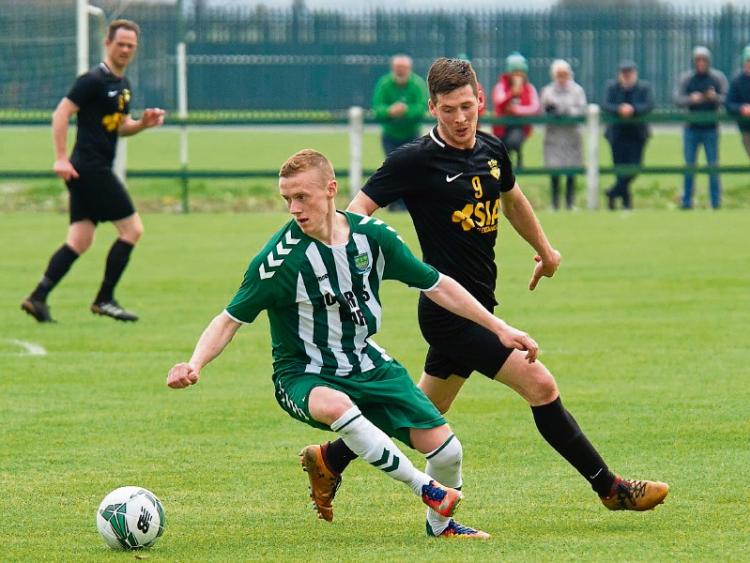 Jimmy Carr who scored from the penalty spot for St Michael's in their 3-0 away win against Peake Villa of Thurles in the Munster Junior Cup 3rd Round game on Sunday last.

St Michael’s finished off another triumphant year  with a win when they overcame Peake Villa in Thurles on Sunday to move smoothly once again into the open round of this season’s Munster Junior Cup.

The defending champions  were always the better team in a largely scrappy game that never reached any great heights, perhaps as a result of the Christmas lull.

The early exchanges were even enough until the ninth minute when a Russell Quirke free kick broke kindly for Sean Guerins to easily head home and make it 1-0 to the visitors.

The windy conditions made it difficult to generate any fluidity in the game and it took until halfway through the first half before the home side tested the Saints keeper, who pushed a header from Mikey Wade over the bar easily enough.

The current cup holders finally got a second goal eight minutes from the break when David Slattery played in Willie Armshaw who got a deft touch to knock the ball past the advancing William Tierney and make it 2-0.

The last real chance of the half then fell to Peake Villa, when Mikey Wade set up Eoin O'Brien, but his shot flew high over the bar and away to safety.

St Michael’s then had the wind at their backs in the second half, making their dominance even greater and allowing them to pin the Thurles side back for long periods of the half.

Jimmy Carr and Johnny Kennedy both had good efforts blocked before the hour mark, while Pippy Carroll managed to pull a save out of Aido Walsh in one of the rare forays up the pitch for his side.

As the game wore on it became dour and niggly and both sides used their benches to the limit.