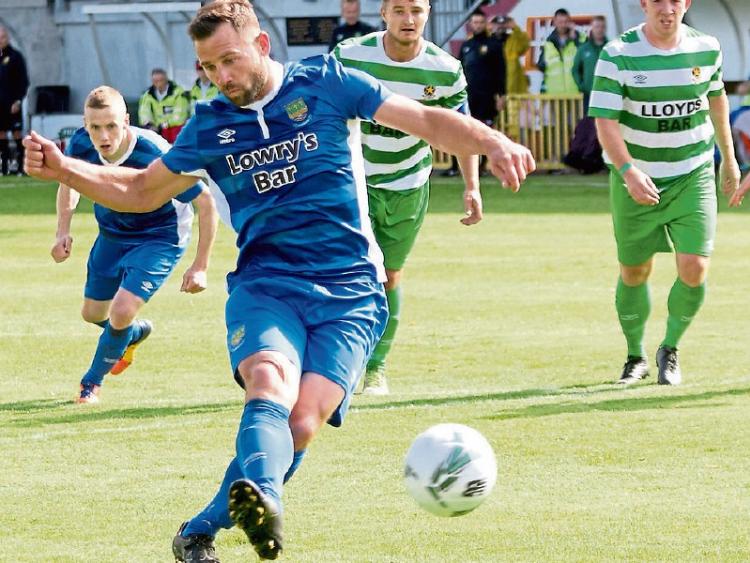 Joey Mulcahy scored St Michael's opening goal in their 4-3 win over Wilderness Rovers in Division 1 of the TSDL on Sunday last.

This was another vitally important game in the First Division title race, and in it Saints looked home and hosed until a late rally from the visitors gave them a few late anxious moments, before they took all three points.

The hosts had much the better of the first half and took the lead on 13 minutes when the ball broke kindly for Joey Mulcahy whose right foot finish nestled in the corner of the net.

Mulcahy nearly made it two in the 18th minute when his free kick came back off the post, and was scrambled away, and Alan O’Dwyer went close from a cross just before the half hour mark.

But the pressure eventually told and they got the second in the 33rd minute when a long kick from Eoghan Tinkler and good work from Alan O’Dwyer saw Mulcahy beat the keeper from 20 yards out.

They made it three minutes later when Danny O’Brien finished well at the far post following a good move, and it could have been four just before half-time when Mikey Nash played in O’Brien who saw his effort saved by Ross Dennehy.

The second half started in a similar fashion when Liam McGrath had a half chance to increase Saints lead after only a minute, and it looked all over on the hour when following good pressure from Alan O’Dwyer, saw a defender place a poor back pass and Danny O’Brien pounced to make it4-0.

But to their credit  Wilderness Rovers never dropped the heads and on 63 minutes slack defending from Saints saw Seanie O’Hara nip in to lob Eoghan Tinkler to get a goal back.

The hosts then began to sit deeper and deeper and with 15 minutes left a 25-yard strike from Sean Browne made it 4-2.

Their tails well and truly up now, the visitors took complete control of the game and with minutes left O’Hara reduced the deficit to the minimum when his effort sneaked inside the near post to set up a grandstand finish.

The Saints had a few anxious moments in the seven minutes of additional time but  held out to win three very well-earned points.