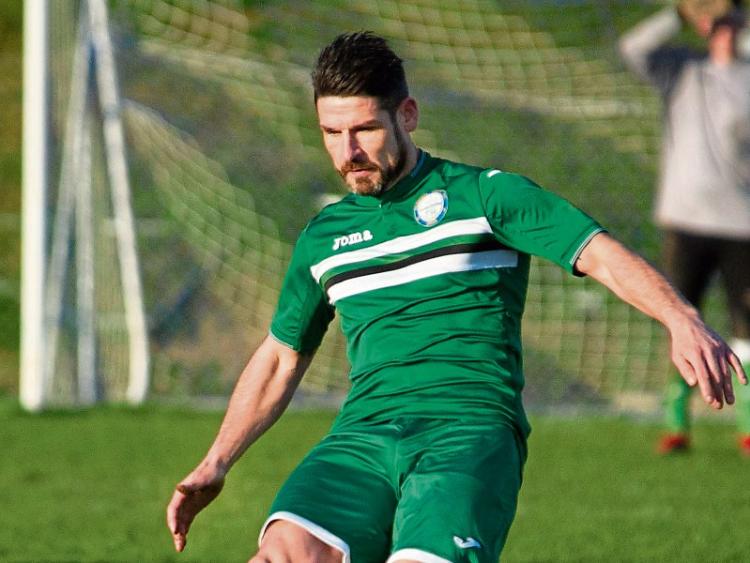 John O'Gorman (Clonmel Celtic B) taking a shot at goal in their Tipperary Cup win against Cashel Town B on Sunday last.

Both sides served up a fantastic cup tie last week and this week it was back to league action.

After a slow start Clonmel Town took the lead thanks to a fine effort from Cathal Deely from outside the box, a lead which they held until half time. Just on the hour mark the sides were level when Cullen were awarded a penalty which was dispatched to the net by Mikey Stokes.

Disaster struck six minutes later for the hosts when they conceded a second to Tony O’Neill which eventually turned out to be the winner giving the league leaders more vital points.

Bansha Town kept up their fantastic run against teams from the Division Two League above when they stayed at the top of the table courtesy of a win against Shanbally United.

The visitors started off firing on all cylinders and opened the scoring in the 15th minute when a strike from outside the area flew into the top corner off the foot of Liam O’Neill. The home side responded well however and went to half-time level after Anthony Harding hammered home a 30-yard strike ten minutes before the break.

The second period saw both teams push on and the game was end to end with both  creating plenty of chances. However they had to wait until eight minutes from time before a flick-on from Killian Fitzgerald landed on the boot of the young Daniel Dwyer who took off like a bullet and produced a sublime finish into the far corner, giving his side the winner and sending the watching supporters wild with delight.