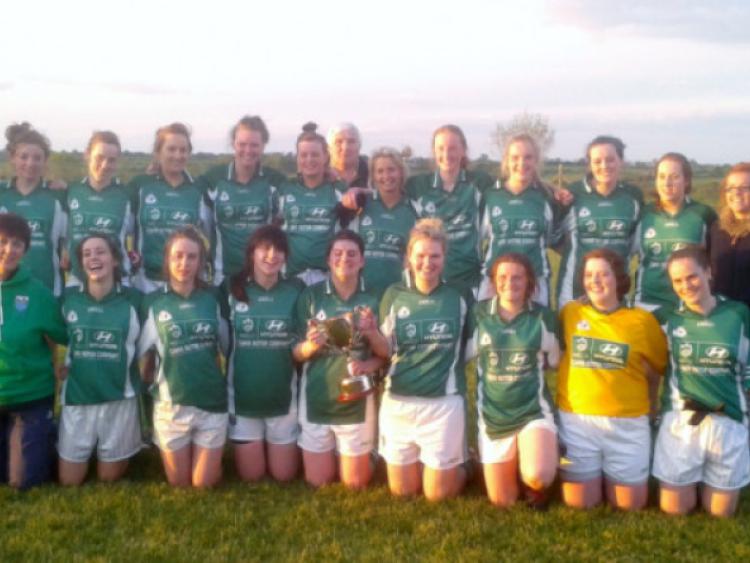 In a well prepared Father Sheehys GAA field Cahir and Moyle Rovers fought a titanic battle in the County Ladies Senior Football league Final, before a large crowd who were very vocal in their support for each team.

In the first half Cahir’s defence were under pressure from a very good Moyle Rovers forward line. Orla McEniry in goal pulled off a super save to deny Moyle Rovers midway through the first half and with Sinead O’Donnell, Annie Marie Ryan and Lorna McEniry defending excellently it gave Cahir a great foundation to build on.

The midfield pairing of Megan Bourke and Aisling O’Connor combined well in helping out both defence and attack. At half time the scoreline was Cahir 0-4 Moyle Rover 0-5. Cahir’s points coming from Leanne Barrett, Freda Casey, Roisin Howard and Emma Buckley.

The second half started at a fast pace and Cahir got a good start with two points from Leanne Barrett to lead six points to five points. Then Moyle Rovers took over and scored three points to lead by two points coming into the last ten minutes of the game. A point by Aisling McCarthy put the bear minimum between these two excellent sides. A switch of

Aisling Moloney to mid field paid rich dividends as she cover all areas of the field. The introduction of Aoife

Corcoran and Caitriona Nagle paid great help to the outcome of the game.

With just under six minutes remaining on the clock a great move by Cahir was excellently finished by America bound Aisling O’Connor. This was to be the turning point of the game as a goal in such a tight contest was always going to determine how this game ended.

When referee Michael Duffy blew the whistle for full time there was great scenes of jubilations as it was Cahir’s first ever trophy at senior level. The cup was presented by Tipperary Ladies Gaelic Football Chairman Tommy Campbell to joint captains Aoife and Orla Casey.