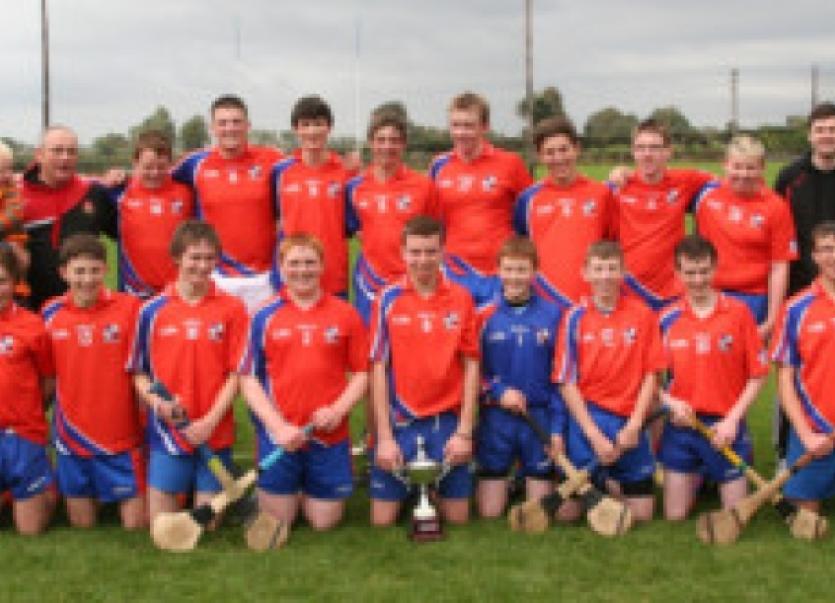 Skeheenarinky are county under 16 ‘c’ champions

Skeheenarinky are county under 16 ‘c’ champions

New Inn was the venue last Saturday for the first of the U 16 hurling deciders with the C final between Skeheenarinky and Golden Kilfeacle. As there was no competition in this grade in the north division it was agreed by County Bórd at a grading meeting that all participants in this grade play in a county league format. So when semi finals took place the pairings resulted with two south teams battling it out with Skeheenarinky overpowering Clonmel Og. In the other duel Golden Kilfeacle proved far too strong for Eire Og Annacarty

The South representatives were entering the final as hot favourites as they had a 100% record with comprehensive victories.

However on final day the boys from Golden were not deterred and had a point on the score board from Tommy Breedy within the opening minute. A response came with a pointed free from Skeheenarinky captain John Ryan. On the fifth minute mark Philip English added a point for Skeheenarinky. Golden had proceedings level with a pointed free from Eoin Ryan.

Three minutes later John Ryan pointed another free to put the score at 0-3 to 0-2 in favour of the south men. The game’s first goal came on the eleventh minute from Skeheenarinky’s Josh Macken to put his side ahead 1-3 to 0-2 ahead.Philip English added another goal for the south men to put them in a commanding lead 2-3 to 0-2.

Cian O’Connell reduced the deficit for Golden with a pointed free and seconds later saw his next attempt tail narrowly off target.

During the remaining ten minutes of the opening half Skeheenarinky added four more points to their tally. Josh Macken accounted for three from play with John Ryan pointing a free in the closing seconds of the period. Golden added two points courtesy of Brian Barlow and Timmy Holland to put the interval score at Skeheenarinky 2-7 Golden Kilfeacle 0-5

Josh Macken was firing on all cylinders for Skeheenarinky covering many areas in attack clocking up a personal tally of 1-3. John Ryan was playing his captain’s part. His colleague Evan Hayde was strong in defence for Golden Kilfeacle, Niall Heffernan was also being central to a lot of the action.

Things were looking bleak for the west contenders as the south men slotted over another point inside the opening seconds of the second period to go 2-8 to 0-5.

However the west came to life and during the next eight minutes went on a scoring spree while totally dominating their opponents. Cian O’Connell scored a point, followed by a goal.

The West side had a scoring hero in Niall Heffernan who converted two frees and with two from play to bring his tally to 0-4 within a ten minute period to reduce the Golden deficit to a single point 2-8 to 1-10.

On the 18th minute Cian O’Connell slotted over a west point to level the sides for third time 2-8 to 1-11 and the western pressure was getting to the south men as they missed the next two scoring opportunities that came their way.

After a good passage of play from which Josh Macken set up Adam Macken for another Skeheenarinky point and another response from the west to tie the sides for a fifth time 2-10 to 1-13. Two more points were added by both sides to put the sides on level terms on full time 2-12 to 1-15

Extra time of ten minutes aside took place to settle this contest with Golden taking the lead for the first time in the game and finished the first period of extra time one point ahead. Two Skeheenarinky players and one from Golden were dismissed after some unsavoury action took place.

On the resumption Golden added another and was in the driving seat. Mickey Maher added a point for Skeheenarinky which was quickly followed with goal to put them 3-13 to 1-17. Golden added another point to reduce the difference to a single point but unfortunately for them the time was up.

However Golden Kilfeacle have to be complimented despite being the outsiders contributed to a brilliant game in which hurling was a real winner.

Bórd Pro Neil Ryan prior to presenting the cup to Skeheenarinky vice Captain Tiernan O’Brien thanked Rockwell club for providing a splendid pitch and to referee T.P.Sullivan and his officials for officiating.