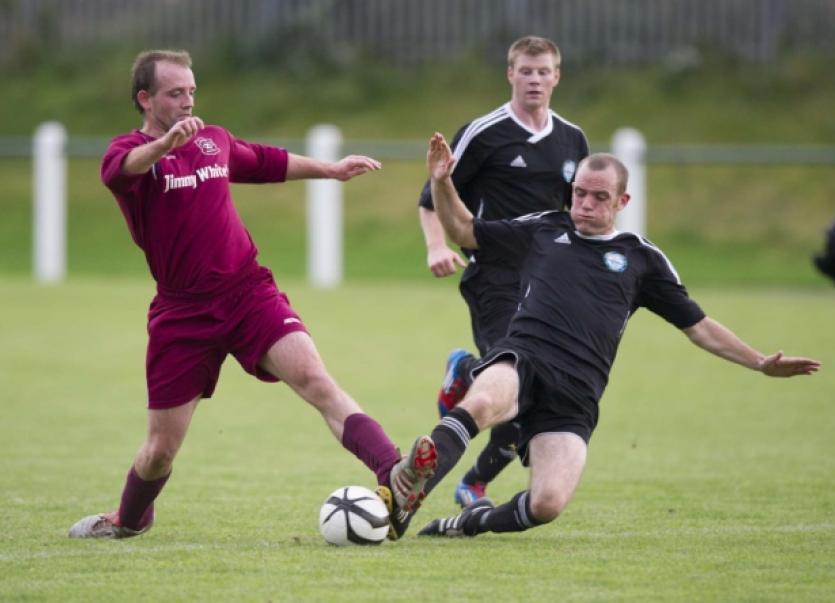 The first TSDL silverware of the season was presented last Sunday at a bright and sunny Dualla, with victory going to one of the league’s newest clubs who were tasting success just two months after being formed.

Dualla were quickest out of the blocks and fashioned two half chances in the first ten minutes. Suirside finally began to get the ball down and play a little and in a cameo that proved portentous later on, they fashioned the best chance of the first half when a slip by Dualla centre half Derek Hayes, left Darren Sweeney clear on goal, only for him to lash his shot against the crossbar. Suirside did have the ball in the net five minutes later, but a flag from the linesman ruled it out.

The second half started in much the same fashion as the first ended, and within minutes of the restart, Gary Crowe was called upon to make a magnificent save from Darren Sweeney. In the 66th minute Dualla’s Michael McDermott eluded the tackles of three Suirside defenders to find himself one on one with Tommy Sweeney in the Suirside goal. Alas the chance was smothered. It did seem though to wake Dualla up, and a free kick by Richie Hennessy from the left wing simply invited a finishing touch but was glanced wide rather than on target and then a number of free kicks at the edge of the area were squandered, as the clock began to run down.

It looked for all intents and purposes that both teams were mentally gearing up for an extra 30 minutes when disaster struck Dualla almost on the stroke of full-time. Similar to what had happened in the first half, central defender Derek Hayes, who had a fantastic game otherwise, slipped with the ball at his feet inside his own penalty area. Once again it was Suirside striker Darren Sweeney who was in attendance to pick up on the mistake, but this time, the error was punished and Sweeney was as cool as the breeze had become to slot the ball home from less than six yards giving goalkeeping hero Crowe no chance this time. That also gave Dualla no chance to reply as within minutes the referee blew the final whistle to end the game to huge celebrations from the travelling crowd and begin an evening of celebrations. All in all, Suirside were probably the better team but only just. It was a tough way for Dualla to lose, but one of Tipperary’s newest teams took home their first silverware in the end.