Minors march on into All-Ireland final 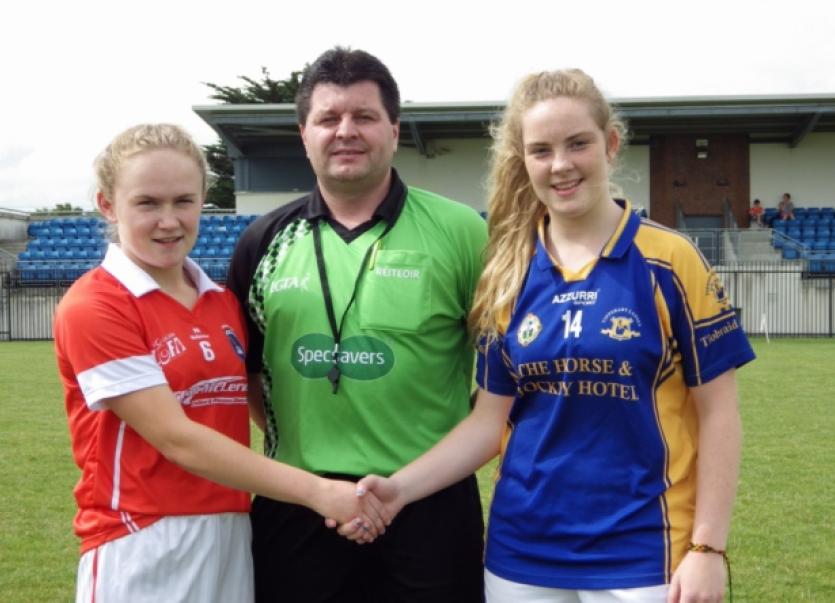 Following a victory over Waterford in the Munster B Minor Final, Tipperary earned themselves a place in the All Ireland Minor B Final with the Ulster Champions Armagh as their opponents.

Following a victory over Waterford in the Munster B Minor Final, Tipperary earned themselves a place in the All Ireland Minor B Final with the Ulster Champions Armagh as their opponents.

Neither county are strangers to All Irelands with Tipperary competing in 2009 and winners in 2010 while Armagh were champions in 2011. St.Peregrine’s GAA, Dublin was the venue for the Semi Final on Saturday last in hot humid conditions.

Tipperary opened the scoring straight away when Aisling Moloney caught the ball from the throw in and soloed through the field to score the first point. Their second point in the second minute came from Sarah Everard. Aimee Mackin, Armagh in the fourth minute scored two quick points to equalise the game. The game had started a quick pace but that did not continue as it was the twelfth minute before the next point was scored by Aisling McCarthy. Armagh’s Aiobheann Henderson got their next point in the fourteenth minute to level the sides again. For the next sixteen minutes Armagh continued to add four points to their scoreline while Tipperary struggled to score. Armagh’s goalie Anna Carr made it very difficult for the Tipperary forwards to raise the green flag while Tipperary’s Lauren Fitzpatrick guarded her goals brilliantly with some excellent saves as well. In the thirty first minute Aisling McCarthy scored a point to reduce the deficit at half time to three points, Armagh 0-7 Tipperary 0-4

Aisling Moloney opened the scoring in the second half with a point from the throw in and another in the fortieth minute. Aisling McCarthy equalised with a point from free in the forty first minute. Tipperary and Armagh would trade points in the forty second minute. In the forty fourth minute Caoimhe Condon pointed for Tipperary to put them in the lead. A minute later Roisin Howard raised Tipperary’s green flag. Aisling Moloney added another point to Tipperary’s score line to give them a lead of five points just before Roisin Howard received a yellow card and ten minutes in the sin-bin. Aimee Mackin, Armagh added two points to their scoreline but despite this Tipperary pushed on with goals from Caoimhe Condon and Aoife Corcoran. Aimee Mackin netted the ball for Armagh to reduce the deficit to six points but Elaine Kelly, Tipperary added a further two quick points to Tipperary’s scoreline before Aoife Corcoran and Aisling McCarthy raised the green flag for Tipperary. The final score of the game was a point from Aisling McCarthy. Tipperary 5-13 Armagh 1-10.

In Ardagh, Longford the other Minor B Semi Final took place between Offaly and Leitrim. Offaly were victorious on a score line Offaly 4-14 Leitrim 1-12. Tipperary and Offaly will now contest the All-Ireland Final Minor B Final which will be held on Saturday August 2nd at a venue to be confirmed.

At the launch of the TG4 All Ireland Championship Tipperary were drawn to play Wicklow in Round 1 of the TG4 All Ireland Intermediate Championship Qualifier in St. Brendan’s Park, Birr on Saturday July 26th at 2.00pm. Tipperary will have good memories about the last time they played in St. Brendan’s Park when they overcame Longford by a point after extra time in the All Ireland Quarter Final on August 17th 2013. All support is welcome.

Tipperary Ladies Football is due to start its Under 12 Academy on the 26th of July in Duneske, Cahir. The first day will involve registration, a talk, skills challenge and a 9 a side blitz between all players and it expected to run longer than other sessions with a finish time of 1.00pm.

The Academy is open to all girls born in 2002 and will run for 12 weeks. There will be one home Inter County blitz day and at least one away Inter County blitz day.  Any player interested please email or text Ed Burke, Development Officer the following info to development@tipperaryladiesfootball.ie or 086 0585932; Name, Date of Birth, Club, Preferred Position.

Well done to all Tipperary Clubs who competed in the Munster Ladies Football Under 12 blitz in the two separate venues Mungret, Co. Limerick and Moyle Rovers, Co. Tipperary on Saturday last. A great day was had by all the young girls.

On Thursday last, the sun drenched Tipperary Golf Course in Tipperary Town was the venue for the Johnny Murtagh Golf Classic. This fundraiser in aid of the Tipperary Intermediate Ladies Footballers was well very well supported with teams arriving all day to take part. The prize winners were presented their prizes by Michael “Babs” Keating, Olive Health & Safety.