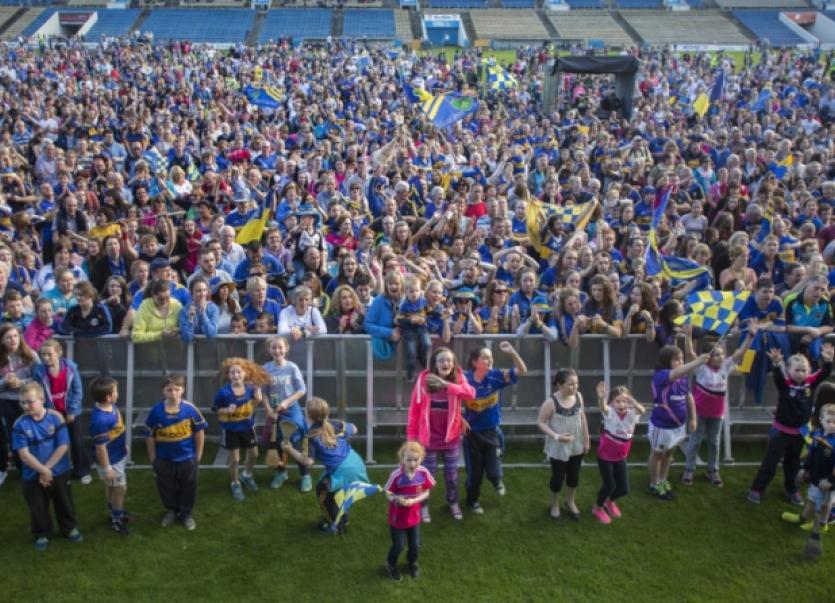 The formalities of Tipperary’s hurling year came to a close on Sunday afternoon last at Semple Stadium, Thurles, with the ‘Homecoming.’

The formalities of Tipperary’s hurling year came to a close on Sunday afternoon last at Semple Stadium, Thurles, with the ‘Homecoming.’

Unfortunately though, it wasn’t to be the victory celebration that all Tipperary people desired. Nonetheless, for the estimated 3,000 loyal supporters who attended, and most importantly for the players, it was an expression of everything that is good in Tipperary hurling and in amateur sport.

A homecoming without a winning trophy is akin to Hamlet without the Prince. Even with the main character missing an event can still be staged but they never seem quite right. And it was like that once more on Sunday last, Liam McCarthy declined our invitation once again, and everyone did their very best to soften the blow of his absence.

From before 3 o’clock a crowd began to trickle in to Semple Stadium for the anticipated arrival of the Tipperary hurlers. By the time the team eventually made it on to the specially constructed platform in front of Ardán Uí Riain, it was 5.30 pm.

In the meantime, through sunshine and some showers, the crowd were entertained by a host of acts including the Tipperary Gospel Choir,  Louise Morrissey, Johnny B and the Boogie Men and Tipp FM.

In a rallying call the PRO went on to forecast that “this time next year the McCarthy Cup will be back in Tipperary and back in Thurles.”

He went on to thank the effort of the whole county over the past number of weeks, “every parish, every town, every village in the county, you have ‘Blue and Gold’ banners flying.”

Councillor Michael Fitzgerald, chairman of the new Tipperary County Council, on behalf of the members and the people of Tipperary, wanted to “heartily congratulate and say a very very well done to our hurling team, not only for yesterday but for the pleasure and enjoyment they have given us not just this year but throughout many years.”

He went on to add, to rapturous applause, “our heads are down today, our hearts are heavy, but I can guarantee you one thing, we will have better days in Semple Stadium, we will have better nights here, welcoming home our team again after winning the All-Ireland in 2015”

“It is so encouraging to see so many people who have come out here tonight” to show their appreciation to the team and the management who have worked so well over the year,” he added.

“We as a county are indeed proud of what this team has achieved, and as I said there will be better days ahead,” the Golden man concluded.

Sean Nugent, chairman of the County GAA Board, said he was “absolutely thrilled with the turnout” at Semple Stadium for the team and management, “who had given such performances on 7th September and on yesterday evening at Croke Park. On 7th September they had given one of the greatest performances any Tipperary team ever gave in an All-Ireland final.”

After paying glowing tributes to the players and to Eamonn O’Shea, Michael Ryan and Paudie O’Neill for their outstanding efforts over the year, the Kilsheelan/Kilcash clubman concluded by saying:

“In 2014 we have had some great days but we’ve had some difficult days as well, and today is probably one of the most difficult days. But today is the day that we make the fightback, and we’ll keep the faith and we’ll say to ourselves as the chairman of the county council said, we will be back here in Semple Stadium after the All-Ireland final in 2015 with the Liam McCarthy Cup.”

An obviously very disappointed team manager Eamonn O’Shea was next to speak. He started by thanking all who had turned up on a show of support before going on to acknowledge the great effort of his team over the year. Speaking of his team he said, “they lost nothing in the way they represented the ‘Blue and Gold’ and the proud tradition of that jersey.”

“Finally, we can’t promise you anything of what’s to come, but I do know that these players behind me here, these players are made of stern stuff and will come back with the Liam McCarthy Cup in the not too-distant future. Until that happens, keep the faith, and we’ll be back again” concluded the Kilruane MacDonagh clubman.

Last to speak was team captain Brendan Maher, described in Andy Fogarty’s introduction as “an inspiring leader, a tremendous captain.”

The Borris-Ileigh clubman, was obviously gutted not to have followed (just yet) in the footsteps of previous All-Ireland winning captains from the same club - Sean Kenny (1950), Jimmy Finn (1951) and Bobby Ryan (1989) - in raising the McCarthy Cup.

He started by thanking everyone for their support “it has lifted our spirits immensely, it has been a tough 24 hours after yesterday. We went up to Croke Park yesterday to win the game, we didn’t win, but I can assure you all the hurt we are feeling at the moment and with all the support you are giving us that we’ll be driven in 2015 to bring the McCarthy Cup back to Thurles.”

The captain went on to thank sponsors Skoda and particularly Ryan Motor Power in Clonmel, the Tipperary Supporters Club, Michael Lowry, the backroom team, and finally the management team of Paudie O’Neill, Mick Ryan and especially Eamonn O’Shea for sticking with them in difficult times.

The players were then individually introduced to the crowd.

And so the curtain came down on an amazing year for Tipperary hurling. Heroic but luckless, it seems. A Tipperary Crystal Cup was won earlier in the year under lights at the Gaelic Grounds in Limerick butafter that it seems that ‘Lady Luck’ deserted us. A puck of a ball denied Tipperary glory in both the National League final and the All-Ireland final; both games ultimately lost after full-time draws to Kilkenny. It will be a long hardwinter now of what-ifs and buts, but as speaker after speaker said at Semple Stadium at the homecoming - “KEEP THE FAITH THERE WILL BE  BETTER DAYS AHEAD.”