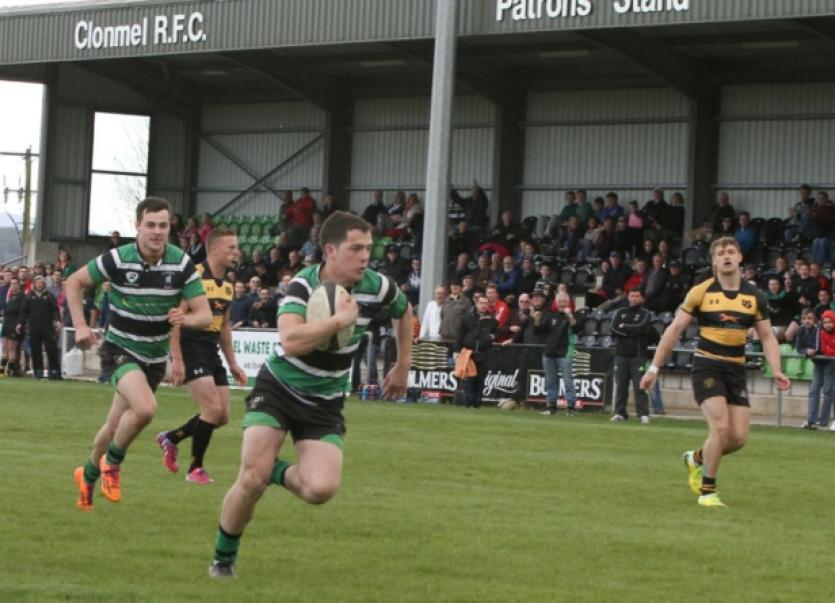 After the bittersweet end to the All-Ireland League provincial play-offs in Belfast the previous weekend, it was back to home last Sunday for the semi-final of the Munster Junior Cup against Limerick rugby stalwarts Young Munster.

After the bittersweet end to the All-Ireland League provincial play-offs in Belfast the previous weekend, it was back to home last Sunday for the semi-final of the Munster Junior Cup against Limerick rugby stalwarts Young Munster.

The extended league campaign with the three AIL play-off games on three successive weekends meant the Cup campaign was temporarily on hold for Clonmel with Shannon RFC already booking their place in the final after overcoming fellow Tipperary contenders Kilfeacle.

In glorious sunshine and in front of great home and visiting support it was Clonmel that took the game to Young Munster in the opening quarter and after a bit of a settling in period, Daragh Foley opened the Clonmel scoring, touching down for the first try on nine minutes. The resultant conversion attempt by Conor Cooney was just wide of the mark and Clonmel took the lead 5-0.

As the game progressed it was end to end stuff with Young Munster using various platforms to attack Clonmel but on each occasion the Clonmel defensive line stood firm.

A winning Clonmel lineout inside the Young Munster 22 set up another driving maul and on thirty minutes, captain Ronan Crosse scored the second try for the home-side. On this occasion Cooney was inch perfect and secured the extra two points with a well taken conversion. Clonmel led 12-0 on thirty minutes and that remained until half time.

On forty eight minutes it was the visitors who opened the second half scoring with a penalty to narrow the margin to 12-3. However within ten minutes Daragh Foley, for the second time, crossed the line for a well worked Clonmel try to make it 17-3.

Another period of sustained pressure saw Clonmel camped inside the Young Munster half until a defensive kick by the Limerick side was charged down by Clonmel centre Brian Condon, who gathered well and raced for the line to register the fourth try for the home side. Clonmel now led 22-3 on sixty minutes.

Seemingly very much in control of the outcome at that juncture, Clonmel continued to push forward. However Young Munster with a spirited never give up attitude scored the next two tries and with one successful conversion rendered the game a much tighter affair on 22-15 on seventy five minutes. A penalty for Cooney extended the Clonmel lead to ten points on seventy nine minutes, only for Young Munster to eke out another try in injury time which they duly converted. It was now a very nervy 25-22 deep in injury time and when the referee blew the final whistle the Clonmel collective sighs of relief were clearly audible.

A positive result, if a little too tense in the end, sees Clonmel into their second Munster Junior Cup final in successive years. They now travel to the hallowed grounds of Thomond Park next Sunday (KO at 5pm) to take on Shannon in the defence of their coveted Munster Junior Cup title.