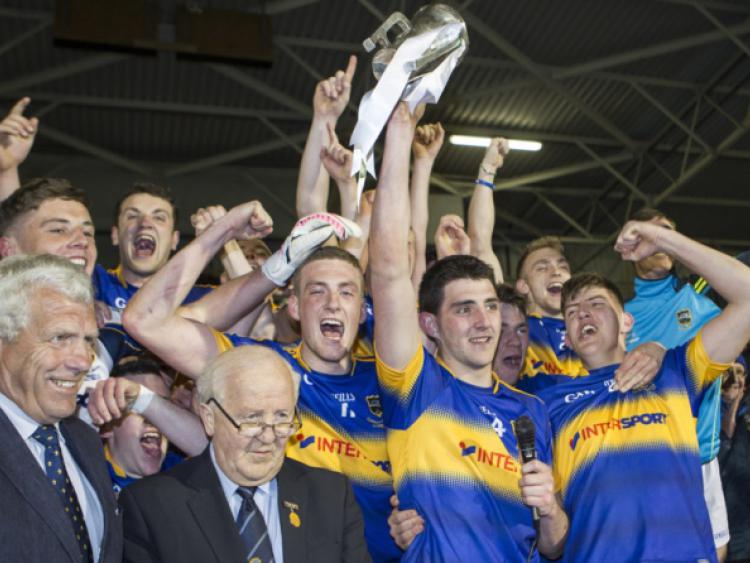 Tipperary under 21 football captain Colin O’Riordan, is an inspirational leader on and off the field, displaying a maturity way beyond his 19 years.

Tipperary under 21 football captain Colin O’Riordan, is an inspirational leader on and off the field, displaying a maturity way beyond his 19 years.

At the recent All-Ireland Under 21 Football Final press evening at the Anner Hotel, Thurles, organised by the Tipperary County Board , the JK Brackens clubman spoke of not alone the upcoming game with Tyrone but other matters relating to football.

When it was put to him about the gesture of Tipperary and Dublin players coming together in the middle of the field in Tullamore as a mark of respect to Dublin and UCD stalwart Dave Billings, who died suddenly recently, Colin said.

“I gave Davy Byrne the Dublin captain a shout (days before the game) as I thought it would be a nice thing to do as a mark of respect to Dave (Billings) and he text me back within a few minutes saying he was on for it. Dave was probably the greatest man up there in UCD that I ever met, he would do anything for you and he was an inspiration to everyone and I suppose it was just a small thing out of respect.

“I only knew him a year and to be honest with you he was one of the main reasons I went to UCD. He was a massive influence. He would be on the phone to you wondering was everything alright, were you ok. He would look out for you, he was sort of a father figure to every young lad that went up there. Unfortunately I only knew him for a year but he was still a massive influence on my life anyway,” he added.

Moving on to the upcoming final and asked if playing in an All-Ireland final, you’ll say you’ll just probably take it as another game, but similar to 2011 it is a big deal for the county. While it wasn’t expected that Tipperay would get this far now that you are there anything is possible?

“I suppose at the start of the year if you tipped a Tipp v Tyrone under 21 final people would have laughed at you, people would have said you were mad. But we are there now and we always had the belief that this group was something special and finals are there to be won, they are not there just to competed in.

“We plan on going out and giving it our all and hopefully on the day that will be enough but Tyrone will be a stiff opposition and it won’t be easy. But no finals are easy to win, it won’t be a 10 point win for either team. It will be a tight close game and hopefully we will have the right result in the end,” answered the dual star.

Put to Colin that it was noticed that after the Munster final win over Cork and the Dublin game you got it together straight away and it appears Tipp are a very focused side...

“Celebrations after the Munster were good but they were parked then. After the Dublin game there wasn’t any celebrations, we were back in the pool the next morning and that was it. Game won and there was another game to be won. If we beat Tyrone we can celebrate then,” he laughed.

On winning an All-Ireland minor football medal at just 15 - was it surreal?

“Do you savour it, do you enjoy it. You do enjoy it, you enjoy playing football but the real enjoyment is when you win the cup and there is no cup won at the moment.”

Steven O’Brien referred to the disappointment of losing to Mayo in the All- Ireland minor football championship quarter-finals in 2012 and the heartbreak of it. Was it a similar setback for you?

“Going up on the bus to the Dublin game Steven (O’Brien) was talking to me about the special group of lads we have and I told him I had a nightmare there last night and he started laughing at me. I told him I was after dreaming about the Mayo match and he said just make sure it doesn’t happen today. I honestly still do get nightmares about it and it’s not just a cliche you wake up and you think if only, if only, if only.... but we have a chance to rectify that now and hopefully we can do it,” added Colin .

Asked of the potential in Tipperary football at this time? And on losing a player of the calibre of John  McGrath, the team doesn’t seem to miss a beat..., the likes of Kevin O’Halloran coming in... there seems to be something special about this squad...

“There’s massive potential in Tipp and I think we are the first group that went through this new system that was introduced. And I think they  only started to see it then,  under 14, 15, 16 level. We knew there was potential but we never knew there was this much. I think when the structures were put in place properly people began to realise there is massive talent in Tipperary, football-wise, as well as hurling-wise, and if we can tap in to this talent we have a serious chance of making a minor or under 21 breakthrough.

“The strength in the panel is massive. We lost the likes of Colman (Kennedy), Greg (Henry), John McGrath - well we didn’t really lose John he is driving us still from the sideline - it just shows the strength in depth in the panel. And I am sure if we lost another five there would be another five equally as good to step in and take over again and no one would miss a beat,” added a captain confident with his team and hopeful that Tipperary are on an upward curve.

What does your involvement mean to your club, JK Brackens, one of the big two football clubs along with Loughmore in Mid Tipperary?

“I suppose you would like to think there is a sense of pride there. I hope there is anyway. It is massive for the club as we haven’t had many that captained teams for the county. I think there is only myself and one other lad to captain a Tipp team to win a Munster title and he was there the night we went back to town after the Munster title win and it was great to see everyone come out and embrace it. It was massive for the town and that fills my heart too as well as everyone else’s,” said the proud Templemore man.

You talked about the 4 Steps there, you very nearly missed one of them with the injury against Sligo? It must have been a terrible time for you between the league game and the Cork game not really knowing if you would play?

“It wasn’t easy now, it wasn’t easy. You had to pass all the protocols, you had to do everyting and it’s usually a very slow process. All I wanted to do was to go out and play football but the doctors kept saying ‘No you are not allowed. We can’t let you out tonight.’ One night you’d come with a pair of boots and you’d be willing to go, you’d be fresh, you’d be energised and they’d say No, you haven’t passed the tests yet, so you can’t. I suppose the day you pass the test that’s the first day you really think I might be a part of this yet, I might be able to play the Munster final. The first day I passed it I drove down to the field and you let all your emotions out. It’s a great feeling then but up to that there was serious doubts,” he answered honestly.

And would you have had knocks like that before?...

“You get knocks on the head and I am sure that’s not the first concussion I suffered but it’s the first one that’s after being diagnosed. Concussion is becoming a big topic now all over Ireland with the rugby. There is massive protocols gone in there and it is only right. At the end of the day it is a brain injury and your health is your wealth, it’s an old cliche but that’s it. And you’re no good if your brain is hurt and you go playing it’s only going to make it ten times worse,” he said.

“Oh I don’t know about support and they hopping off you in training, they are fairly hitting you hard. But off the field, yeah, they’d be driving you on as we would be driving them on. They are looking at us thinking what could be and we are sort of their role models at this moment in time but coming up to it they were sort of ours. But it’s great to have their support and the support of the county and hopefully we will get a good support on Saturday week.”

You would never know what could happen at senior level down the line....?

“You are always trying to build, you are always trying to improve. Last year, people were saying it was a good year but at the end of the day we lost a match that we should have won and we conceded soft goals, and we should have got further than we did. So for people to say it was a good year, I would question that a bit myself. I suppose the rest of the group of under 21s that are part of the seniors would question it too because they are used to winning. But they are stepping stones that you have to take and this is another stepping stone in the pond and hopefully we can take this one and drive the senior lads on for the rest of the year.”

Finally on the learning process that is football...

“We learned most from the Armagh match earlier in the year when we were two points up coming in to injury time and we should have won that game but we got beaten by a point. You learn from your mistakes and we certainly learned from our mistake and although we were caught against Armagh we were hell-bent we were not going to get caught like that again this year.

“Against Cork we could have been easily and we could have been caught against Dublin when we went two points up and they brought it back level but we pushed on again and that just shows the character in this group of lads,” concluded Captain Colin.