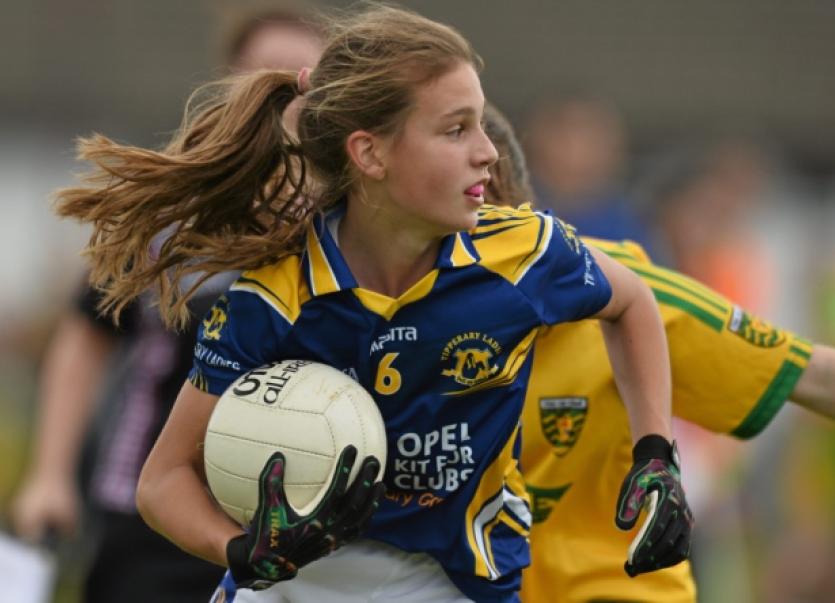 In a busy weekend for Tipperary ladies football, the under 14 side drew with Donegal in the All Ireland final at Ballymahon, Co. Longford on Saturday while the minors beat Waterford in the Munster final.

In a busy weekend for Tipperary ladies football, the under 14 side drew with Donegal in the All Ireland final at Ballymahon, Co. Longford on Saturday while the minors beat Waterford in the Munster final.

In the under 14 showpiece, Tipperary captain Marie Creedon won the toss and elected to play against the wind in the first half. This looked like an inspired decision as Tipperary raced in a 2-2 to 0-1 lead after seven minutes, the goals courtesy of Niamh Martin and Ava Fennessy with Ciara Dwan and Ava Fennessy scoring the points to be quickly followed by another Ciara Dwan point in the eleventh minute.

Tipp’s Caoimhe Ryan and Amy Boyle Carr traded points in the twelfth minute and Donegal added another point in the thirteenth minute. Donegal as Ulster champions soon began to show their pedigree, scoring two goals via midfielders Saoirse Bonner and Sarah Harkin with two points from Kate McClenaghan. At the interval, Donegal led by two points Donegal 2-6 to Tipperary 2-4.

With wind advantage in the second half, Tipperary would have had some confidence that they could bridge the half-time deficit and this was justified within seconds of the restart when substitute Cailin Napier scored a goal with her first touch.

However, from the kickout, Donegal showed this would be no walkover when Amy Boyle Carr raced through the middle to raise the green flag. A further two Kate McClenaghan points were on the score board before Ciara Dwan added a Tipperary point.

As we entered the final quarter Donegal continued to dominate on the score board, adding a further three points to Tipperary’s two in normal time. Donegal added a further two points at the start of injury time to give them a comfortable margin of six points.

However, Tipperary had time to show their own “never say die” attitude in injury time as Caitlin Kennedy blasted a close range free into the back of the net. From the kickout, Tipperary gathered possession and worked the ball in to Ciara Dwan who found Angela McGuigan in front of goal to convert what seemed an unlikely comeback. Final Score Tipperary 5-7 Donegal 3-13

Tipperary had secured themselves a replay this Saturday at a venue to be decided. This Tipperary side have shown their spirit and character on many occasions this season and this never say die attitude was never more evident than in the closing stages on Saturday when faced with a seemingly hopeless situation deep in to injury time.

Tipperary can also be thankful to the goalkeeping skills of Nicola O’Dwyer who kept her side within touching distance during a difficult second half.