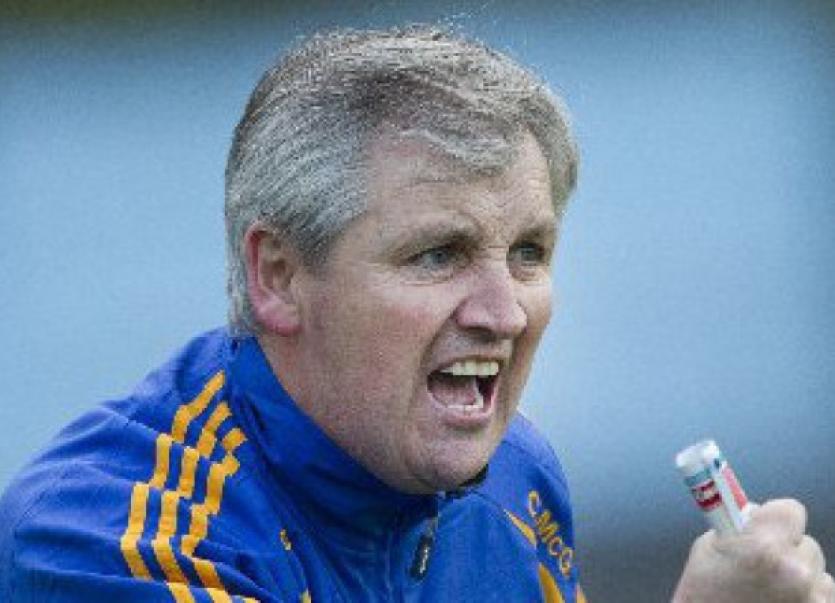 That’s probably not surprising for someone who managed Finn Harps in the League of Ireland at age twenty two and who later guided them to an FAI Cup final.

He brought the experience honed in those days to his new role as Tipp minor boss and immediately set out his targets. Bringing his team to where they are now was one of them.

It was a three year process to start and he needed a core group of young players who would mature into the players he wanted. He picked seven fifteen year-olds in his first year as that core group and they didn’t let him down.

On Sunday he will watch those seven - captain Danny Owens; man of the match in the semi-final Jack Kennedy; Stephen Quirke; triple star (football, hurling and rugby) Alan Tynan, and the Drom/Inch trio of Emmett Moloney, Tommy Nolan and Michael Connors run out onto Croke Park in an All Ireland final.

He didn’t expect to win too much in the first years with such young players but now.....well he thinks they are ready.

“Three of them played in the Munster championship two years ago. Last year we kept players to the age limit down to just four or five to give these boys experience. We could have gone with the players on the age who were average players and save the young fellows or else blood the young fellows if they were good enough and give them a go at it and that’s what happened – the team that lined out against Kerry last year had only four or five to the age and ten under seventeen. You won’t win anything with it but you’ll get the experience and now they are nearly all to the age”, he says.

But that still doesn’t make their task any easier on Sunday - he had to motivate the dual players who returned to the panel following the hurlers’ defeat to Galway, and he also realises that they are facing a Kerry team that are defending champions and who beat Tipp comprehensively in the Munster final. That needs to be turned around.

And while not over confident, he is naturally positive.

“We have got the Croke Park factor out of the way now with the semi-final win over Kildare. There will be a lot of Kerry people there as they are in the senior final too but you don’t have to revisit the worry of how we might react. They have been there now and done it and it should be no different.

“There is no more pressure on a final than a semi-final because you are at the knock-out stage. And with the hurlers, the duals, having been there four times, is a help as well. That balances it a bit again against the backdrop of Killarney for the Munster final which was a very hostile environment where they (Kerry) could just get up in the morning and play and we had to travel overnight and stay. Even though it is a smaller venue, the crowd is much more on top of you. I don’t think there can be any more noise in Croke Park than at that game”, he suggests.

Without making excuses, he described the 12 noon throw-in for the Munster final as ‘crazy’.

“The hardest thing to win is a Munster final, especially if it’s Kerry, because you are conceding everything, time of the day, and you wouldn’t believe how important that is, 12 o’clock throw-in is ridiculous, it’s making a mockery of everything. We had no option but to go the day before. It’s crazy with all that’s going on in Killlarney that weekend, with the cycling, and then add in the Leaving Cert and the hurling. But we just had to get on with it”.

And he accepts some personal blame for that defeat - “I tried to complicate it too much, wanted players to do too much and set the team up in a certain way and we didn’t have time to prepare for it. Since then we have had the time to prepare for it and the small changes and positional switches – we have a different back six but it is a settled back six.”

But he still knows it won’t be any easier on Sunday against the Kingdom. “We expect to be better than we were in Killlarney because we couldn’t be much worse – but will that be good enough to close the gap because they have improved since they played us. We converted eleven opportunities against Kildare and Kerry are averaging fourteen so we need to get to fourteen or fifteen if we are going to win, no question, that’s a given”.

Since losing the Munster final, Tipp have impressied against both Galway and Kildare. “I was quietly confident that we would continue on after Kerry and after Galway – you look at how they come back and how they train and look at the video analysis . Having looked at the match ups and who we are playing and the responses from the group, if things go right we will get there and the last day things went wrong against Kildare and we still got there. We knew if we were still with them at half time we would win it, it would have taken something strange for that not to happen. Emmet (Moloney) going off got in the way of that a little but we were three up at that stage and cruising. We were picking off scores and they hadn’t scored in the second half and we were kicking on a bit – we have finished matches well and Kildare had shown they don’t finish matches well. Minor is fickle and if you concede goals it can throw a team but we have been able to avoid that.”

Tipperary’s wonderful run at both minor football and hurling has excited everyone in the county - but has it tired the players making so many journeys to Croke Park.

“Are you joking me? I find it difficult when some people say these guys are going to be tired and have too much on their plate and too many games. Seventeen years of age, going to Croke Park four times in a row, I cannot believe some people saying that. They are as high as a kite, bring it on. At half time against Kildare, when Emmett Moloney spoke’ it was just let’s get out there. Once the Leaving Cert is over and they are looking forward to going to college and going to Croke Park, it is all positive.”