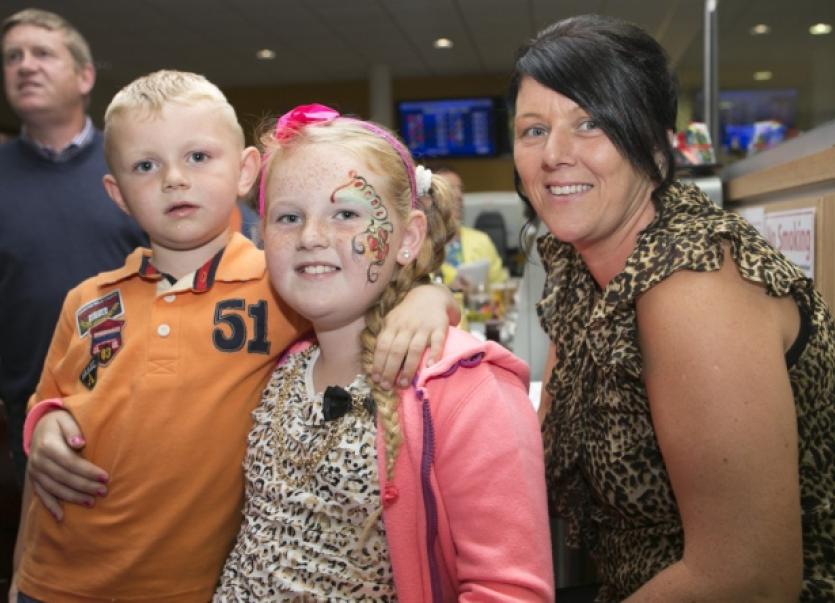 The club, thanks to their membership and support contributed the bones of 5,000 euro to the evening in the shape of extra prize money to the first three in each race, a bag of nuts to all other runners, free entry for all dogs and trophies together with presentation sheets to all winners.

The honour of posting the fastest time of the session over the standard trip went to Rapid Rita which came in as a reserve in the fifth race, an A4 event, and romped home by four and a half lengths in 29.01. The daughter of Express Ego and Clover Petal who was having just her third outing is owned and trained locally by Theresa Wall and Jim Quinlan.

The first of two sprints on the night produced a useful performance from the even money favourite Clipper Carlton (Ja Mann-Tyrur Betty) which came home five and a half lengths clear of his rivals to score for Cahir enthusiast Seamus Shealy in 16.28.

Race 1 (A7/A9) – The 2/1 favourite Trishaterror owned and trained in Ardfinnan by Patricia Looby got off the mark at the seventh attempt by breaking in front and racing clear to defeat Geneva Jane which got up to take second place from Amazing Avril in the home straight.

Race 2 (S3/S5) – Clipper Carlton, the market leader at evens, posted a very useful 16.28 by leading at the opening turn and surging clear to account for Brindle Piper and Run to the Ace by five and a half lengths and a length and a half. The son of Ja Mann and Tyrur Betty had opened his account when winning over the standard trip in Cork last April. He is owned and trained in Cahir by Seamus Shealy.

Race 3 (N1/A6) – Another even money favourite obliged here as Movealong Moral, a son of Moral Duty and Movealong Spice, owned and trained in Kilmallock by Willie Barry, made all in the striped jacket to put his rivals to the sword and romp to a whopping eighteen length win over Aherlow Sterling with Hop Out Spot a short head back in third place.

Race 4 (A5) – Loughteen Tempo at 6/4 became the fourth successive favourite to oblige, a rare occurrence at Clonmel in recent weeks. Wearing the red jacket this son of Ballymac Ruso and Loughlea Rita made every post a winning one for Kilmallock owner/trainer John Dore. Hattys Blueboy chased the leader for much of the race but lost out on second spot to a flying finish from Heathview Daisy which came from a long way off the pace.

Race 5 (A4) – Punters continued in a winning vein when 6/4 chance Rapid Rita gave an eye catching performance to score by four and a half lengths in a best of the session 29.01. This daughter of Express Ego and Clover Petal came in as a reserve in the red jacket and showed great pace on the back straight to challenge Unusual Account and Suir Duke on the approach to the third bend before surging clear to defeat those rivals by four and a half and two and a half lengths. Rapid Rita is owned and trained locally by Theresa Wall and Jim Quinlan and was gaining a second win from just three runs.

Race 6 (S0/S2) – Circus Lion was first to show but Highview Light, in the red jacket, gained command on the rails at the first bend and raced clear. Spindles Dream came with a rattle in the straight but the leader got home by a length from that rival with Circus Lion staying on for third spot two and a half lengths back. Owned and trained by Ian Waterworth in Fethard, Highview Light (Hades Rocket-Coolemount Flair) a 2/1 chance clocked a career best 16.40 to gain her third win from six starts.

Race 7 (A3) – An Charraig a joint favourite at 2/1overcame a tardy start to get to the front off the opening bends and this son of Hometown Boy Nga and Windmill Chick turned on the gas to power clear of his rivals on the back straight and come home two and a half lengths clear of Monroe Storm with Jampot Jim the same distance back in third place. Owned in Cashel by The Six Feet Under Syndicate an Charraig stopped the clock in a career best 29.09 to gain his third success.

Race 8 (A3) – The 7/4 market leader Broc, trained by Kevin McLean for local enthusiasts Edward and Jimmy Farrell, is proving a great servant to his connections and the son of Droopys Vieri and Kerryroad Lucy took his tally of wins to eight by coming from off the pace to lead near the line and score by the narrowest margins over Ruby Rouge in 29.56.

Race 9 (A2) – Riverside Carly, flagged as one to watch in these columns a week ago, was easy to back at 3/1 but justified our confidence by leading at the second bend and staying on resolutely to defeat Tivoli Becky by a length and a half with Watch You Jerry a length away in third place. A daughter of College Causeway and Riverside Trixie owned and trained in Clonmel by Nigel Quinn, the winner stopped the clock in 29.20 just a spot outside her best run to gain a third career victory.

Race 10 (A1/A2) – Johnny’s Legacy (Killahan Phanter – Slimline Again) made all the running in the striped jacket to post a career best performance. Owned and trained by Tommy Caffrey in Dungarvan the 3/1 chance was always in control and surged to a clear cut four and a half length win over the joint favourites Monabrogue Rock and Papa Smurf. The winner was notching up a third career success from seven outings.

The semi-finals of The Rockwell Rovers G.A.A. Club N2/N3 Unraced Stake topped the bill on a damp Thursday evening and produced the best run of the session with the success of the warm 2/5 favourite Exciting Bolt in the opening leg. Owen McKenna’s charge impressed in coming home eight and a half lengths clear of Clonmoyle Jamie in a well strung out field and will take all the beating in this week’s final. Pine Duke was an odds-on chance in the second semi but a slow start proved his undoing and he could only finish second beaten two and a half lengths by Seifton Prince in 29.49.

Race 1 (A7/A9) – Local runners and comrades Purple Mott and Vancouver Conor (Hondo Black-Grenane Misty) dominated this opener and although the latter, making his debut, led on the rails round the final bend his sister, with two runs under her belt, finished with a flourish to take the spoils by a length and a half in 29.63. The favourite Rackethall Micko ran on well following first bend trouble to take third place a length in arrears of the principals The winner, easy to back at 3/1, is owned and trained in Clonmel by Mary Egan.

Race 2 (S5 or Lower) – The favourite Knocknaboha Anna was slowly into her stride from her trap one draw and was nearest at the finish in third place behind 2/1 chance Blu Monty which led on the rails round the bends and drew clear to defeat Pistol Annie by two and a half lengths in 16.68. The winner, a son of Hondo Black and Tyrur Maryann, was gaining a fourth career success and has strong horse racing connections as he is trained by David Hickey, a key member of the staff at famed Ballydoyle, for owners Nikki O’Donnell and Sarah O’Brien, daughter of Aidan O’Brien.

Race 3 (A6) – Monroe Henry headed the market but failed to clear the opening turn as market rival Foulkscourt Way got a dream run on the rails and bolted clear of his rivals at the opening turn to come home seven and a half lengths clear of the strong finishing favourite which took second spot by half a length ahead of Amandas Minx.

Race 4 (A5) – Pure Palomar (Hondo Black – Pure Brief) a 2/1 chance owned and trained by John Duggan gained his fourth career victory by scoring from trap to line in a career best 29.69.

Race 5 (A5) – Fitzafrenic was an even money market leader to break the run of losing favourites in an event which saw the first four home covered by just a length and a half. Funcheon Kudos led from the opening bend to the last turn but had to give best to Riverside Forest on the run to the line. This son of Blackstone Gene and Pine Isle got up to score in a finish of three half lengths with the favourite finishing strongly for third and fourth home Purple Millie noted as another doing her best work in the closing stages.

This second sprint of the evening was won in 16.68 the identical clock recorded by Blu Monty in the earlier two-bender. We had four co-favourites at 2/1 and one of these Rasta Ozzy running in the striped jacket led at the second bend before keeping on to hold the challenge of Soldier Lassie by a neck with Fifth Gear two and a half lengths away in third place.