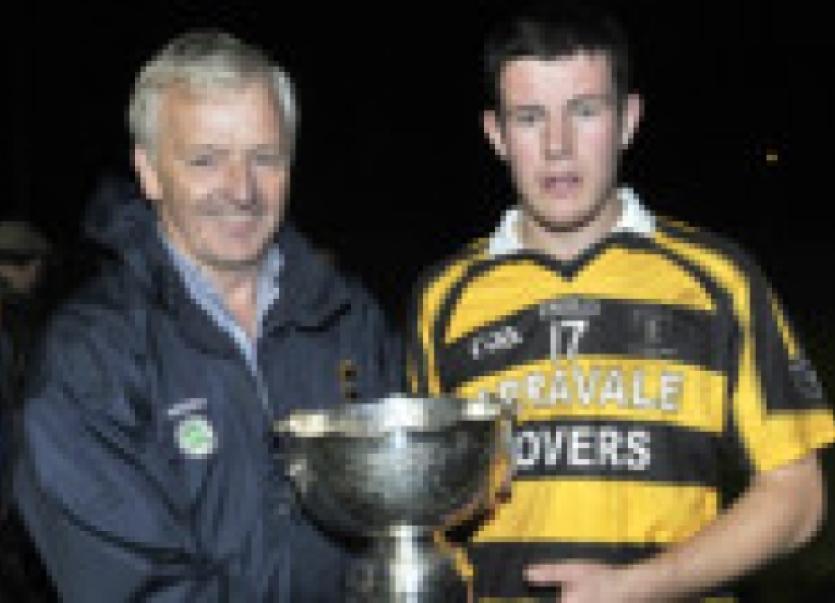 Timmy Dalton opened Rovers account with an early point but Tom Fox replied to level. Arravale went ahead as Dalton added another two points and James Hogan and Damien O’Brien swopped points to leave Arravale ahead 0-4 to 0-2 after twenty minutes. Éire Óg struck for their first goal, Brian Fox did all the hard work for Jeremy Furlong to finish to the net. Éire Óg went a point ahead but James Hogan had the sides level at the break 0-5 to 1-2.

Again after the break Arravale Rovers went ahead, and following a brace of points from Mikie O’Dwyer and one each from Brian Lowry and Donnagh Leahy, Arravale led 0-9 to 1-2 after forty minutes. Then the evergreen Damien O’Brien lauched an Éire Óg revival as he kicked over four unanswered points to have the sides level 0-9 to 1-6 after fifty minutes. Arravale fought back and following a long free from Darren Lowry, which James Hogan broke down in ther Éire Óg goalmouth, Donagh Leahy set up Mikie O’Dwyer to fist the ball into the Éire Óg net. Rovers now led 1-9 to 1-6 with only four minutes remaining. Then Brian Jones was robbed by the excellent Brian Fox who was grounded by Pearse Richardson and ace marksman Damien O’Brien made no mistake from the penalty to level at 1-9 to 2-6. Éire Óg won the kick out but Donagh Leahy turned over possession and sent Rovers into attack and captain Darren Lowry hit a might point from forty metres to win the game and Rovers first ever league title.