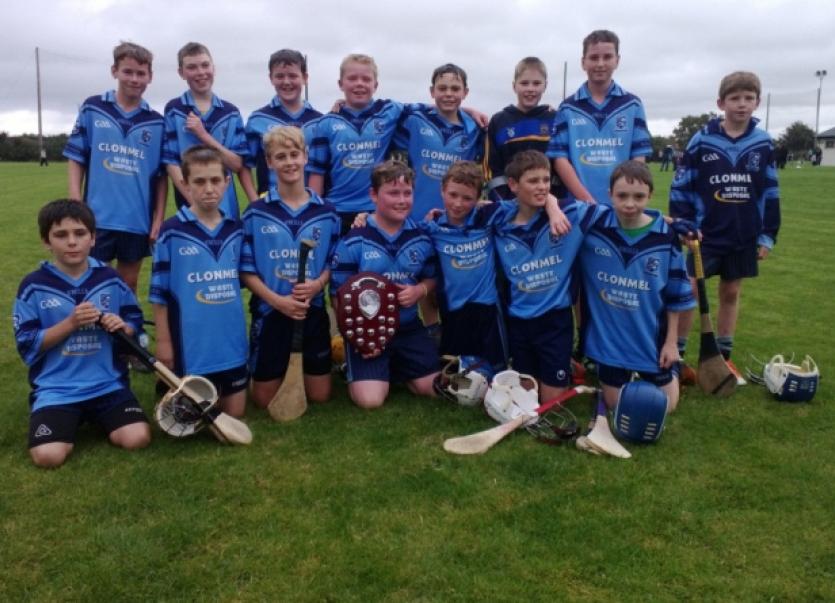 The club sends its condolences to the Davern Family, wife Annmarie, sons Don and Mark, daughter Davina on the death of Noel. Noel was a great friend to our club and opened many doors for us during his time as public representitive.

The final of the Mick McCarthy U12 hurling tournament will take place this Friday evening in Monroe at 7pm.

From start to finish both sides battled hard and sportingly, with Moyle Rovers leading by five points to no score at half time. However, the second half threw up a thriller and saw both sides trading scores evenly.

All players gave it everything they had, with both goalkeepers making superb saves, creating a rollercoaster of emotions among the mentors and supporters.

While Moyle Rovers brought the game to a successful conclusion by a margin of two points, due credit must be given to the Swan players and mentors whose contribution to the game made this a memorable final.

Final score was 2-7 to Moyle Rovers and 3-2 to Carrick Swan.

The minors earned a hard won victory over Aherlow last Saturday evening in Monroe. This was a very good team performance, especially in the second half, and was a just reward for hard graft.

Aherlow made us fight all the way to the last minute though.

Moyle Rovers elected to play with the advantage of the breeze. We started well but Aherlow took the initiative and we found ourselves 1-2 to 0-3 down at half-time.

Both teams upped the ante significantly in the second half. Points from Orla Ryan, Danni di Ruzza and Sarah Everard were followed by a Caroline Quirke goal to give us the lead.

Aherlow however stayed in touch to the very end with some well taken goals.

Last Thursday was the final night of the six-week academy run for under 8 and under 10s. We had a great turnout of players over the six weeks during which saw great displays of determination and willingness to learn.

Under the training guidance of Michael White and Catriona McGrath, also assisting in the previous weeks were our An Gaisce team of Shania Dowling, Derbhile Fitzgerald, Megan Shanahan and Evrena Everard.

On the final night an inter-club blitz was held with all players participating with their new-found skills.

At the end of the blitz medals and certificates of participation were presented on what was a great night for players.

As the academy was so successful training will continue for another four weeks.

The captain and a number of the winning under 12 county final team came to the presentation to show the under 8s and under 10s the trophy and to speak of the confidence it has given them for the future.

‘Halloween Scary’ training on Friday night next at 5.30pm.

Under 10s and under 12s back training this week on Tuesday and Friday nights from 6-7 Tuesday and the earlier time of 5.30 pm.

We thank all our lotto players for their continued support which is much appreciated. Tickets at €2 can be purchased from any committee member.

Clonmel High School were beaten by Templemore in the Harty Cup.

Our special ‘25 game’ in aid of the L’Arche community was a great success. The night netted over €800 which went towards their building fund.

A big thanks to those who donated prizes for the raffle, those who made cakes, etc. and especially to all who played and took part in the raffle so generously.

Game every Tuesday night at 8.30 all welcome.

The November County Board Draw will be held in the Half Way House Rathronan on Friday 1st. November at 9.15. Presentation of car to Maud Moore will also take place.

A big thank you to all of our draw supporters.

A Mass for deceased club members will be held at 19.30 in the Social Centre on Friday 22nd November

Gaelic Football continues every Tuesday. This is an introductory programme open to boys and girls, and will run for the next five weeks in The High School Hall from 6 to 7 pm. Contact Brian Gentles 086 8373150 for more information.

At time of writing we anticipate a fixture vs. Cahir this coming weekend. Keep an eye on the Facebook page for updates

Ned Hall Park was the host venue for the South Hurling Championship where we were drawn in a group with Mullinahone, Fethard, Ballyneale and Kilsheelan. Conditions were far from ideal but our boys acquitted themselves very well.

We lost our opening game against Fethard by a point and Mullinahone were too strong for us in the second match. We played some of our best hurling in the third game against Ballyneale, and recorded a good win. However, we couldn’t build on this and went down in the fourth game to eventual champions Kilsheelan by a solitary goal.

Over the course of the day we had excellent performances from all our boys and with a rub of the green we would have had more victories.

Well done to our three pugilists who took part in the Tipptoberfest Boxing event in the Clonmel Park Hotel on Friday last. Hats off to Gino Lonergan, Matthew Norris and Darren Boland

We are delighted to share the news of the arrival of baby Ellen Jennifer Gregory to proud parents Mark and Amanda on 24th October 2013. Well done to you both!

Sunday November 3rd is County Final day and our minors will continue their preparations over the coming weekend.  The game is fixed for Boherlahan at 12.00 noon and the opposition of Drom & Inch will prove formidable.

Over recent years the Mid Tipperary club have become a real force in football and they will be difficult to overcome.

Commercials have performed well to date and retained their South title with a thrilling win against Moyle Rovers. The semi-final against Newport saw the team’s performance drop considerably, and a repeat of this in the final will see the relinquishing of the crown held by Commercials for the past three years. There is no doubt that the players are capable of defending this title but will be wary of the test that the Mid champions will provide on Sunday.

The Commercials side is captained by Kevin Fahey and the club’s senior defender has led by example.  Padraig Looram, Paudie White, Robbie Lyons, Stephen Kelly, Ross Peters, Ross Dennehy and Liam Ryan are others that have played well in the championship to date.

The introduction of a Munster Minor Club Championship this year adds further to the prestige of this final.  While it would be nice to be Tipperary’s first representatives in the provincial championship, only a win on Sunday week will see this happen.

The members of the 1969 and 1971 County Senior Champions are being honoured at the Senior Football Final in Thurles next Sunday at half time. It is such a pity that the Minor Final was not fixed for the same venue

Clonmel Commercials Under 10 team took part in the Johnny Cummins Annual Tournament in Ardfinnan on Saturday last. The day started with nice weather but finished up in horrendous conditions.

Our first game was against Kilsheelan and it proved to be a tough game, hard fought all through with our lads just edging out by 2 points on a scoreline of 4-3 to 4-1, there were some great passages of play from both teams in this game.

Next up were Newcastle and this game was killed off quickly with a couple of quick goals giving us a half time score of 4-2 to 1-0, the condition worsened in the second half of this game and the team coming on were finding it hard to get going but after a dogged second half we ended up winning by 5-2 to 1-1.

Ballyporeen were next up and again a strong first half was the key to the victory winning on a scoreline of 6-2 to 0-0. At this stage all boys had played 3 half games each and were getting better as the day went on.

The Group 1 Final pitted us against old rivals Ardfinnan. The conditions for this game were making it difficult, but the Commercials boys saved their best until last, producing a massive display of skills, determination and bravery in conditions that adult players would find it difficult to manage. Having played with a howling wind in the first half the lads led by 3-3 to 1-1. In a 2nd half that had everything good in the game, Commercials really came to the fore and despite the prolonged 2nd half, ended up winning out by 6-4 to 2-3 with some brilliant performances by the young lads in testing conditions.

Thanks to Johnny Cummins for the invite into the tournament and to the Ardfinnan club who had everything running like clockwork on the day. There was a parade to start the day which was thoroughly enjoyed by all. Over the course of the games played, Commercials scored 21 goals and 11 points conceding 7 goals and 4 points.

The draw was held in Eldons on Sunday last. The jackpot now stands at €1,600.

Fortnightly tickets are available for €2.  Alternatively for a fee of €25 you can join for 6 months or €45 for a year’s subscription. Tickets and brochures are available from committee members and players of both clubs.

The club is holding a scrap collection for the next two Saturdays in the Sportsfield between 10.00 a.m. and 14.00 p.m.

Contact Joe at 087-2417381 or any committee member for further information.