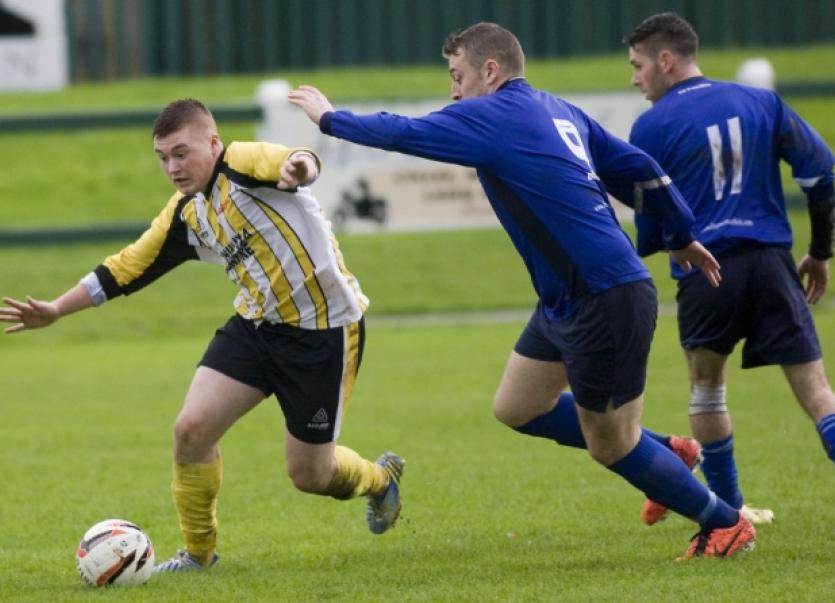 Before a good crowd on a wet and windy Bank Holiday afternoon in Cooke Park, Burncout Celtic produced a fine performance to win their first ever Division Three Shield title.

Before a good crowd on a wet and windy Bank Holiday afternoon in Cooke Park, Burncout Celtic produced a fine performance to win their first ever Division Three Shield title.

After a well observed minute’s silence for the sad loss of Cahir’s Billy Purtill last week, both teams settled down in a tight and tense first ten minutes.

The definitive moment of the game came early. A quick breakaway from a St Kieran’s attack, brought the Burncourt captain Kieran O’Dwyer down the right wing, and he crossed magnificently for the onrushing Pa Ryan to round the St. Kieran’s keeper and coolly slot the ball into the bottom corner of the net.

It was a quarter of an hour before St. Kieran’s had a chance to reply, but a full stretch save from the Burncourt keeper kept the game level. He then tipped away a header from the resultant corner and Burncourt survived with their lead to the break.

With the weather turning nastier now, it was hard for both teams to play football, but they did try gamely and chances began to flow as players tired. On the 70th minute St. Kieran’s were desperately unlucky not to get back to parity when Johnny English headed past the post. However, five minutes later, Burncourt had an opportunity to put the game out of sight when Niall Halley crossed to an unmarked Johnny McMahon, who inexplicably side footed wide of the post from less than four yards out. They were almost made to rue this miss with five minutes left a mix up in the Burncourt defence saw the ball fall to St. Kieran’s Pa Cummins who drove across the box but also outside the far post.

The last chance to level came in injury time, when St. Kieran’s had a penalty shout waved away and as the full time whistle sounded, it was the Burncourt who were celebrating their historic victory.