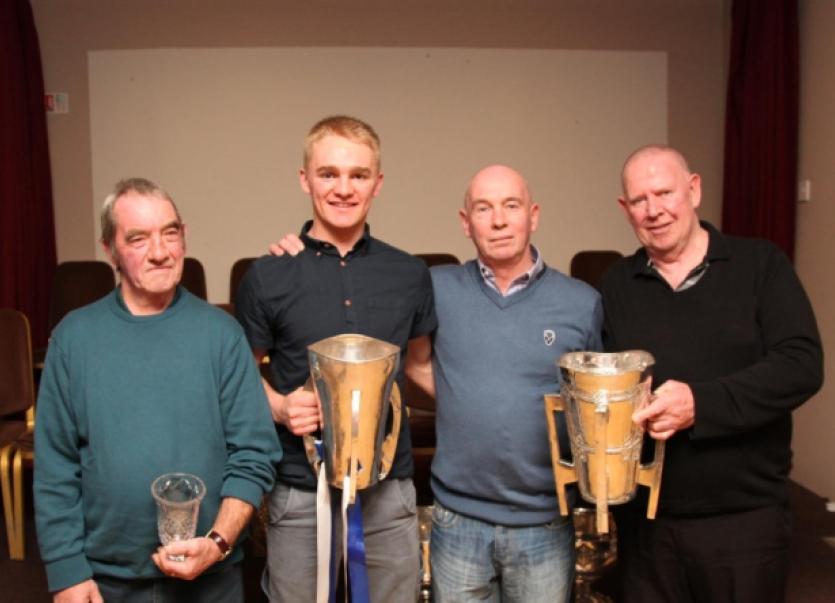 Tipperary, Waterford and Kilkenny GAA stars from the past and present were honoured at the annual Maurice Davin Awards in Carrick-on-Suir just after Christmas.

Tipperary, Waterford and Kilkenny GAA stars from the past and present were honoured at the annual Maurice Davin Awards in Carrick-on-Suir just after Christmas.

The awards, named after the GAA’s co-founder and first President Maurice Davin from Deerpark, Carrick-on-Suir, recognise the achievements of inter-county GAA stars from the three counties, players from Carrick-on-Suir’s Swan, Davins and St. Molleran’s GAA Clubs as well as Piltown GAA Club.

Tipperary hurling legend Jimmy Doyle presented the awards at the awards function in the Carraig Hotel on December 27. Among the guests were two great grandnephews of Maurice Davin, Pat Walsh and Alan Faulkner.

All proceeds from the awards ceremony were donated to St. Brigid’s Hospital in Carrick-on-Suir.

Lee Mackey from Carrick Davins GAA Club was first to be honoured for his role in London’s Christy Ring Cup win in 2012.

The Tipperary Intermediate team’s manager, Michael Ryan of Fethard, received an award for his work in guiding the county team to winning the All-Ireland title two years in a row.

Ned Walsh of Piltown Gaa Club, Lal Holden of Carrick Davins GAA Club, Patsy Murphy of St. Molleran’s GAA Club and Danny Walsh of Carrick Swan GAA Club were all awarded for their contribution on the playing field for their respective clubs down through the years.

Inter county hurlers of the year awards were presented to Kilkenny All-Star Paul Murphy,Tipperary Senior Hurling team captain Brendan Maher and Kevin Moran from Waterford. Kevin Moran was unable to attend the ceremony, so Waterford County Board Chairman Tom Cunningham accepted the award on his behalf.

Meanwhile, William Hahessy from Rathgormack, who is a student of Carrick CBS Secondary School, won the Young Hurler of the Year gong for his role in Waterford Minor Hurling team’s All-Ireland final victory in September.

Damien Byrne was presented with the Waterford Hurler of the Past award for his many outstanding displays at corner back in the blue and white.

Nenagh hurling great Michael Cleary received the Tipperary Hurler of the Past award. Many remember Michael for his famous goal in the 1991 All-Ireland final in which Tipperary defeated Kilkenny.

The Kilkenny Hurler of the Past award went to goalkeeping legend Noel Skehan. The Bennettsbridge man has nine All-Ireland hurling medals and 14 Leinster title medals.

The Maurice Davin Awards Committee said it wished to thank all who contributed to the event’s success including local newspapers and radio stations in the three counties. The Committee also thanks Patricia in Carrick Print for assistance with tickets and posters, Paul Norris for sponsoring the crystal, John Maher for making the wonderful pieces and the Carraig Hotel.