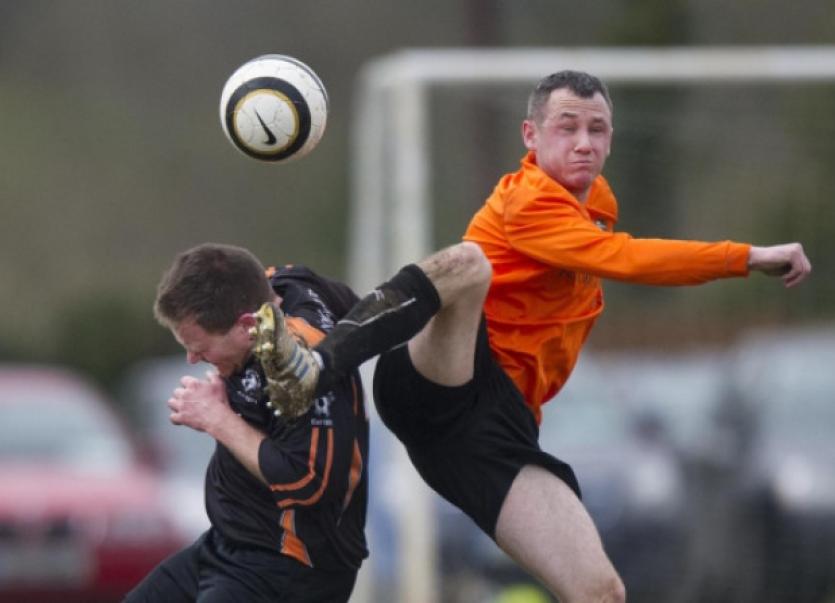 The Wilderness lads were disappointed to exit the Premier league last season, but this comprehensive win over fellow promotion hopefuls Rosegreen, pushed the home team within one more win of regaining the top flight status they crave this year.

Nonetheless while it may not seem so on first sight, this was a trickier game than the scoreline suggested and the visitors gave as good as they got for at least the first period of the game.

A Ger Kennedy goal from the penalty spot after only three minutes gave the home side the lead, and looked to have set them up for a straightforward task, but Rosegreen equalised six minutes later when Daithi Bargary fired home from ten yards out.

The game was nip and tuck after that, with both sides having chances, but it was Rovers who regained the lead just on the half hour, when Kennedy benefitted from a tap in, after great work by Mick O’Hara inside the visitors box. Rosegreen responded well again to this setback, but five minutes before the break the game turned completely against them, when they had a player sent to the line for a deliberate hand ball.

They were only a goal down at the turn, but within three minutes of the restart, were 4-1 down, when Kennedy completed his hat trick on 46 minutes, and two minutes later, Harry O’Connor scored from 20 yards out.

All defensive discipline from the away team collapsed after that, and on 56 minutes Ross Condon made it 5-1, before Ian Barnes made it six ten minutes later.

Michael O’Hara completed the rout eight minutes before the end, when he got the goal his overall work rate deserved, and Rovers took the three points easily enough from what could have been a very sticky fixture on paper beforehand.

Both these teams went into Sunday’s game harbouring promotion hopes, but it was the home side that were victorious and carry on that hope into the final straight of this year’s First Division promotion race.

The game started slowly, with both teams wary of making early errors, and the only real chances of the first half fell to Alan Riordan of the Saint’s, and Cullen’s Alan Hayes, both of whom forced saves from the respective keepers.

The game opened up after half time, and Mark Flannery finally broke the deadlock with a goal for the home team when he was put through by good work from Liam Murphy. This stretched the game, and Cullen began to dominate with more chances coming their way, the best being from Timmy Heffernan who cracked a shot against the visitor’s crossbar.

The home side finally secured the points 15 minutes from the end however, with an unstoppable header from James Power leaving the visitors keeper with no chance, and the home side with a continuing fighting chance of making it to the Premier League by season end.

The boys from Borris moved into second spot in the First Division with a clinical performance against relegation bound Rovers team on Sunday morning, as they begin to stake their claim for a place at the top table of South Tipperary football.

They opened the scoring after a quarter of an hour with a good strike from Martin Darmody and doubled their lead at the break when William Mc Carthy fired home 15 minutes later. A second from Darmody on the hour mark seemed to have secured three easy points, but Killenaule tried to make a fight of it, and pulled a goal back through Andrew Hanly five minutes later.

It was a short lived comeback though, and 20 minutes from the end, Tony Flanagan restored the home sides three goal lead, before the game and the points were wrapped up by a Richard Mc Carthy strike in the 80th minute, to continue his teams promotion hopes.