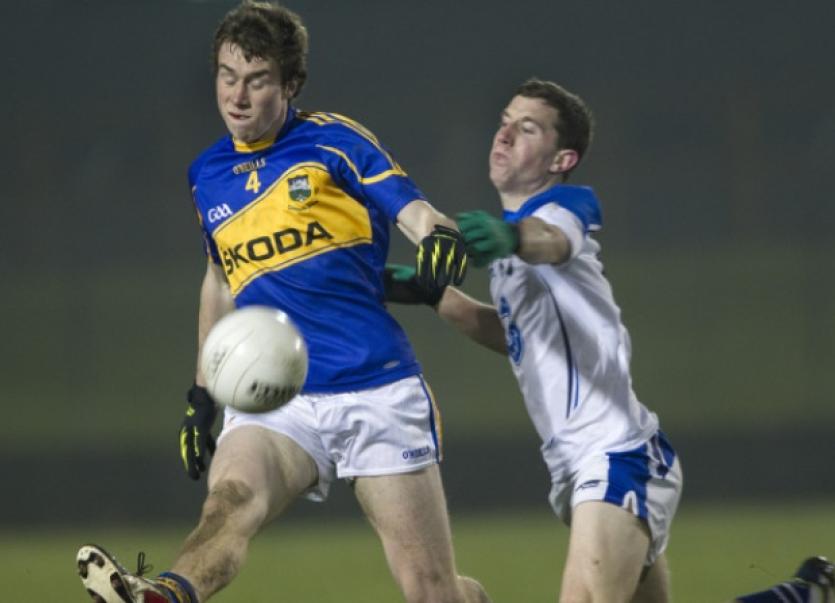 As expected the highly rated Tipperary u-21 football team advanced to the Munster semi-final with a win over  Waterford last Wednesday.

As expected the highly rated Tipperary u-21 football team advanced to the Munster semi-final with a win over  Waterford last Wednesday.

The first round championship game played at Fraher Field, Dungarvan was much more comfortable than Tipp would have imagined, and was over as a competitive contest as early as the 20th minute.

Powered on from midfield by a majestic display from Colin O’Riordan, Tipp virtually owned the ball in the early stages and had nine unanswered points on the board before Waterford opened their account with their only score of the first half, a 22nd minute well-worked goal finished by David Hallihan.

Tipp, starting with 10 of the All-Ireland minor winning team from 2011, went about their mission in a business like manner from the first whistle. Sean Flynn opened the scoring with a free in the second minute, followed by eight from play coming from Greg Henry (3), Michael Quinlivan (2), Josh Keane, Sean Flynn and John McGrath.

The home side were being pinned back in their own half with the Tipp midfield pairing of Steven O’Brien and particularly Colin O’Riordan lording it in the air and Seamus Kennedy and Ian Fahey also prominent around the centre.

A shoulder injury for Ross Mulcahy and a dead leg for Michael Quinlivan forced a double substitution for Tipp as early as the 20th minute and perhaps it was this disruption that caused their only first half concession.

Four Waterford forwards combined through the centre culminating in Hallihan’s goal. This fillip uplifted home spirits and in the run up to half time the Decies battled well with Kevin Sheehan, Seamus Keating and Gavin Nugent becoming much more involved.

Quinlivan’s first half replacement Liam McGrath opened the second half scoring after just 25 seconds following a nice Tipperary move. However it was Waterford half-time sub, Niall Donnelly, operating at full forward who was next on the scoreboard with a cracking goal three minutes in. Indeed a minute earlier the Dungarvan man had another chance of a goal but wasn’t clinical enough at the crucial moment.

Tipp having had the vast majority of possession and dominance now led by a barely believeable four points. It was a wake-up call for David Power’s side and they responded like a good team should.

Greg Henry with his fourth point in an excellent performance from the Killenaule man quickly steadied the ship.

Five more points in the next 10 minutes put  everything back in proper order for Tipperary.

Sean Flynn pointed a free, followed by a great score from play from Steven O’Brien (his last kick of the game before substitution) with further points from Josh Keane and then the Fahey cousins, Kevin and Ian raising a white flag each.

At 0-16 to 2-0 halfway through the second period it was definitely game over.

With this Wednesday’s trip to Miltown Malbay and a game with Clare foremost on the manager’s mind, Tipp emptied their bench in the last quarter.

It took until the 49th minute of the game for Waterford to record their first point, a fisted effort by Kevin Sheehan getting on the end of a 45.

Tipp had three further points from Bill Maher, Liam Casey and a Liam McGrath free before Waterford completed the scoring with another point from Sheehan and a late free from Gavin Nugent.

Mission accomplished for Tipperary but there will be much stiffer tests ahead in hopefully a long campaign.