Promotion now on the cards as Tipp stay unbeaten 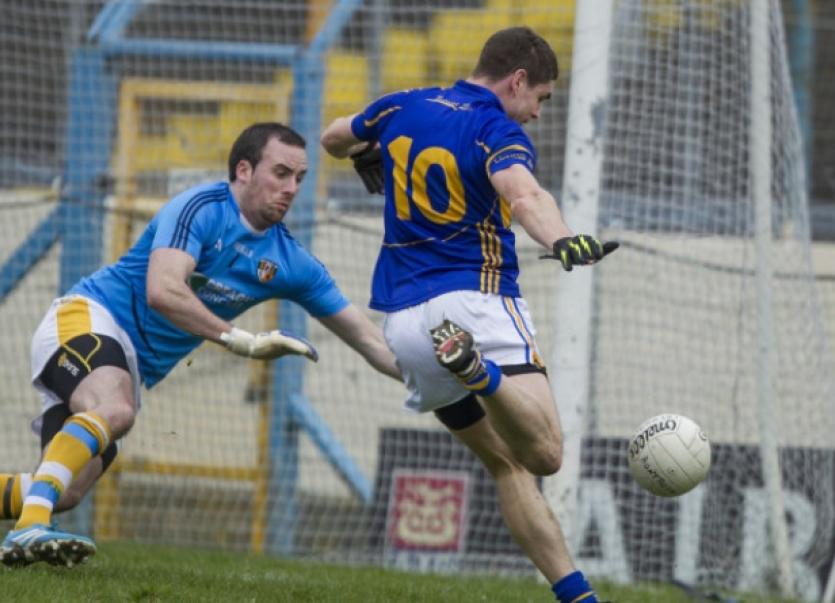 In an unusually free-flowing and very high scoring game, before an attendance of just 217, the home side seemed to take a long time to settle but once they did they always looked like having just enough in reserve to win.

With four wins and a draw from five outings to date, a win on Sunday week next away to Leitrim will guarantee Tipp promotion to Division 3 for next year. For the advancement of the game in the Premier County, regular football at a higher level than Division Four is a must. Victory in Carrick-on-Shannon or at home to Wicklow in our final outing of the campaign will guarantee as much.

Antrim came to Thurles with serious intent and had the better of the opening 20 minutes of play against a Tipperary side that looked noticeably flat and tired at times. The pattern was point for point for the first 20 minutes at which stage the sides were level at 0-4 apiece.

In that opening period Brian Neeson, operating in the full forward line for the Saffrons, kicked two sweet points and would bag 2-8 by the end of the hour with the other early Antrim points from Patrick McBride and Michael Pollock. Tipp’s first scores were from Michael Quinlivan, a Conor Sweeney free, Conal McCullough and Brian Fox.

Neeson, ever a handful for the Tipp rearguard, had the game’s first goal in the 21st minute. A breakdown between Peter Acheson and Brian Fox allowed Niall McKeever to race through the middle and his pass was converted to green by the pacy Neeson.

The setback awakened Tipp and in the 14 minutes before half-time they upped their game noticeably and scored 2-5 to Antrim’s 0-2.

Barry Grogan, very quiet in the early stages, kicked his first point in the 23rd minute followed by an effort by Philip Austin from all of 40 metres.

Tipp’s first goal was a nice move with Quinlivan feeding Sweeney who in turn found Grogan to blast home.

George Hannigan and another Grogan point kept the momentum going before Conor Sweeney had Tipp’s second goal in the 33rd minute after good approach work by Brian Fox and Donagh Leahy. With the last kick of the first half Grogan converted a 45 after Austin’s goal chance was turned around the post by Chris Kerr in the Antrim goal.

In that dominant period for Tipp all Antrim could muster was a Brian Neeson free and a point from Michael Pollock.

At half-time Tipp led 2-9 to 1-6 after being in bother for long periods in the first half.

The Northerners had the strong breeze for the second period and had narrowed the gap to just three at 2-12 to 1-12 by the 47th minute, including a worrying three-in-a-row of unanswered points.

Antrim’s six points in this spell were from Kevin Niblock, Niall McKeever, Michael Pollock, Michael McCann and another pair from Neeson. Tipp’s three points were Philip Austin’s second half opener and two frees, one each from Sweeney and Grogan.

The game’s crucial moment followed and redirected the flow of the game towards Tipp. Antrim midfielder Niall McKeever was black carded for a jersey pull as Donagh Leahy was about to shoot for goal and Grogan for the second Sunday in a row blasted a penalty into the Killinan end goal.

Sweeney and Neeson then added two points a piece before Antrim had their second goal of the day in the 59th minute, accredited once more to Neeson even if it might have gone in off Tipp’s John Couglan. It was of the softish nature and the Tipp rearguard won’t be pleased with its concession.

Again the margin was back to just three points, it seemed the Ulster boys were defiantly saying ‘No’.

Three points though was as close at they would get and over the remaining 10 minutes Tipp outscored Antrim by six points to three to win by a half dozen in the end. Tipp’s late points were three apiece from Grogan and Sweeney, two of which were Grogan frees, while Antrim replies were from Justin Crozier, Ronan McGrady and a late free from Brian Neeson.

Antrim’s Benny Hasson was black carded late on, the second of the game.