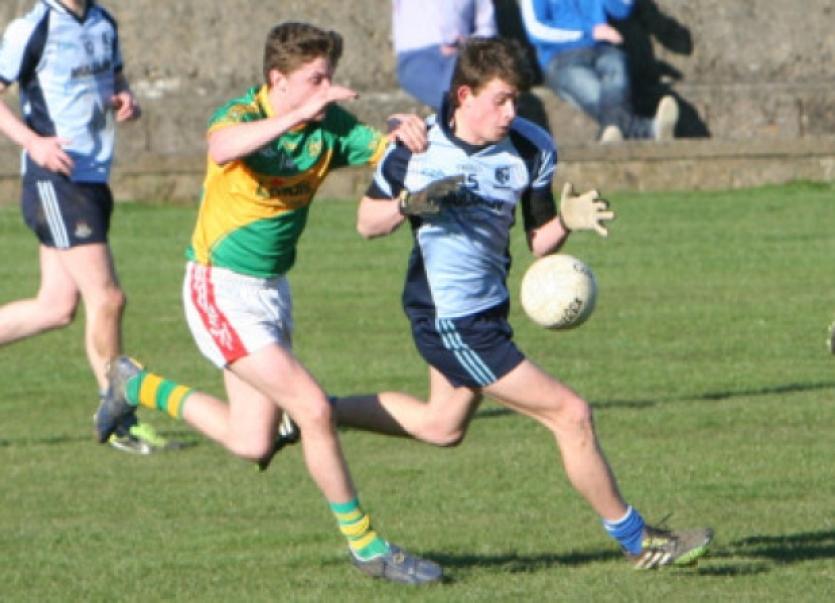 Moyle Rovers will be left scratching their heads wondering how they lost this South under 21 semi-final played at Kilsheelan on Saturday afternoon.

Moyle Rovers will be left scratching their heads wondering how they lost this South under 21 semi-final played at Kilsheelan on Saturday afternoon.

Having led from the throw in they were only caught by Commercials with the last kick of the ball when Michael Quinlivan pointed a free to force extra time.

Helped by an Ian Fahey goal during the first half of extra time, Commercials were superior in the two periods and reached the final with nine points to spare.

A hugely entertaining game played in a wonderful spirit looked like causing an upset and sending the championship favourites out but they showed excellent character and spirit to stay in the game and dig out a win.

Moyle Rovers, playing with the aid of a strong breeze, raced into a four point lead inside ten minutes and were completely dominant. Points from Craig Condon and Kevin O’Donnell were followed by a brace from full forward Conor Conneally and already an upset was on the cards. Not only did Moyle Rovers lead on the scoreboard but they were winning the battles all over the field.

Danny Owens, Riain Clancy, Craig Condon, Luke Boland and Philip Quirke were dominant as Commercials struggled to get into the game. It took twelve minutes before Commercials registered a score when full forward Michael Quinlivan pointed from the left. Rovers responded through a free from Conneally. Two points apiece before the break saw Moyle Rovers take a four point advantage into the half-time break.

Commercials needed a good start to the second half and they got it. Two points from Quinlivan and another from Ian Fahey reduced the margin to the minimum just eight minutes into the half and suddenly Commercials were playing with a real sense of purpose and were looking dangerous. They received a further setback however when Aiden McGrath goaled after the Commercials rearguard was prised open.

Now the half time lead was restored and Commercials had to start again in an attempt to bridge the gap. McGrath’s goal though would be Moyle Rovers’ final score of the game as slowly Commercials crept closer. The dismissal of Luke Boland on a black card midway through the half was a big setback to Rovers. Ian Fahey was now on the edge of the square and Quinlivan was operating out the field to huge effect.

Seamus Kennedy too was getting into his stride and Commercials were now playing most of the football. Two frees from Quinlivan and a brilliantly taken 45 by Ian Fahey reduced the margin once more to a single point with just two minutes remaining on the clock. Fahey’s conversion was from close to the right hand side line and was an impressive kick to give his side a chance. When Seamus Kennedy gained possession in the dying seconds and drove at the Rovers’ defence there was real danger on the cards.

The centre back was fouled 30 metres from goal and as Quinlivan stood over the ball he knew this was the last chance to draw the game. As was the case all day his kick was superb and so Commercials were finally back on level terms.

After a pulsating hour’s football extra time proved a disappointment as Commercials took over and the game fizzled out as a contest. Five minutes into the first period Ian Fahey ran through the backline and deftly put the ball past Tommy Morrissey and this gave Commercials the lead for the first time in the game. Six more points followed as the town side dominated proceedings and booked their place in the divisional decider. Moyle Rovers lost nothing in defeat but will feel that this is one that got away. But the will rue the fact that they went the last 21 minutes of normal time and the entire 20 minutes of extra time without scoring.

For Commercials it is into a final against Ballyporeen. They will need to improve.