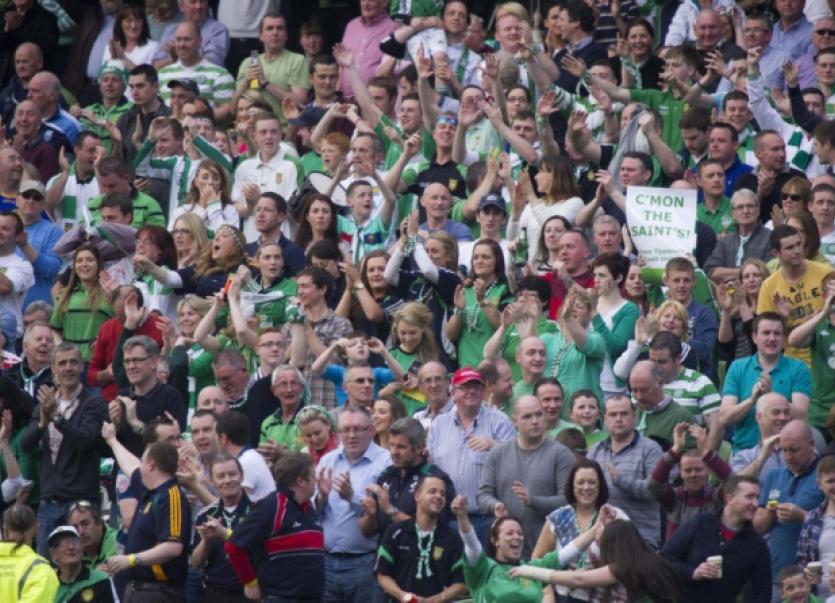 Forty shades of green and white, nervous, expectant and excited. All anxious to get the most coveted seats in Tipperary last Sunday morning.

Forty shades of green and white, nervous, expectant and excited. All anxious to get the most coveted seats in Tipperary last Sunday morning.

County council seats? No, seats on the train to cheer on the mighty Saints from Tipperary Town, as they ventured to the famed Aviva to bridge a 40 year gap at the top table of Irish Junior soccer.

There’s very little left to say about this team, who have been all conquering this year, that hadn’t been said but no matter, in a two horse race, despite the confidence, was there a tiny niggling feeling in the back of the mind that they might stumble at the final hurdle? Not a chance.

Green was the colour of the day, and as the supporters flowed into the Junction the stream became a river, and the river a flood, not only from the town, but from all around the league, the country and even from abroad, all wishing the boys the best.

Players and supporters of rival clubs, suspending hostilities for the day, in solidarity with Chalkie, Breeno, Chucka and the rest, and proud to say that they played beside them in the best football league in the country. Young and old came, members of the last Michael’s team to lift the Junior Cup, and poignantly family members of some who never got to see it again, but who no doubt were looking down on the boys, not just on Sunday, but all year as they made this scarcely believable journey.

The train rumbled along through Thurles where not far away, anxious candidates were still awaiting news of other seats, but the only question of policy on the Tipp train was whether the lads should go all out and finish Ballynanty off quickly or soak up whatever was thrown at them and leave their supporters on tenterhooks like they did in Clonmel last weekend, before lifting them to ecstasy in the final moments of the game. For all, it didn’t matter how it would be delivered, so long as the Cup would make the trip to Tipp in the opposite direction that evening.

When they finally alighted in Dublin, to be caught in another swell, this time of screeching youngsters, concert bound for Croker, they had to explain that they were going in One Direction also, and were just as excited as little children when they found the Aviva resplendent and awaiting the Tipp invasion.

Red carpet treatment for the players as they came out in front of their fans, they left them waiting only twenty minutes before Jimmy Carr gave a decent impression of a young Johann Cruyff, upended his marker, and crossed to David Slattery sending the Saints on the march. A goal up at the tea break, not good enough for Jason on the line, so he sent his boys back out to finish the job, and they did in style with three more strikes to no reply, giving them one of their most emphatic wins of the year on the most important day of all.

Four zero on the scoreboard, 40 years of hurt, finally put to bed. James Walsh, lifetime Saint, lifetime legend, history making International, bedrock of defence could finally say, he’s done it all. He lifted the trophy high over his head and started the singing, the Saint’s were marching home. And the cup was coming with them.

Twelve hours later they were back in The Junction, even giddier now than earlier, eager to walk behind the team and the colours up the main street of Tipperary Town, where the street was thronged with fans, family and well-wishers proclaiming the returning warriors after their victory. Lowry’s was going to be busy. By then all of Tipperary was. The colours were still fluttering in the breeze, still as vivid as the memory of the victory hours before.

The team of ’74 will never be forgotten, if anything they’ve come back into the collective spirit of the St Michaels club and been renewed. A proud club, with an even prouder history. Hopefully it won’t take 40 more years to bring the famous old cup back again. But for now, it looks well on a small shelf in Cooke Park. With 40 green and white ribbons.