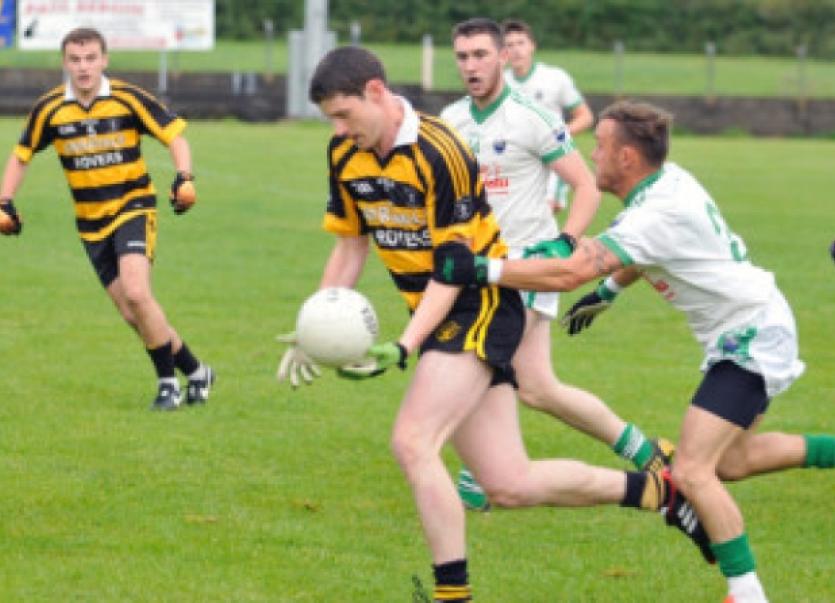 The old adage says that goals win matches ,and so it was for Cahir last Saturday evening in New Inn as two fairly evenly matched sides slogged it out in the Round 3 of the Clean Ireland County SFC.

The old adage says that goals win matches ,and so it was for Cahir last Saturday evening in New Inn as two fairly evenly matched sides slogged it out in the Round 3 of the Clean Ireland County SFC.

Cahir now have three wins under their belts as the face Commercials in the crucial final round game,while Arravale Rovers have completed their league rounds and also are on six points.

It was Arravale Rovers that started in sprightly fashion with two early pointed frees from James Hogan.Then Bryan Lowry popped over another two,one from a free, before Cahir opened their account after 12 minutes when Benny Hickey landed a point from a free.

Three minutes later a miskicked free out on the left wing from Hickey bounced off the Rovers keeper and the wily Padraig Whelan was on hand to send the rebound to the net.

In the second quarter the sides were level on two occasions.Benny Hickey kicked over another three points for Cahir,while Arravale Rovers could manage only another two points from a James Hogan free and another from Bryan Lowry.At the break Cahir led 1-4 to 0-6.

Early in the second half Mikie O’Dwyer pointed to level the sides.Benny Hickey and Padraig Whelan then put Cahir two points ahead and Steven Quinnn reduced the lead with a point after 40 minutes. Cahir struck back and points from Padraig Whelan and Niall McKenna put a goal between the sides 1-8 to 0-8 with just ten minutes remaining.

TheRovers fought back and subs. Pakie Bourke and Brian Jones reduced the deficit to one point with seven minutes remaining.However Cahir finished the stronger with points fron the talisman Benny Hickey, Niall McKenna and captain, James McGrath. The Rovers replied with a pointed free by Bryan Lowry.

Despite the good start by Arravale Rovers,they failed to mantain the momentum, and ran out of steam.The physically stronger Cahir side made their presence felt.Gerard Hally at full back was outstanding and got good support from Mikey O’Connor and Sean O’Connor.Diarmuid Tarraant and Liam Casey dominated the middle third,with Paddy O’Flahert also playing a supportive role.

James McGrath and Padraig Whelan also did well.The Rovers side were short five regulars and they were sorely missed.While they struggled around midfield the inside forward line were unable to make much progress.The full back line of Tony Byrnes, John Hayes and Pearse Richardson did well despite the incessant second half preessure. Robbie Kiely played his heart out while Conor McManus, Bryan Lowry and Steven Quinn also had their moments.