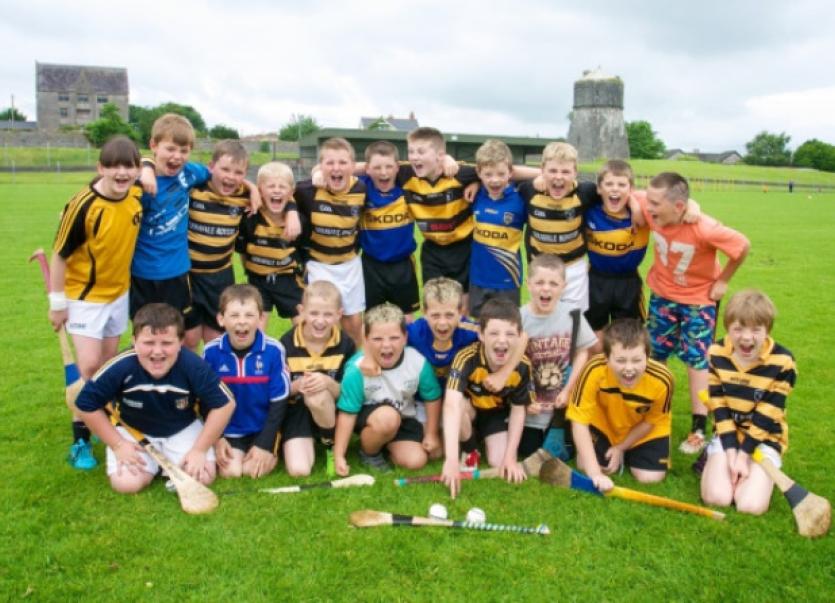 There was great fun and great camaraderie at the Arravale Rovers Juvenile family fun day in Sean Treacy Park recently to celebrate a successful juvenile season.

There was great fun and great camaraderie at the Arravale Rovers Juvenile family fun day in Sean Treacy Park recently to celebrate a successful juvenile season.

There were various different activities and fun games for the young players to participate in including; penalties, long puck, target practice, an obstacle course and the popular tug of war.

The U10’s and U12’s coaches Will Power, Richard Lohan and Eoin Hogan organised the players ensuring they got to enjoy all the activities available and seniors Cormac Maher, Jordan Doyle and Conor Leahy helped out on the day.

“We love hurling,” shouted Eoin Doocey and Gavin O’Meara as they practiced their long puck.

Michael Crowe, PRO for Arravale Rovers Juveniles, explained that the year was very productive for the youngsters in regards to getting experience in big games and learning curves from these important matches.

“The U10 and U8 teams played huge numbers of blitzes in both Hurling and Football during the year travelling to places like Thurles, Aherlow, Golden and holding blitzes in Sean Treacy Park. In these blitzes our teams played against numerous teams from all parts of Tipperary. It was great for the young teams to get matches under their belt especially against such varied opponents.”

Chairperson Billy Ryan was hands-on at the fun day and is very proud of the young players.

“Our best achievements this season was winning the West football U12 A and the West Football U12 D. We hadn’t achieved this for six years and it’s a fantastic achievement for the club. We’re going well in the U12 hurling also and we’re expecting great things for U16’s team.”

Hurling in the U12 grade is ongoing at the moment with both the Under 12 A and B teams still involved in divisional semi finals. The Under 14 Hurlers are currently playing in their own championship and they are still in with a great chance and the U11 team was successful in The Garda Cup overcoming Golden in the final in New Inn.

“Our U14 footballers had a tough year this year as they did not get to the semi final stage but its not about winning and the experience will do them the world of good,” added Michael.

“The Under 16 A Football team had a successful year getting to the West semi final however defeat to Clonoulty Rossmore derailed their prospects.”