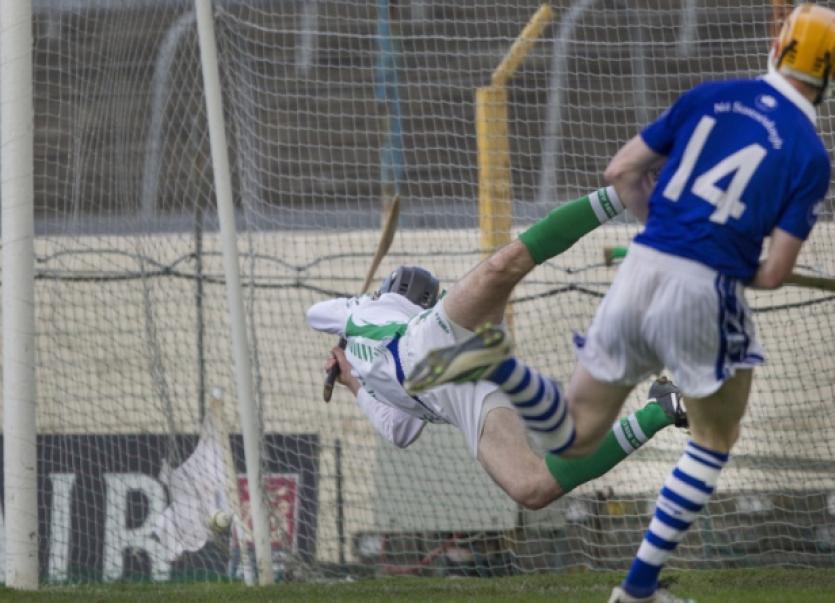 Controversy stemmed from the sending off of Drom’s county man, James Woodlock after 20 minutes.

The Drom man was penalised initially for a heavy tackle on Billy McCarthy, and then engaged again with the Sarsfields man who was on the ground. Referee Johnny Ryan brandished the red card leaving Drom-Inch, who were leading at the time 0-8 to 1-3, and comfortably in control of affairs, with a very difficult task ahead of them.

To their credit Drom continued to hold the initiative for the next 30 minutes and were four points clear with ten minutes to play, but then came the drama as Sarsfields’ third goal by Richie Ruth in the 50th minute kickstarted a late surge by The Blues which yielded six points, sweeping them to victory and a place in the last eight of the championship. Drom’s injury time goal by Robbie Long came too late to make a real difference.

What would have happened had Drom-Inch had their full quota of players for the sixty minutes is anybody’s guess. Certainly they will argue with justification that they had enjoyed the better of things for 50 minutes but the extra ground to be covered on the spacious Thurles pitch took its toll at the finish, and brought a campaign that held out much promise to a disappointing halt.

Sarsfields didn’t reach their real potential until late on when their flowing hurling began to find gaps in a tiring Drom defence. The Thurles lads probably suffered for want of a really competitive game, having recorded easy wins in all their group games, and the expectation is that this encounter will do much to whip them into real championship mode.

Having handsomely defeated Sarsfields in the Mid semi-final, Drom’s intent was obvious from the start as they whipped over three points to Sarsfields’ one in a blistering opening three minutes. Drom’s movement was excellent and their accuracy with the chances that came their way was impeccable as they pushed 0-5 to 0-2 clear after eleven minutes. Thomas Nolan, David Collins (2) and Seamie Callanan (2, one free) accounted for Drom’s tally, with Pa Bourke and Lar Corbett registering for Sarsfields.

Drom had Jamie Moloney tagging Lar Corbett with Mickey Cahill of Sarsfields assigned the task of policing Drom dangerman Callanan. Then came a typical piece of Corbett magic as he swooped on a breaking ball to race through for a quality goal to bring Sarsfields level.

Drom’s response typified their determination, David Butler, David Collins and Johnny Ryan pointing to retain the initiative for their team. Another Lar Corbett point indicated that the county man was on his game, his scores crucial to keeping the Thurles lads in touch.

Despite Woodlock’s dismissal, Drom showed no sign of wilting in the face of adversity as Johnny Ryan and a brace of Seamie Callanan points from frees put them four clear by the 25th minute. Lar Corbett again responded for Sarsfields but with the interval approaching Seamie Callanan (two frees) and Johnny Ryan points, to replies from Denis Maher and Conor Lanigan, had Drom 0-14 to 1-7 to the good.

Drom had an early second half point from Seamus Butler and were five points ahead by the 41st minute when Larry Corbett was fed by Denis Maher for Sarsfields’ second goal and Padraic Maher sent over a great long-range point almost immediately. Drom’s response was a great point by Michael Campion followed by another Seamie Callanan free for a three-points lead.

Sarsfields found it very difficult to break down the Drom resistance until Richie Ruth, who had come on as a sub and was very effective, took a pass from Pa Bourke in the 50th minute for a levelling goal. Two minutes later Michael O’ Brien whipped over the lead point for Sars and this was followed by Stephen Cahill, Pa Bourke, Lar Corbett and Aidan McCormack (2) points as Sars went six clear going into extra time. Drom’s Robbie Long found the net in the 62nd minute but the puck-out was followed by the final whistle.

Sarsfields deserve full marks for sticking to their guns when things were not moving favourably for them. They owed a huge debt to Lar Corbett who was at his opportunistic best, and whose 2-5 was central to their win. Padraic Maher was a tower of strength in defence. Michael Cahill did a fine job of policing Drom dangerman Seamie Callanan while Stephen Maher, Stephen Cahill, Denis Maher, sub Richie Ruth and goalie Patrick McCormack were others to catch the eye.