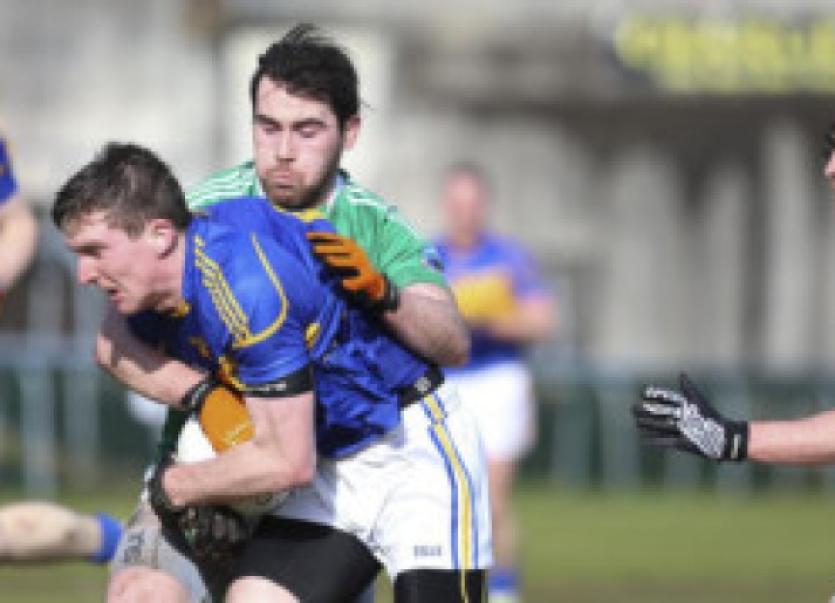 Tipperary’s second trip north of the border in this year’s campaign ended in failure again with a 2-9 to 0-11 defeat to Fermanagh in Enniskillen.

Tipperary’s second trip north of the border in this year’s campaign ended in failure again with a 2-9 to 0-11 defeat to Fermanagh in Enniskillen.

The sides were level at the interval but the home side upped the tempo in the second half to send Tipp home pointless.

Tipp went into an early three point lead but Fermanagh never hit the panic button and played themselves back into the game and finished the stronger of the sides, outscoring the visitors by 1-2 to 0-1 in the last ten minutes.

Tipperary weren’t long about applying the height and physical heft they brought to this encounter, Stephen O’Brien pointing after 28 seconds and Conor Sweeney adding a close range free a minute later.

Sean Quigley opened Fermanagh’s account from a free but Tipperary extended their lead after a malfunction in the Fermanagh kickout saw Colin O’Riordan win possession and switch the play to Barry Grogan who swung over before George Hannigan put three in it with a close range point.

Marty O’Brien had Fermanagh’s second score before a Quigley free cut the deficit to the minimum.

Evan Comerford answered that with a 45, before Fermanagh showed their first signs of coming to grips with the Premier challenge.

There were 23 minutes gone when a ball over the top from Declan McCusker found the Tipp defence with their pants down and had them desperately scrambling back. Sean Quigley gratefully accepted the ball and picked his spot before driving low and hard to the net to edge Fermanagh into the lead for the first time in the game.

After that it was tit for tat until the interval, a Sean Quigley free sandwiched in between points for Philip Austin and Michael Quinlivan. All square at the break at 1-4 to 0-7.

Ryan Jones launched over an inspirational point for Fermanagh for the second half’s first score.

Conor Sweeney levelled it again from a free. Then Barry Mulrone was to the fore again, sending a direct ball in to Tomás Corrigan who popped over a lovely point from 30 metres.

However Tipp got their noses in front with 20 minutes left with two frees from the boot of Conor Sweeney.

Again Barry Mulrone set the standard, winning the kick out and playing his part in the move again before teeing Ryan Jones up for another fine point.

With the game level at 1-7 to 0-10 Fermanagh upped it a gear. The warning signs were there for Tipp in the 52nd minute when Sean Quigley won the ball, but couldn’t shake off his man. Mooney gave a free out for travelling, but Quigley was being impeded and in addition Damian Kelly was loitering with intent and if Quigley could have laid off to him the goal was on. Then four minutes later Quigley put the paw to a long ball in, but his flick failed to beat the alert Evan Comerford.

Then in the last ten minutes Fermanagh drew blood. First Sean Quigley put them into the lead with a free from an incident which saw Paddy Codd black carded.

Sean Flynn levelled the game straight away, but the coup de grace was coming. Richard O’Callaghan, a colossus in the centre all day, made a marvellous fetch from Thomas Treacy’s kick and the ball was delivered into Quigley, this time there was nothing to hold the Roslea marksman back, and he drew Comerford before flicking off to Paul McCusker who had the simple task of palming home.

With six minutes left on the clock there was Barry Mulrone putting the body on the line again to win the free and again Sean Quigley made Tipp pay to the full.

As time ebbed away the Premier men went chasing the goal and with a minute left it looked like they might just get it. Daragh Dwyer went to pull the trigger from a threatening position only for Barry Mulrone to appear out of nowhere and smother the ball on his boot.

Tipp’s best operator on the kick out was also their best player on the day, Peter Acheson. He won four kicks, two on Thomas Treacy’s kick. While the Moyle Rovers man was an astute distributor of possession, Tipp just couldn’t get him on the ball enough to get the most from him.