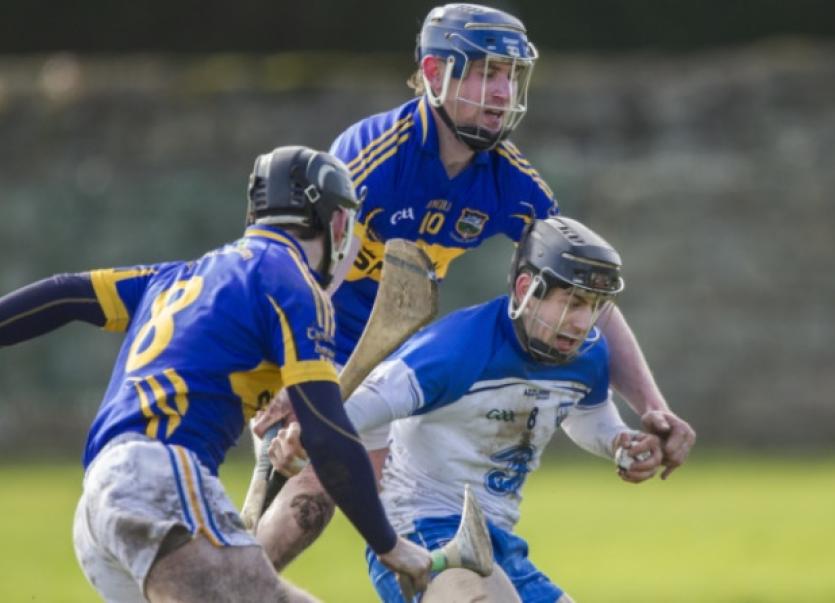 Tipperary and Waterford played out an entertaining draw at Clonmel Sportsfield on Sunday to keep both teams ticking over for more important national hurling league challenges coming up.

Tipperary and Waterford played out an entertaining draw at Clonmel Sportsfield on Sunday to keep both teams ticking over for more important national hurling league challenges coming up.

The contest served a dual purpose, filled in a blank weekend for two teams keen to maintain form for the league and raised funds for the refurbishment of the GAA centre in Clonmel, but as expected, with both teams fielding experimental line-ups it was absent of that competitive intensity to make it a more absorbing occasion.

Unfortunately for the South Board the biting cold and inclement weather conditions kept many people away from the Sportsfield.

Even though only pride was at stake between these two neighbouring hurling rivals, the game did serve up some fine individual displays and excellent scores in a game in which Tipperary never allowed their opponents to take the lead.

A late scoring spree from substitute Maurice Shanahan, who scored three points, one of them a sublime execution thirty yards out under pressure from two Tipperary defenders close to the sideline, in the closing minutes to earn a draw for Waterford.

With the sides level at 1.13 to 0-16, referee Fergal Horgan blew up a few minutes early allowing the patrons who braved the weather ample opportunity to make it home in time to view the rugby on television.

A draw was a fair result on the day which saw Kilsheelan man Bill Maher lay down a marker with an excellent display performing at half forward and at midfield in the second half scoring three excellent points from distance to cap a very strong performance.

Maher along with centre back John Meagher were the stand-out performers for Tipperary on the day. Meagher nullified the threat of Michael Brick Walsh at centre forward putting in a commanding display, surging forward whenever he could to cause problems for the Waterford defence.

On one of those runs Meagher forced one of many spectacular saves from Waterford goalie Ian O’Regan with a powerful strike after striding past a number of defenders. The Loughmore/Castleiney man was denied on that occasion and he had to be taken off late in the second half when he sustained an injury forcing an early reshuffle among the Tipp ranks.

It was an even enough first half with Tipp shading it by nine points to six. Jamie Barron in midfield was the outstanding Waterford player. He registered three points in that first half and his workmanlike performance kept Waterford in the game as he picked off scores and was the main instigator of providing a supply to the Waterford forwards on the day.

Noel McGrath was Tipperary’s most influential player in that period, scoring two points from play and three from frees. McGrath was the main threat as Tipperary maintained the upper hand in the opening half and they were well worth their three point lead at the break.

Waterford gradually forced their way back into the game in the second half with points from three substitutes, Brian O’Halloran, Mark O’Brien and Colin Dunford, without reply from Tipperary midway through the second half bringing Waterford back to level terms at twelve points apiece.

Tipperary did not take long to restore their lead with Waterford only enjoying parity for a two minute period before David Butler released Sean Maher with an excellent pass before the Clonoulty/Rossmore man struck low and hard into the corner of the net to put some daylight between the teams again.

Waterford recovered, however, and minutes after coming on for Kevin Moran, Maurice Shanahan made an immediate impact firing over three points to bring Waterford back to level terms for the second time in the match .