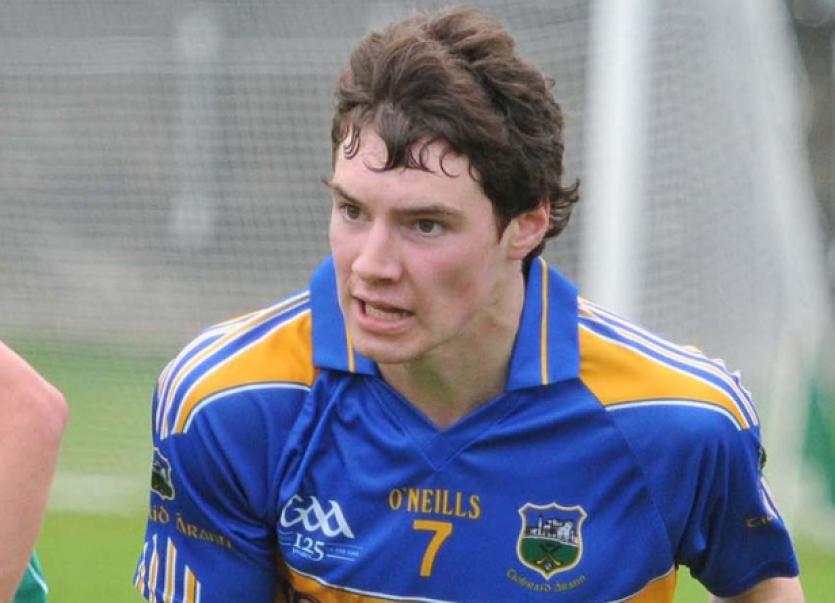 This was a repeat of last year’s county championship quarter-final which the West Tipp side won, but this time round the Powerstown/Lisronagh outfit proved stronger in the end.

Aherlow Gaels with Cathal Dillon and Barry Grogan operating at midfield had the better of the opening exchanges and led by 0-3 to no score after seven minutes, all three points from Barry Grogan frees.

Rovers eventually found their feet and were all square at 0-4 apiece 20 minutes in, compliments of all four points from corner-forward Liam Boland, two from frees and two from play. In what was a free-ridden game, Aherlow’s only score from play in the opening third of the game was an excellent point from Seamus Grogan operating at full-forward,

The West Tipp side pulled away again in the closing minutes of the first half.  After Mark Russell was fouled Barry Grogan tapped over the free and followed up with another point from play after a short free was returned to himself and pointed. Liam Boland scored an excellent point from a difficult angle to close the gap to one.

The Gaels got a big boost before the break. Moyle Rovers corner-back David Conway misjudged the flight of the ball and Bernard O’Brien soloed through unhindered from 25 metres out on the wing to blast to the net. This final score of the first half sent Aherlow in leading by 1-6 to 0-5.

County senior Brian Mulvihill, caught up in traffic coming from Dublin, was introduced at half-time for Rovers but it was their county minor hurling captain, Stephen Quirke, who came to the fore in the early minutes after the resumption. The young midfielder sent over a great point with his left inside half a minute and followed up with two frees all within the first five minutes of the half.

Rovers’ decisive score came 11 minutes in and again Stephen Quirke was involved. His long ball played in to the goal area found Liam Boland one-on-one with his marker and Boland won the aerial tussle and finished superbly to put Rovers 1-8 to 1-6 ahead.

Aherlow hauled themselves back into the game with two quick points midway through the half. Firstly Thomas Hanley cut through the middle to score a fine point and then after Rovers messed up a kick-out, Barry Grogan equalised with the free he had won himself.

But that was as good as it got for Aherlow and Moyle Rovers finished the stronger in the last quarter with six points to two in reply.

With some excellent defending by county players Alan Campbell and Darragh O’Dwyer, the South Tipp side kicked on.

Substitute Paudie Foley, on the field only a minute, kicked a great point for the lead quickly followed by a another free from the on-song Liam Boland.

The strength of the Rovers bench was obvious in the dying minutes. Paudie Foley forced a free which Stephen Quirke converted before another second half substitute Jack Lonergan kicked a long range point to put Rovers three clear. Lonergan’s playing time was brief though, being forced off with an injury minutes after his introduction.

Three minutes from time Paudie Foley had his second point, another fine effort from a tight angle. The last score of the game went to Brian Mulvihill who finished off a free-flowing move as the game petered out as a contest.

All that a tiring Aherlow Gaels could muster in the last 10 minutes were two frees from Barry Grogan, one in particular exquisite, from just in from the sideline and 25 metres out.

In a game which was a long way short of championship intensity it never really managed to getflowing with way too many frees over the hour disrupting the spectacle.

Rovers will be happy with the opening win in this five-team group (Ardfinnan, Ballyporeen and Drom/Inch). Alan Campbell and Darragh Dwyer led the defence well, Peter Acheson and Stephen Quirke got to grips with the midfield after a slow start while the likes of Danny Owens up and down the wings, Liam Boland and Paudie Foley can be well pleased with their displays.

For Aherlow Ciarán McDonald, on his way back to full fitness, and Laurence Coskeran stood out in defence; Cathal Dillon got through a lot around the middle while Bernard O’Brien when he got his chance of goal took it very well. But overall they were way too much dependent on  Barry Grogan who kicked eight points on the night, seven from placed balls.