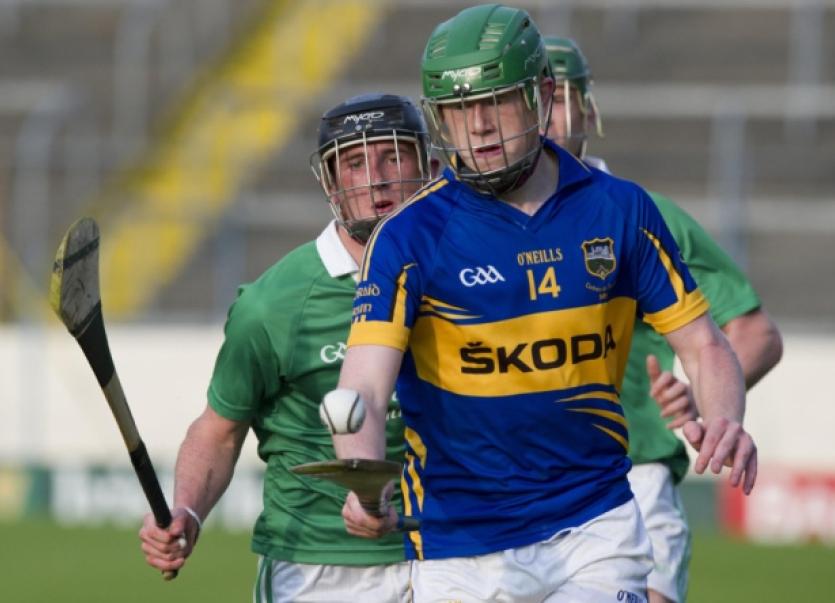 Tipperary handed back both their provincial and All-Ireland Minor Hurling crowns on Wednesday evening of last week when they were beaten by Limerick in an exciting Munster Championship semi-final at Semple Stadium.

Tipperary handed back both their provincial and All-Ireland Minor Hurling crowns on Wednesday evening of last week when they were beaten by Limerick in an exciting Munster Championship semi-final at Semple Stadium.

Tipp led for 38 minutes of this stirring encounter but were overtaken by a powerful surge that propelled Limerick into the Munster Final on July 14, where they’ll meet Waterford.

These are good times for Limerick hurling. Hot on the heels of the Seniors’ defeat of Tipp, their Minors completed the semi-final double to ensure that they’ll be represented in both games on Munster Final day.

Just like their Seniors, the Tipp U-18s failed to hold onto a 4-point lead, an advantage that they held four times. A point from Josh Keane, created by Sean Ryan’s incisive pass, ensured that they were ahead by 0-14 to 0-10 four minutes into the second half but their challenge faltered spectacularly after that, as they scored just 3 more points in the remaining 26 minutes.

They were made to pay for wasted opportunities - they had 8 second half wides, and 4 in the first half - and suffered for failing to take a more direct approach when they overplayed the ball. As a consequence Limerick gradually took control, striking 6 unanswered points to put them two clear (0-16 to 0-14) with 12 minutes remaining.

Josh Keane converted a free to reduce the deficit to one with 9 minutes remaining for Tipp’s first score in 17 minutes. However with Ronan Lynch, David Dempsey and Jamie Butler playing out of their skins the momentum was firmly in Limerick’s favour.

The game’s crucial score came with 7 minutes of normal time remaining when Ronan Lynch blasted a penalty to the net, although there was a slight doubt whether substitute Thomas Morrissey had been fouled or was barging.

Substitute Donnacha Quinn replied with a Tipperary point but they never really came close to scoring the goal needed to rescue them. Josh Keane hit a rising shot over the bar to leave just 2 points in it, but Ronan Lynch crowned Limerick’s merited victory with an additional time free.

In an always open and entertaining encounter, witnessed by an attendance of 3,314, the signs had been encouraging for Tipp before the scores dried up and they ran out of steam in the second half. They were marginally the better side in the first half and were worthy of their 0-12 to 0-10 interval lead. Limerick stuck close to them, though, and had they converted a slice of their first half chances (they had 6 wides in that first period and 9 overall) the scoreline at the break could have been different.

In a sprightly Tipp attack Colin O’Riordan led the way, with Sean Ryan (whose fielding was a highlight) and Josh Keane playing solid supporting roles. Even during that difficult second half, centre back Ronan Maher was Tipp’s best player while Barry Heffernan also impressed in defence.

With Willie Connors and Tom Kirwan starting brightly in midfield, they made the early running and were ahead by four three times in the opening half. Goalkeeper Brian Hogan, son of U-21 hurling manager Ken Hogan, made a smart save from Patrick Ryan in the 11th minute and when Tipp broke from the rebound Sam Conlon put them ahead by 0-6 to 0-2. It was 0-7 to 0-3 two minutes later after Colin O’Riordan and Ronan Lynch (from a free) exchanged points. Limerick worked hard to equalise by the 26th minute, and although Tipp were ahead at the interval there was much more to come from Limerick. Tipperary - Brian Hogan (Lorrha/Dorrha), Ross Mulcahy (Moyle Rovers), Jason Ryan (Toomevara), Darragh Peters (Kilruane MacDonaghs), Tom Fox (Eire Og Annacarty, captain, 0-1), Ronan Maher (Thurles Sarsfields), Barry Heffernan (Nenagh Eire Og), Willie Connors (Kildangan 0-1), Tom Kirwan (Ballybacon/Grange), Conor Lanigan (Thurles Sarsfields 0-1), Colin O’Riordan (JK Brackens 0-4), Sam Conlon (Roscrea 0-1), Mark McCarthy (Toomevara 0-1), Josh Keane (Golden/Kilfeacle 0-7 including 4 frees) and Sean Ryan (Sean Treacys).