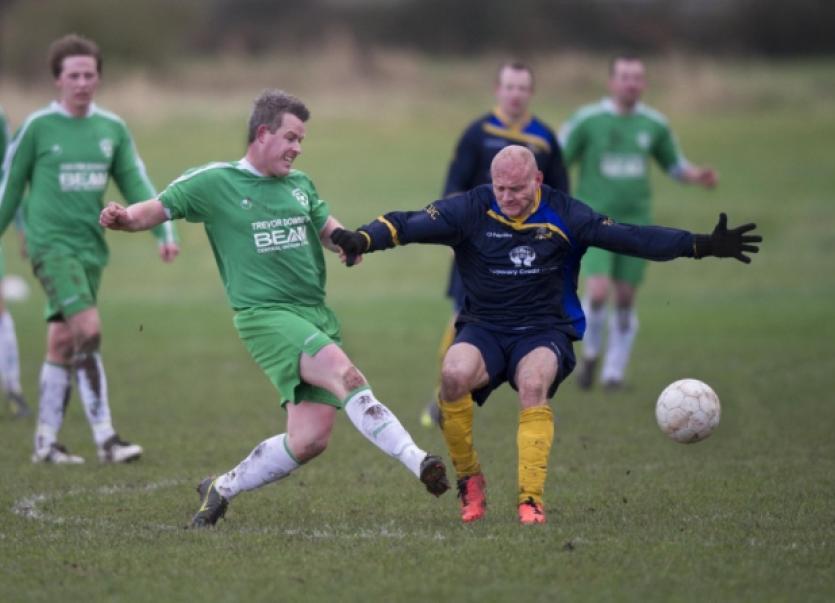 In very testing conditions the home side started on the offensive and both David Joyce and Sean O’Hara came close before Celtic took the lead after 10 minutes, when Darren Burns’ pass found David Joyce in space and he shot low under the Cashel keeper to put Celtic in front.

The visitors battled back from this early set back and went toe to toe with Celtic though never really troubling Brian Sweeney in the Celtic goal.

As the first half wore on Celtic began to get on top again and put together some nice moves that cut open the Cashel defence on a number of occasions. From one such move Kevin Waters played in Paul Kennedy and although he smartly beat the Cashel his effort clipped the bar. Within a minute Kennedy came close again, this time denied by the Cashel keeper after he was set up by strike partner Seanie O’Hara.

The second goal Celtic were threatening finally arrived four minutes from the break when Seanie O’Hara expertly controlled Burns cross and fired. Right on the stroke of half time Seanie O’Hara brought his season’s goal tally into double figures when he was again on the end of an excellent Darren Burns cross to put Celtic 3-0 at the break.

Early in the second period the players then to seek the shelter of the dressing rooms from a heavy hail shower but there was no respite for Cashel when play eventually resumed.

Andy Cosgrave’s cross had the Cashel keeper in trouble forcing him to claw the ball away before Seanie O’Hara blasted against the bar.

Twelve minutes from time Celtic got a fourth when great combination play between Dwayne Burns and Brian Waters set up David Joyce for his second of the game.

It looked as if Cashel had the final say in the game when Eddie Walsh pulled a goal back for the visitors on 84 minutes but with just two minutes left Graham Doyle smashed home a penalty after David Joyce was tripped in the box to complete a comfortable win for Celtic.

This win puts them level with Clonmel Town just behind league leaders St Michael’s, and again sets up a magnificent run in to the title, a title that Celtic will not give up without a fight.