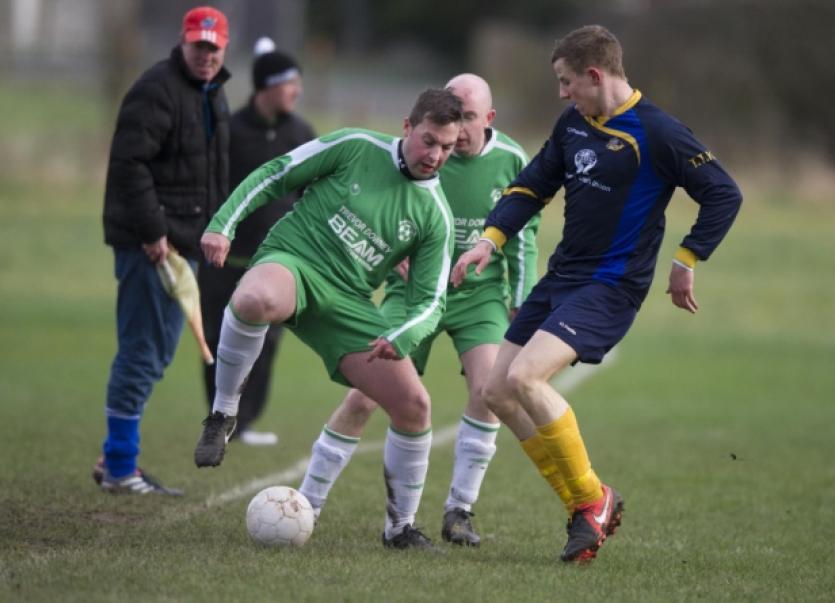 The biggest game of the weekend in Tipperary survived the elements as a result of trojan work by the committee and staff at St Michael’s.

The biggest game of the weekend in Tipperary survived the elements as a result of trojan work by the committee and staff at St Michael’s.

In repayment their team rewarded them on Sunday afternoon with a very thorough performance to move into the last sixteen of Ireland Premier Junior Cup competition.

After making the long trip for nothing a few weeks ago, the home team were in the mood to punish their guests and almost opened the scoring in the third minute, when Richie Ryan almost profited from good work by both Aaron Wall and Thomas Fahey.

Irish international Jimmy Carr was next to threathen for the home team just after the quarter hour, firing just over as Michael’s began to turn the screw.

And on and on it went in a similar vein with chances from Pa Quinn, David Slattery and Paul Breen going a begging, without any real hint of resistance from the Roscommon boys. Alas, for all their pressure, Saints were unable to breach the dogged defence and went to the break all square.

The second period followed the same pattern as the first, and within two minutes it was David Slattery, again put through on goal by Jimmy Carr who was to be denied.

Finally, a minute later, the visitors had their first real shot in anger, when Steve Ryan came close to scoring, but was rebuffed by the home defence.

This was the warning the Tipperary side needed and they finally opened the scoring just after fifty minutes when Paul Breen came forward and powered a free kick by Russell Quirke home with his head, leaving the Roscommon keeper rooted to the spot.

This settled the Tipperary Town, and six minutes later, they doubled the lead. Again Quirke was the provider, as a cross was bundled home from close in by David Slattery giving the home side some breathing space, and ensuring the Ballaghadereen now had to come out of their shells in attack, if they wanted anything from this tie.

The crowd also now raised the noise level, as they smelled blood and 20 minutes from time, their side ended the game as a contest when Darren Lynch was first to a rebound, to poke home and put Saints three up.

After that, it was merely a case of running down the clock, which the home side did expertly, comfortable in the knowledge that their famous name will be in the draw for the last 16 of this competition.

St. Michael’s will take it one step at a time with their ambitions to emulate the heroes of 197????.