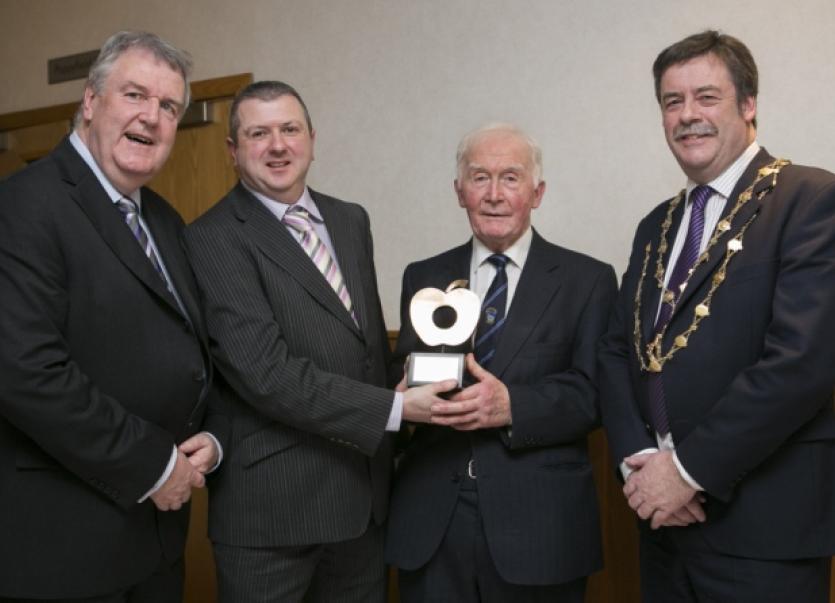 A colossus at the heart of the defence during one of the glory eras for Tipperary hurling was the stand-out recipient at the Annerville Awards on Saturday night.

A colossus at the heart of the defence during one of the glory eras for Tipperary hurling was the stand-out recipient at the Annerville Awards on Saturday night.

Tony Wall won five All Ireland titles with Tipp and eleven county titles with Thurles Sarsfields and that remarkable achievement was honoured with the Knocknagow Award at the United Sports Panel ceremony in the Clonmel Park Hotel.

The attendance rose as one to give a standing ovation, to the strains of ‘Slievenamon’, to one of the all-time greats of Tipperary hurling whose career highlight was captaining Tipp to the All Ireland title in 1958.

Seventeen awards were presented on the night, reflecting the range and diversity of sport in County Tipperary.

They ranged from hockey to hurling, kickboxing to cycling, and in age from sixteen to eighty.

The winners received their coveted statuettes from Eoin O’Gorman representing Bulmers, who said how delighted the company was to be associated with such a prestigious event.

Mayor of Clonmel Pat English also congratulated the winners on their outstanding achievements which once again set Tipperary apart as the premier county for sport of all codes.

In addition to the specific sports awards, there were also two special presentations – in Lifetime Achievement and Special Achievement.

Lifetime Achievement went to Chris Regan who has spent an actual lifetime coaching youngsters at Clonmel Town soccer club. Since 1974 he has been coaching schoolboys and many of the county’s top stars identify Chris as a huge influence on their career.

The Special Achievement award went to a very special young Clonmel man, Andrew Duncan, who after receiving a kidney from his father Malcolm in 2012, traveled to the Transplant Games in South Africa last year where he won two gold, one silver and one bronze medals.

The other winners were -

Sean Tobin in Athletics who had a remarkable season for Clonmel High School, Clonmel AC, Tipperary and Ireland;

Dean Gardiner in Boxing – the Clonmel super heavyweight won the national intermediate title as well as silver and bronze medals for Ireland;

Liam McGrath in Gaelic Football – the Loughmore-Castleiney player, after captaining Tipperary to the All Ireland minor title in 2011, was a leading light in his club adding the county football title to the hurling crown won weeks earlier;

Fergal Collins in Handball – the Ballina player won an All Ireland double, in the 40x20 with fellow clubman Ger Coonan and in the 60x30 with another clubmate David Hickey;

Edel Hyland in Hockey – the Castleiney girl was on the Munster u-18 team in the inter-provincials, has been invited to train with the Irish senior team and is taking up a scholarship to the University of Virginia in the US;

Noel McGrath in Hurling – the Loughmore-Castleiney player, a cousin of football winner Liam, was the star performer in the club’s county senior final win over Nenagh, the first leg of the club’s historic hurling/football double;

Tipperary Ladies Senior team in Pitch and Putt – the Tipp team won the national title on home turf at Hillview for the first time in 23 years;

Aisling Hickey in Racquetball – the UCC student from Rossmore completed three in a row of Irish senior singles titles as well as winning a European singles title and a team gold with Ireland;

Alex Chadfield and Ryan McKenna in Rowing – the Clonmel Rowing Club pair won gold for Ireland in the Home Internationals at Nottingham in the Men’s Junior Pairs;

Tom McMahon and Dan Quinlan in Shooting - the Clonmel men won gold in separate events at the World Police and Fire Games in Belfast, Tom in clay shooting and Dan in the rifle category;

St Michael’s FC in Soccer – three members of the Tipp town Saints team, James Walsh, Paul Breen and Christopher Higgins, were on the Irish Amateur team that won the international quadrangular event in Limerick, beating Scotland, Isle of Man and Northern Ireland without conceding a goal;

Loughmore-Castleiney selectors in the Sean Lyons Sports Executive – the same selection team of Declan Laffan, Seamus Bohan and Pat McGrath guided the club to the historic hurling and football double, the first Tipp club to achieve the distinction.