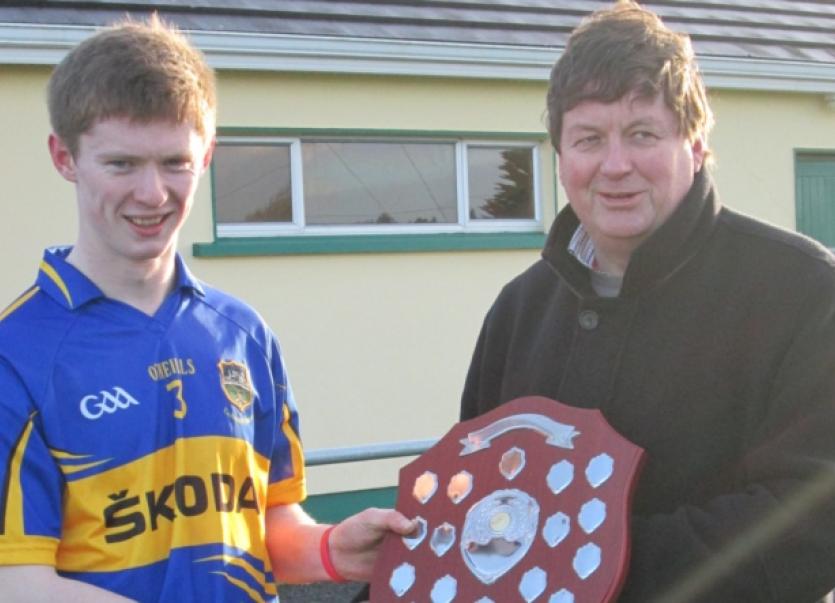 The first silverware of 2014 to arrive in the county came courtesy of the U21 footballers who last Saturday afternoon put up an impressive performance to see off Mayo with a well deserved two point win in the inaugural Hastings Shield Final.

The first silverware of 2014 to arrive in the county came courtesy of the U21 footballers who last Saturday afternoon put up an impressive performance to see off Mayo with a well deserved two point win in the inaugural Hastings Shield Final.

The Tipp selectors had to re gig the original team selection for the game at Ardagh, Co. Longford before a ball was kicked due to the absences of a number of players with other GAA and work commitments, and with a panel of twenty players on duty a massive effort would be required by everyone to get over the line.

Showing a complete transformation from the previous week’s defeat at the hands of Meath, the intensity and commitment was back in abundance and with the midfield partnership of Stephen O’Brien and Colin Riordan enjoying a near monopoly of possession, the foundations for victory were well and truly laid.

Captain John Meagher opted to play with the strong wind and with an amount of early possession going unconverted, Stephen O’Brien eventually broke the deadlock to get the scoring underway with a pointed free after six minutes.

With the Tipp backs giving little away, Mayo’s Kevin Gibbons on one of the very rare occasions he got inside Conor O’Sullivan, raced in to give Gearoid Slattery no chance with their first goal and a two point lead with ten minutes gone.

However this would be the only occasion where Mayo would lead and it was short lived as straight from the kick out the ball found Colin O’Riordan who worked his way past the Mayo defence to put Tipp back in front with a cracking goal.

Mayo came storming back with three unanswered points to leave it 1-7 to 1-3 at the break with full forward Anthony Jordan who was well marshalled up to then by John Meagher landing two points while centre forward Adam Gallagher was also on target pointing from a close in free.

Mayo’s Diarmuid O’Connor and Liam Casey exchanged points before Mayo added two points to narrow the gap to three, 1-9 to 1-6, with fifteen minutes remaining. Mayo continued to ask questions of the Tipp backs but Kevin Fahey, Niall and Conor O’Sullivan along with John Meagher all put their bodies on the line.

And showing a never say die attitude back came Mayo as they did in the closing stages of the first half grinding out several attacks with centre forward Adam Gallagher spearheading the revival with a goal and two pointed frees ensuring an anxious last couple of minutes for Tipp.

However Tipp survived the onslaught and when Stephen O’Brien landed a long range point to stem the tide, it steadied everyone’s nerves helping Tipp to a well deserved victory.

After the game Tipperarys Captain John Meagher (Loughmore/Castleiney) was presented with the Hastings Shield by a member of the Longford Co. Board.