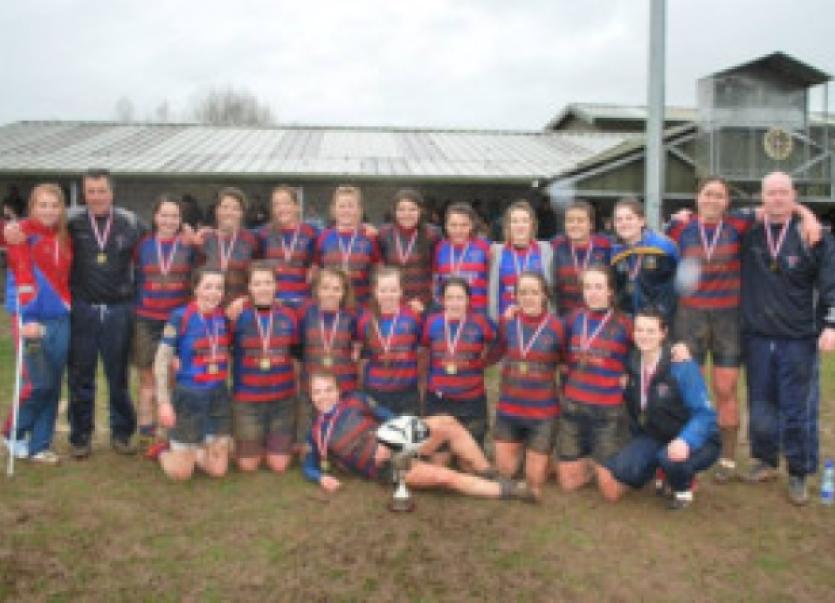 In atrocious conditions in Bruff, Carrick-on-Suir’s Under-18 girls rounded off a magnificent season when claiming the Munster League title following victory over Mallow.

In atrocious conditions in Bruff, Carrick-on-Suir’s Under-18 girls rounded off a magnificent season when claiming the Munster League title following victory over Mallow.

The team, which has literally blazed a blue and red trail from the season’s kick-off, demonstrated buckets of resolve and guile to emerge victorious on a day which left the team kit requiring an industrial washing machine to subsequently cleanse them!

This was a victory won with good old-fashioned Munster grunt, on a day when both packs gainfully stuck to their task on a day that might have even had Ploughing Match enthusiasts cowering!

Ten minutes shy of half-time, after a half-hour of rugby predominantly played between both 10-metre lines, Carrick took the lead after Chloe Blackmore crossed the heavily muddied whitewash.

She subsequently converted her own try to leave Carrick 7-0 ahead, and that’s how it remained at half-time.

The pattern established before the interval was largely replicated in a combative, energy-sapping second half, as both teams gainly gave their all, playing the game in a tremendous sporting spirit which reflected well on both sets of players and their coaches.

While Mallow eked out a try of their own in the 15th minute of the half, they crucially failed to add on the conversion.

Thereafter, Carrick largely dominated the territorial dimension of the game, and in the final 10 minutes found themselves camped inside the Mallow 22, but couldn’t find a way through a teak-tough Corkonian defence. But the hard work was well and truly done by then and Carrick ended the match 7-5 ahead, champions of Munster and deservedly so!

This victory provided captain Aoife Moore, along with Faye Drohan, Karen Ryan and Donna Maher with the perfect farewell from the underage grade, with senior rugby now beckoning.

And we wish all four well with their future careers, which we have no doubt will reap great rewards for each of this talented quartet.

Congratulations to the team on a magnificent, groundbreaking success.

Not only have they brought great honour to the club, they’ve also been fantastic ambassadors off-field and are a credit to their coaches, their parents but, most importantly of all, to themselves.