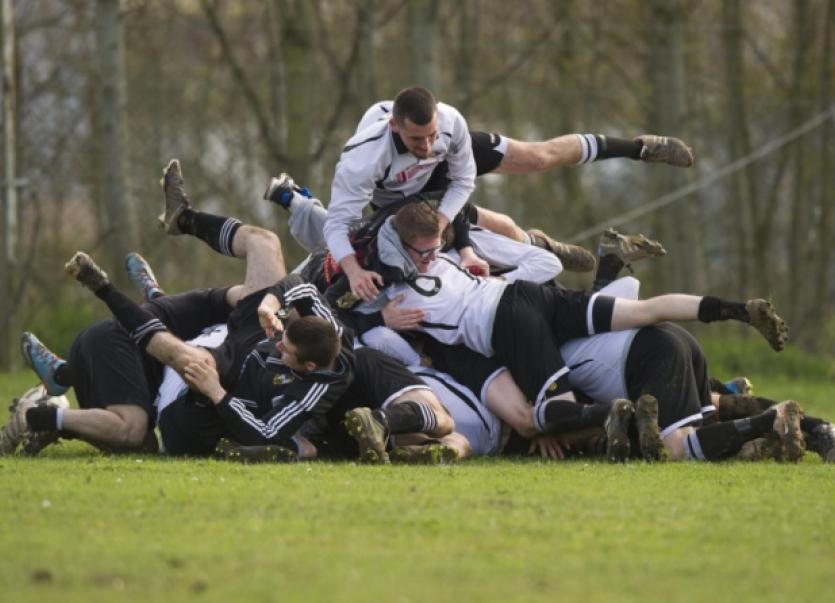 Underdogs Cashel Town continued their great cup record at Newhill Park, with victory over Slieveardagh, despite finishing with only nine men.

Underdogs Cashel Town continued their great cup record at Newhill Park, with victory over Slieveardagh, despite finishing with only nine men.

The Cashel team who had been relegated only last weekend, when suffering a bad defeat at the hands of Division 3 champions Vee Rovers, put all that behind them to clinch the cup which they duly dedicated to a long serving club officer, who passed away during the week.

The opening period of the game was as many of these affairs tend to be, a tight tense time where both teams probe for whatever weaknesses their opponents might have.

Cashel were slightly the better from the start, and were unlucky not to open the scoring through chances by Michael Mackey and Pakie Farrell. However, the United defence was being well marshalled by Derek Walsh and Johnny Prout, and whatever got past these two, was easily taken by David Cashin between the posts.

That wasn’t to say however that Slieveardagh didn’t make some chances of their own, and both Ian Ivors and Thomas Hanrahan were always a thorn in the Cashel defenders’ sides.

But despite the huffing and puffing of both teams, it was likely to be a little bit of class that was going to unlock the score sheet, and so it proved, when one of the youngest players on the field, full back Gary O’Dwyer opened the scoring with a beautifully curling free kick beyond the reach of the United keeper. This was no more than the Cashel lads deserved, after their endeavours and they took the one goal lead into the half time break.

Slieverardagh United however came at them with all guns blazing in the second half, and had a number of early chances, where they tested Thomas Gayson in the Cashel goal.

Things got even tougher for Cashel Town on the hour mark, when they were reduced to ten men, after Pakie Farrell was unluckily sent to the line for a foul on his opposing number in the middle of the field.

Taking advantage of the extra man, the Ballingarry team piled forward, but were repelled time after time by a Cashel defensive unit which was under the guidance of Poca Moloney, and the baby of the team Joe Hennessy. These guys became even more important five minutes from time when after an altercation in the middle of the field, Cashel were reduced again, this time with Shane Slattery seeing read, leaving Cashel Town to try to plug the holes with only nine men.

In doing so, Cashel Town made a significant substitution when Gerard O’Dwyer replaced Michael Mackey. This was underlined in the final minute, when the United keeper fired in a free kick from almost half way, and Gayson in the Cashel goal inexplicably allowed the greasy ball through his hands, only to look back and instead of seeing the ball nestling in the bottom corner, he saw O’Dwyer, who had just cleared the ball off the line and away to safety.

In this acceptance speech though, Cashel captain JP “Pizza” Peters dedicated the win not only to his team mates, but to former club chairman, Christy “Bubbles” Hewitt who passed away during the week, and would surely have been looking down and cheering on the Cashel Town boys during this heart stopping win.