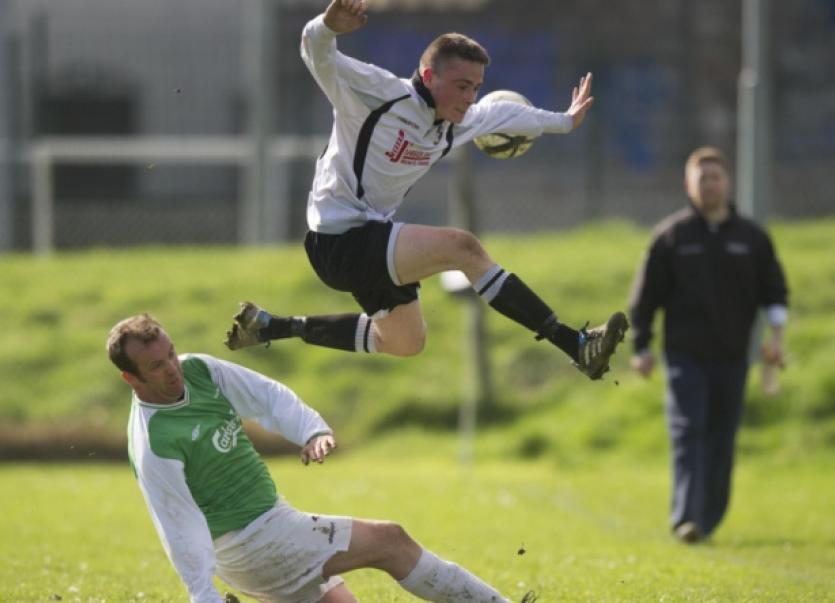 Scrapping for their First Division lives, right to the very end, Killenaule Rovers almost spoiled the Wilderness Rovers party as they made them fight every step of the way before the home side prevailed and went back to the Premier League after a year’s absence as champions.

The home side seemed to be relaxed too much and expecting to simply turn up and pick up the trophy, but Killenaule were sharp out of the blocks, and shocked the Wilderness when they took the lead just before 20 minutes. After some good work in the middle of the pitch, Andrew Hanly beat the offside trap with a neat curving run, and slotted coolly past the oncoming keeper.

Worse was to come for the home side, when despite being on the back foot for most of the rest of the half, Killenaule doubled their lead right on the stroke of half time, when they counter attacked and left the home team flat footed to watch Ger Ivors tap home from three yards at the back post.

Although the home team came out in the second half all guns blazing, they were continually denied by the visitor’s keeper, who made a number of excellent saves. That was until just after the hour mark, when Lee Cashman reacted quickest to a deflected shot and cut the deficit in half.

But even at that, the visitors continued to deny the Wilderness players, but were finally undone four minutes from the end when Brendan Dunphy hit a speculative effort from the edge of the area, and it deceived the unlucky keeper to level matters.

That might have seemed like a fair result given the efforts of both teams, but the Wilderness were not to be denied their day in the sun, and deep into injury time, Davy Grace got a goal that would grace any game. A 20 yard rocket leaving the Killenaule keeper with no chance and secured all three points, a promotion, and silverware for a team which has been on top form all season, and will no doubt as in the past, prove a handful for many of the teams awaiting them in the Premier League.

Rosegreen Rangers put a huge dent in Bansha Celtic’s promotion hopes when they completed their season in a sun drenched Nijinsky Park with a win on Sunday afternoon.

Both teams have had good and bad results all season, and the topsy turvy nature of the division continued with a sublime performance from the home team, and a stuttering performance from the fancied Celtic side. It was the visitor’s which started the better, and they opened the scoring after fifteen minutes when Tony Egan beat two defenders and shot past the advancing keeper. This should have been enough to settle the Celtic nerves, but Rosegreen continued to be a thorn in their sides all afternoon, and got an equaliser eight minutes before the break when Eoin Byrnes fired home.

Level at the break, both sides settled into a comfortable holding pattern in the second half, and the game looked like petering out into a draw until Byrnes again caught the Bansha keeper out with a rocket from outside the box into the top corner with only five minutes left on the referees watch. Stung by this, Bansha went desperately in search of an equaliser, but in doing so, left gaps at the back, which were exploited, and they were caught in injury time when Byrnes latched onto a long clearance and rounded the keeper to fire home and finish his clubs season on a high, celebrating another three points.

For Bansha however, it’s a case of three points lost, as they now begin to burn up the games they had in hand a few weeks back without making huge ground on the teams above them and in contention for that second promotion spot.