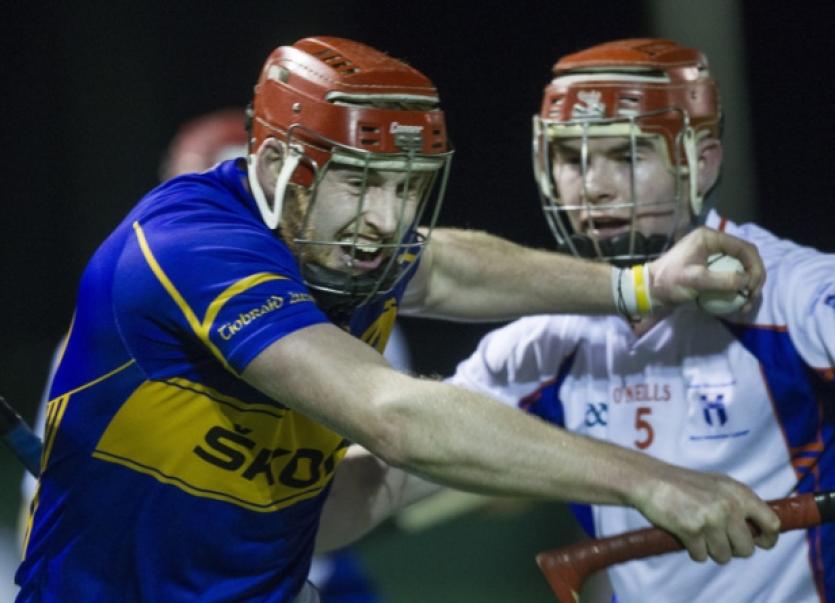 Hurler of the Year contender last year Seamus Callanan brought that form into the new season when he hit three goals in two remarkable minutes to push Tipperary to victory over Mary Immaculate College in the Waterford Crystal Trophy at Dr Morris Park on Friday night.

Hurler of the Year contender last year Seamus Callanan brought that form into the new season when he hit three goals in two remarkable minutes to push Tipperary to victory over Mary Immaculate College in the Waterford Crystal Trophy at Dr Morris Park on Friday night.

Callanan’s hat-trick between the 60th and 62nd minutes was the difference between the sides on a night when swirling winds made hurling difficult.

It was Tipp’s first competitive outing since the All Ireland final replay and followed their return from a team holiday in Dubai.

And even though manager Eamon O’Shea confirmed that they had trained in the sun, they still looked rusty at times and struggled to pull away from the students before Callanan’s goal blitz.

O’Shea didn’t overplay Friday night’s win, comparing such early season encounters as no more than training matches, but was happy to start 2015 with a win that puts them through to meet Clare at Sixmilebridge this Sunday.

Meanwhile the Eamon Cregan-managed Mary I side had Tipp players in Andrew Ryan, Seamus Kennedy, Tadgh Gallagher and Niall O’Meara who scored a cracking goal in a display that won’t have gone unnoticed by O’Shea.

O’Shea’s newcomers included David Butler who put in an impressive display and Sean Maher who showed great opportunism to finish to the net early in the second half.

The sides were tied seven times in the first half before a late Tadgh Gallagher point gave the students a 0-11 to 0-10 interval advantage.

It was tit for tat for the first twenty minutes after which the sides were level at 0-6 each with Tipp points from Callanan (3, two frees), David Butler (2) and a Kieran Bergin free with Limerick’s David Reidy hitting three for the students, two from frees and one point each from Niall O’Meara, a Darragh O’Donovan sideline cut and a smart point from Gallagher.

Tipp then hit their first purple patch of the game with three in a row from Paudie Maher, David Butler after great work from Bergin, and Callanan, who worked hard for his score.

But after Reidy from a free and Denis Maher exchanged points, the students finished the half stronger with four in a row from Reidy (2, one a free), Conor Sheahan and Gallagher for a single point half time lead.

However it didn’ last long with Tipperary regaining the lead within twenty seconds of the restart when Sean Maher scored a goal after good work from Callanan.

And that lead didn’t last long either with the students sweeping play to the other end and when the ball broke in front of Niall O’Meara, he volleyed to the net past Darragh Egan for a stunning goal.

Tipp levelled at 1-11 each through Sean Maher but they struggled to make an impact and it was the Limerick students who played the better hurling for much of the third quarter. It was still level at 1-14 each nineteen minutes into the half with Callanan and Reidy exchanging three points each, all six from placed balls.

But Mary I’s cause wasn’t helped by some sloppy shooting and they hit five poor wides – although the swirling wind made shooting difficult – at a time when they could have tested Tipp’s resolve.

They were made to pay when Callanan took control of the game. He was helped by Cork keeper Mike Browne who instead of catching a ball, blocked it out and Callanan was alert to return it to the net. Within a minute the defence was cut open and Browne was exposed for Callanan to hit his second.

And within another minute he showed a sharp touch to flick the ball off the ground from a crowd of players to complete the hat-trick and make it 4-14 to 1-14.

O’Donovan and Reidy reduced the margin as the students fought back but Conor Kenney and David Butler cancelled those out with the final two scores.

It was hard to judge Tipperary on a typical January night, with wind and rain, under lights, and in their first outing of the season.

Callanan’s hat-trick was the highlight, and avoided any possible embarrassment against a student team.

David Butler and Sean Maher also impressed in a forward line on a night that didn’t lend itself to any fancy stickwork.

Kieran Bergin had a great game, outstanding in the first half with plenty of possession and excellent distribution, while Paudie Maher and Shane McGrath also put in solid performances on such a dirty night.

St Mary’s clubman Seamus Kennedy was handed the centre half back berth by Eamon Cregan and he put in a fine performance but of the Tipp players in action for the students, it was Niall O’Meara who caught