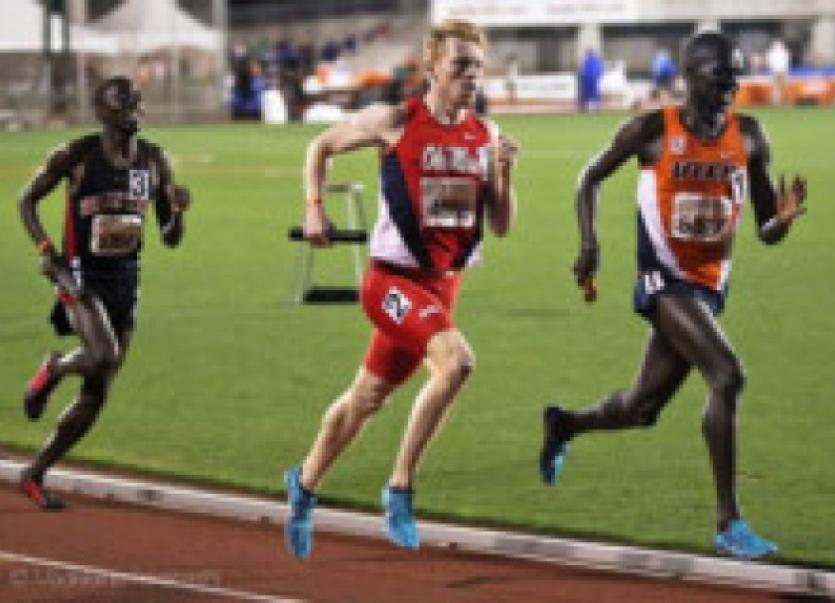 As we commence a new year of sport and look forward to great days ahead, few if any Irish sportstars will have had as exciting a past year as Clonmel athlete Sean Tobin.

As we commence a new year of sport and look forward to great days ahead, few if any Irish sportstars will have had as exciting a past year as Clonmel athlete Sean Tobin.

After a Christmas break at home, Sean is now back in Mississippi to commence his sophomore year at ‘Ole Miss’. While at home, Sean took time out to reflect on 2014 which proved an amazing experience for the Clonmel AC runner. At the same time the running prodigy is looking to the future and hoping that much more success is to come in the years ahead.

Recognised from his early teenage years as a special talent on the track and at cross-country, Sean was pursued by numerous American colleges to take up an athletics scholarship as far back as his Transition Year in Clonmel High School.

“I took two trips to the States. My first was in September 2012 when I visited ‘Ole Miss’ and I was seriously impressed with everything about the place, the coaching staff, the facilities, the university campus. I spent 48 hours there which was all the time that the rules allowed for, but it was an amazing experience.

“In February 2013 I went back to America and took in three further colleges over a period of a week - Florida State, Providence (Rhode Island) and Iona (New Rochelle, New York). But I kind of had my mind made up already, ‘Ole Miss’ was for me,” said the 20-year-old middle-distance and cross-country star.

There were many things that influenced Sean’s eventual decision including at the time an assistant coach at the University, Gavin Kennedy from Waterford, but it was mostly the facilities, miles and miles of trails (country dust tracks), good weather and the climate. Sean also stressed that it was the great tradition of the college and the pride of all involved in their system that helped to convince him.

“It’s a huge campus right in the college town of Oxford with approximately 20,000 students, but despite its size there is a great school spirit about the place.”.

An added advantage of the system at ‘Ole Miss’ is that Sean can hold off for two years before specificially identifying what course of education he wishes to concentrate on.

“Right now I am ‘Undeclared’ as you can use the first two years for general classesbut I think in time I will opt for something in the line of Sports Management or that field. In the future I would like to concentrate on coaching when I am finished,” added the well-focused rising star.

Sean described a typical day/week of college life for a top athletics undergraduate at the University.

“We would be up many mornings at 5 am for a run or whatever we might have to do that way. Classes most days would be from 9.30 am to 2.45 pm with a maximum of three classes per day. In between classes the athletes would use some of the food stations around the college. Depending on what day it is we would all head down to the track again around 3 o’clock, do a run at four, come back in and have core work and stuff after that. Later everyone would head out to get some food together.”

Sean is part of a group of 18 athletes, mostly American but also one from England and another from Australia, along with himself. “We’re like a family, we are really close and we all get along,” he added.

Sean hit the ground running, so to speak, when he landed in the Magnolia State last January. “I spent most of my first two weeks away from the college. The first week we were up in New York and the following week we were out in Seattle (Washington). It was in Seattle that Sean (then 19 years-old) broke the four minute mile barrier for the first time - running 3:59:91.

“I was the youngest ever Irish person to achieve it and the first in the school history (‘Ole Miss) to do it,” he proudly added.

Since then it seems Sean has been all over the United States of America covering 19 of the 50 states in Year 1.

“I’ve been to Texas, LA (Los Angeles California), Florida, Louisiana, Alabama, Indiana, Kentucky, Arkansas, and others, competing in all these states. I’ve been taking part in 800m and 1500m on the track and in cross-country,” said Sean, who among his notable achievements before heading Stateside was a 4th place finish in the European Juniors 1500m and a 9th place finish in the European Junior Cross-Country, both in 2013.

In his first year in ‘Ole Miss’ Sean has continued that steady progress.

At indoors he finished 2nd in the mile event at the South Eastern Conference (SEC)and anchored his team to win in the Distance Medley Relay.

At cross-country Sean finished 6th in the SEC, the highest finish in his school history; and 4th in the NCAA regionals where ‘The Rebels’ finished 1st team and qualified for the NCAA nationals for the very first time.

On general college life and Mississippi itself Sean had this to say.

“I love it. It’s a different world down there, the Southern culture is very different to other parts of America. It’s a different world coming from Ireland also. I really like the Southern culture, people there are great, so friendly, they welcome you in to their homes. I am very fortunate, one of my room mates’ family are always taking me in on breaks, occasions like Thanksgiving, stuff like that. They are always looking out for me and making sure I am ok.

“Luckily I am not someone who gets homesick. You are kept so busy that you don’t have too much time to think about it. But I keep in touch a lot with home all the same.”

But it hasn’t been all funrunning for Sean in his Fresher Year. Twice in the past year he has been hit with tonsilitis and a virus at vital stages of the athletics calendar and ultimately these setbacks stymied his ambitions in 2014.

Sean along with some of his college team spent a month of the summer training at high altitude in Flagstaff, Arizona, an experience he found tough but nonetheless very beneficial.

“After that we came back to campus and I felt in extremely good shape. Through Septeptember I felt great and I had never touched down in that place ever before and we were ready for something special. The week before we were to run in our first race since returning I came down with tonsilitis again and this time it was a lot worse and it knocked the body back a lot. The rest of my cross-country season was affected by that,” explained Sean

He got back to help his college qualify for the National Cross-Country Finals at Terre Haute, Indiana, a place Sean won’t forget in a hurry.Unfortunately very early in the race he suffered a major setback when breaking his third metatarsal and since that day in late November his foot has been in a special rehabilitation boot and gladly now he is looking forward to discarding the boot and getting slowly back to business.

All in all it has been a whirlwind first year for Sean who was awarded the ‘SEC Cross-Country Freshman of the Year,’ and who according to the ‘Ole Miss’ head coach  Brian O’Neal is proving to be a ‘great leader’ at the college.

Sean hopes to be back competing perhaps in April/May but unfortunately will miss out on the whole 2015 American Collegiate Indoor season.

Looking further ahead Sean has Rio in 2016 on his radar. He has made the decision to concentrate more on the 800m as against the 1500m for now and hopes he can get a qualifying time to get him on the plane to Brazil.

“The qualifying time will be about 1:45:7 and I am at 1:47 now but I am hoping I can get there, depending on the right race on a good day with serious runners I might jump on the train and make it,” he added.

Finally, before finishing Sean took time out to thank his parents Anthony and  Angie for all their support along the way. He too lavished praise on his former coach at Clonmel Athletic Club  Anthony Moynihan for mentoring him when big decisions had to be made. Sean also had kind words for Clonmel AC, of which he is still a member, for helping him greatly in his  early career development.

So back to ‘Ole Miss’ for another year and with Sean go all the best wishes for 2015 and to big achievements in athletics for many years to come.