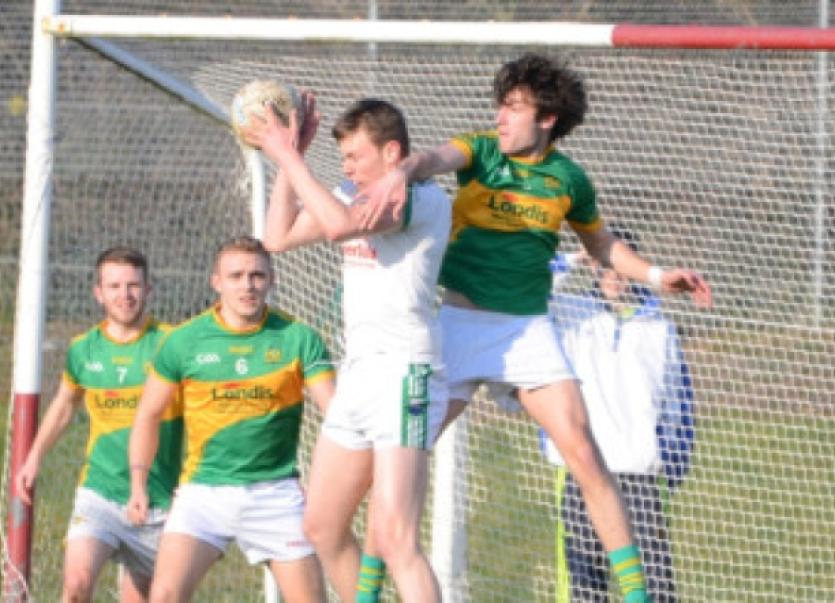 Commercials produced a second half tour de force to eventually overcome a gallant effort from a Cahir /Fr. Sheehy’s combination to qualify for this year’s South Tipperary under 21A football final.

Commercials produced a second half tour de force to eventually overcome a gallant effort from a Cahir /Fr. Sheehy’s combination to qualify for this year’s South Tipperary under 21A football final.

Although the winning margin was nine points it wasn’t until the final quarter Commercials pulled away and finally killed off the Cahir/Fr. Sheehy challenge.

Indeed Cahir/Fr. Sheehy’s started the brighter and Keelan Hickey had them off the mark with a pointed free after two minutes. But they were caught napping three minutes later, in Commercials first attack, when Shane Flynn deflected a long delivery from Padraic Looram to the net.

This setback didn’t unnerve the underdogs however as they continued to dominate the middle third and two points each from Ben Hyland and Keelan Hickey and one from Colin English had Cahir ahead 0-6 to 1-1 after 20 minutes, Commercials point coming from a wonderful solo effort from Padraic Looram. Commercials responded by crowding the midfield and began to seek out more possession. And the speed of their attacking play began to make inroads into the Cahir/Fr. Sheehy defence. Three unanswered points from Paudie White, Brian Walsh and Shane Flynn had them ahead 1-4 to 0-6 at the end of an entertaining first half.

Commercials started the second half as they finished the first, on the attack. A Michael Nugent point stretched the lead early on. Then Shane Flynn was put through on goal and he brought a fine save out of Cahir goalie Rares Stoica. But there was nothing he could a few minutes later when Michael Nugent slid the ball through a crowded goalmouth to the net to give Commercials a five point lead.

And when Paudie White sent over a free in the 38 minute they looked to be on their way. But Cahir/Fr. Sheehy’s responded well, and when substitute Conor Cashman drove the ball to the net and Liam Casey followed it up with a point it was back to a two point game at the end of the third quarter which could have gone either way.

But as the tempo increased so did the temperature and the tackles were becoming more robust.This led to a melee involving a few players from both sides, at the end of which referee Derek O’Mahony produced a red card for Commercials Sam Ryan.

This sending off seemed to galvanise Commercials and they went on to outplay Cahir all over the field. Some of their interplay at this point was stunning, especially that between Ross Dennehy and Paudie White that lead to their third goal.

Points from Padraic Looram (2), Shane Flynn, and Paudie White put the gloss on what was a dominant second half display and left Commercials deserving winners on a scoreline 3-10 to 1-7 to set up a final meeting with Moyle Rovers.

Commercials eventually won this game because of their greater footballing knowhow, their technical ability on the ball and the speed of their attacking play. Here they had excellent leaders in Kevin Fahey, Brian Walsh, Paudie White, Shane Flynn, Michael Nugent and Padraic Looram.

For Cahir/Fr Sheehy’s it was a disappointing result in the end but for a long time it seemed that the performances of Conor Casey, Ben Hyland, Niall McKenna Liam Casey and Colin English might just swing this game their way.