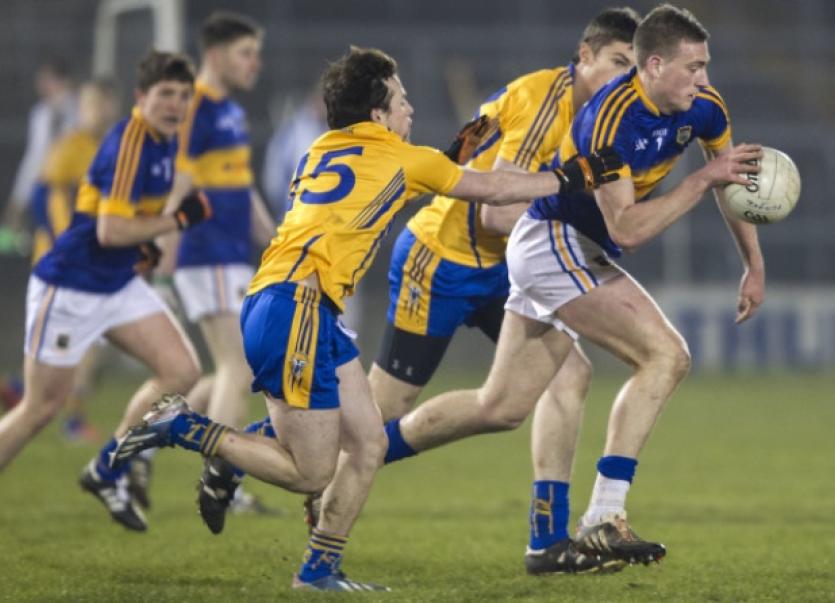 As expected Tipperary under 21 footballers have qualified for the Munster final by virtue of an eight points win over Clare at Semple Stadium on Wednesday last.

As expected Tipperary under 21 footballers have qualified for the Munster final by virtue of an eight points win over Clare at Semple Stadium on Wednesday last.

Expectations for the final, however, will be dampened somewhat following a performance in which Tipp at times lacked fluency, and in which, at different stages of the game, resembled a unit lacking somewhat in cohesion and direction.

But as manager Tommy Toomey pointed out afterwards “it was our full-forward line’s first time playing together - a number of lads haven’t been with us. It is the first time that the team has been on the field together. You have to take it in those circumstances.”

Tipp know they have a serious job of work ahead of them before they entertain Cork back at Semple Stadium on Thursday, 9th April. If Tipperary are to stop the Cork “Drive for Five” provincial crowns in a row, they will have to up their game greatly from the level of the semi-final win over Clare.

Having said that, it is the ideal way for the Colin O’Riordan-led team to approach the decider, as rank outsiders but with a home venue to help the cause. Cork will be seeking their 26th Munster title while Tipperary, appearing in their seventh final in nine years, will be looking for only their second win. Those stats alone demonstrate the sheer magnitude of the mountain Tipp have to overcome.

Against Clare, Tipp started well with two points inside 90 seconds from the twin towers of Colin O’Riordan and Steven O’Brien. And when Josh Keane pointed a free in the third minute, awarded after O’Brien powered through the middle like a colossus, it looked all too easy for the home side. Perhaps a little complacency set in to Tipp’s play thereafter.

By the 20th minute it was 0-5 to 0-1 with Liam Casey and Paul Maher scoring fine points to Clare’s only reply - a 12th minute free by ace freetaker Keelan Sexton - harshly awarded against Tipp full-back Jimmy Feehan.

At the interval Tipp were 0-7 to 0-4 up, the late first half points coming from Clonmel Commercials teammates Ian Fahey and Jason Lonergan, both well orchestrated and executed. All Clare’s first half scores came from frees against a very honest Tipp full-back line of Kevin Fahey, Feehan and Colm O’Shaughnessy.

The early stages of the second half saw Clare up the tempo and midfielder Jamie Malone had the visitors’ first point from play in the 34th minute. His two points in the game would be Clare’s only scores from play.

The home side slowly began to exert themselves on the game with the use of full-forward John McGrath around the middle helping matters. Man-of-the-match Jason Lonergan, who kicked five excellent points on the night made it 0-8 to 0-5 after 36 minutes. Further points from John  McGrath, Lonergan and Bill Maher stretched the lead out to 0-11 to 0-6 as Tipp centre-back Ross Mulcahy began to get involved more in attack.

The last 10 minutes saw Tipperary add four points without reply. Wing-forward Jason Lonergan coming in from the wing with pace was causing serious problems in the Clare defence. In quick succession he added two more excellent points. In the 52nd minute he weaved his way in from 45 metres to score, soon followed by another point after good work by Paul Maher.

The last two scores came from Steven O’Brien, a gem from all of 45 metres into Killinan, and a Liam Casey effort two minutes from time just before he was issued with a late-late black card.

At the end Gerry Cronin forced a super save from Killian Normoyle who also saved impressively from John McGrath in the first half, twice denying Tipp certain goals.