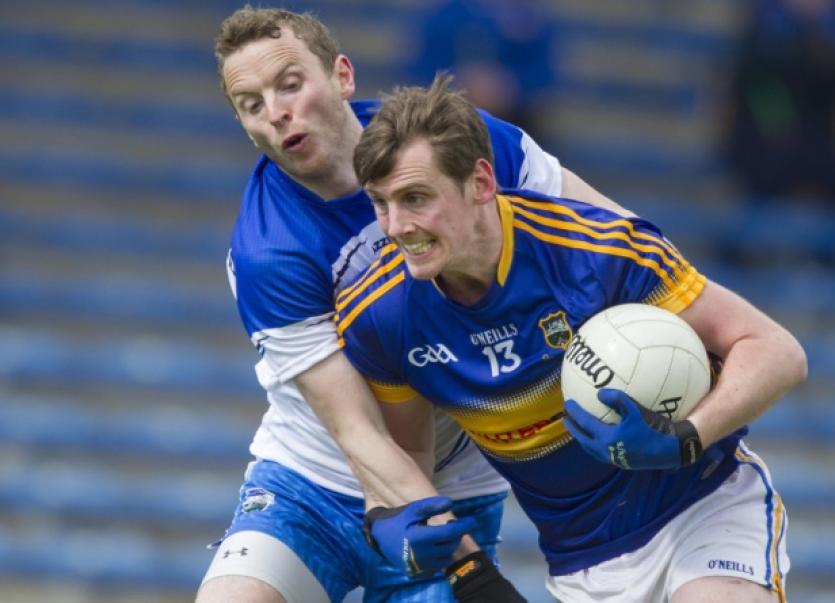 A hugely impressive display from Tipperary saw them easily overcome Waterford in the Munster Senior Football Championship at Semple  Stadium on Sunday last.

A hugely impressive display from Tipperary saw them easily overcome Waterford in the Munster Senior Football Championship at Semple  Stadium on Sunday last.

The usual expected intensity of Tipperary v Waterford league and championship clashes of recent years never materialised on this occasion. Right from the start it was evident that the Deise were in for a torrid afternoon and the game was well and truly over as a contest by half-time at which stage the hosts led by all of 13 points.

The recent progress of Tipperary football at senior and underage level compared to Waterford’s apparent stagnation tilted favouritism Tipp’s way but everyone expected that what Waterford lacked in form would be made up for in pride and passion on the day.

Not so. On Sunday last on the hallowed turf at Semple Stadium, Tom McGlinchey’s side were never at the races once Conor Sweeney popped over a free after 53 seconds. Waterford were beaten in every sector of the field having no answers for Tipp’s pace and polished movement throughout, not to mention the 1-21 total from play by 10 scorers. In sharp contrast Waterford only managed five points in 70 minutes of football with not one of the six forwards scoring from play on a day the Suirsiders will hurry to forget.

Tipperary’s prize for winning is a tilt at All-Ireland champions Kerry back in Thurles on Sunday week, 14th June. But ‘The Premier’ will have learned nothing from such a facile fixture as Sunday’s against Waterford. In preparation for the coming of ‘The Kingdom’ Tipp could have done with a more testing battle at real championship intensity. They got nothing of the sorts against Division 4 side Waterford. Peter Creedon will be more aware of that than anyone else.

Tipp had all the aces throughout, the trump card in the pack all day was midfielder Steven O’Brien who put in a magnificent display. It was a near perfect performance from the Ballina man, towering fielding, direct running at speed at the Waterford defence, acres of ground covered in work rate, capped by six wonderful points from play. Kerry manager Eamonn Fitzmaurice would have seen plenty to concern him as his side head this week to the Algarve for training camp in preparation for their trip to Tipp.

But there were many excellent performances right throughout the field for Tipp, not least O’Brien’s midfield partner George Hannigan who did a mountain of hard graft as well as kicking two second half points.

Tipp played in to a strong cold wind in the first half and were soul destroyingly 0-6 to 0-0 ahead by 12 minutes when Waterford registered their first score. Steven O’Brien kicked three points from distance in that period with Philip Austin and Ger Mulhaire also chipping in as Tipp wasted no time in going about their business.

Roaming corner back Robbie Kiely created two goal chances early on as Tipp threatened to destroy the Deise but neither were converted. Further points from Brian Fox and a pair from Michael Quinlivan stretched Tipp’s lead to 0-9 to 0-2 by the 20th minute with Ger Mulhaire and Brian Fox also having goal chances thwarted.

The desired goal eventually arrived unexpectedly. A close-in free by Conor Sweeney came back off the upright and Clonmel Commercial’s Michael Quinlivan reacted fastest to punch past Sean Barron in the Waterford goal. Tipp were now 11 points clear after only 24 minutes.

Another brace of points from Conor Sweeney (one a free) and a late late point from Philip Austin after good work by Alan Campbell sent Tipp in 1-13 to 0-3 at the interval. Waterford’s three first-half points coming from two excellent long range Michael O’Halloran points and a close in free from J. J. Hutchinson.

The second half was equally as lobsided as the first with Tipperary showing no let up in driving on for scores. Within 15 seconds Moyle Rovers’ Peter Acheson tapped over after O’Brien and Hannigan created the opening.

Inside the first five minutes Tipp were to add four points with O’Brien, Austin and championship debutant Seamus Kennedy also making his way up from wing-back to raise a white flag.

George Hannigan got a deserved point himself in the 10th minute which in a way summed up Tipp’s impressive attitude and business like workrate. Corner-forward Conor Sweeney made his way out to the 45 to dispossess Tommy Prendergast setting a move up which involved substitute Barry Grogan before Hannigan pointed. Tipp were hungry to keep the scoreboard ticking over. It must have been pleasing for Peter Creedon to see as much.

By the time Waterford had their first score 16 minutes in from centre-back Shane Briggs Tipperary had stretched the scoreboard to 1-18 to 0-3.

The final quarter of the game saw Tipp empty the bench with all six subs introduced anxious to stake a claim for a jersey against the All-Ireland champions. In this period they outscored Waterford 0-6 to 0-1. A class point from 40 metres by O’Brien were sandwiched by a pair of Brian Fox points, before Hannigan, O’Brien again, and another championship debutant Jason Lonergan put three Commercials boys on the scoreboard by the final whistle.

J.J. Hutchinson had Waterford’s last score all of 14 minutes from time.

For Tipp it’s a quick turnaround now with Kerry coming to Thurles on Sunday to begin the defence of Munster and All-Ireland crowns. Mindful that Tipp gave Cork a scare in last year’s semi-final, Kerry are unlikely to treat Tipperary with anything but the respect they now deserve. Tipp will find out exactly their football chart position against Kerry.