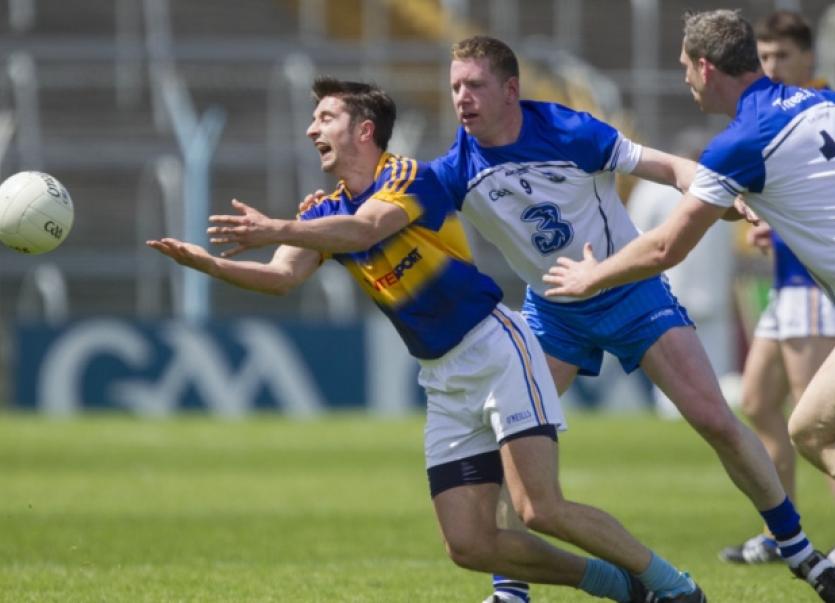 Fielding a team balanced with youth and experience, Tipp did just enough to overcome Waterford in the Munster Junior Football Championship at Semple Stadium on Sunday.

Fielding a team balanced with youth and experience, Tipp did just enough to overcome Waterford in the Munster Junior Football Championship at Semple Stadium on Sunday.

Hero of the hour was Cashel King Cormacs Gearoid Slattery who saved two penalties, one in each half, denying both Jason Curry and Gary Hurney either side of half-time.

Slattery, was one of eight under 21 panel members who featured on Sunday last as team manager Tommy Toomey continued the learning process for his young players. Mixed in with the experience of the likes of Aldo Matassa and Martin Dunne around midfield and the Leahy brothers from Arravale Rovers roaming everywhere, Tipp came good in the end after a slow start.

The visitors with the aid of a strong breeze into the town end certainly started the better and led 0-4 to 0-1 at the end of the first quarter, Tipp’s only score in this period coming in the seventh minute from a Dean Lonergan free which he earned himself.

A pair of points apiece from Jason Curry and David Power (one a free) saw Waterford make good use of the elements including driving rain on an unseasonally cold day at Semple Stadium. They were still ahead by three points after 20 minutes before Tipp midfielder and former county senior Aldo Matassa kicked two fine points in a minute to narrow the gap to one.

Seven minutes before half-time Gary Hurney buckled under nothing more than an awkward challenge from Luke Boland with the young Moyle Rovers star blackcarded for the offence. Then a minute before half-time Waterford were awarded a penalty kick but Gearoid Slattery dived left and low to deny Jason Curry. A real let-off for Tipp.

Pumped up by the King Cormacs man’s save Tipp rattled off three late points from Tommy Sweeney, Martin Dunne and Kevin Fox to lead 0-7 to 0-5 at the interval having played against the strong wind.

As they had in the opening half, Waterford enjoyed the better of the early exchanges on the resumption and David Power’s point four minutes in pulled Tipp’s lead back to a single point.

A second penalty came Waterford’s way in 38th minute when the lively Power was fouled inside the square. This time Waterford captain Gary Hurney took on the responsibility but again Gearoid Slattery guessed correctly going left to deny the Ballinacourty man. Slattery had saved Tipp’s blushes for a second time.

Waterford did get back level almost halfway through the second period with a David Power free but thereafter Tipp took control again.

A sweet point from a difficult angle by Kevin Fox restored Tipp’s advantage before the game’s vital score arrived.

A well-worked passing movement involving many Tipp players eventually saw Martin Dunne feeding Kevin Fox who excellently teed up Dean Lonergan to palm home a goal in the 46th minute. And when the Cahir man added another point a minute later, in a fine overall display, Tipp were suddenly 1-9 to 0-7 ahead and were not for catching thereafter.

They were still five points to the good after David Power (free) and Dean Lonergan once again exchanged points. However, with six minutes remaining Waterford got a goal which made for an exciting finale to the game.

An criss-cross passing movement involving Gary Hurney and David Power set up substitute Dylan Guiry and The Nire man blasted past Slattery to narow the gap to just two points.

Cool heads were called for at the stage and Tipp held theirs. After Niall McKenna was fouled Dean McEnroe kicked a fine free from 45 metres before Kevin Fox with another superb angled point way out wide edged Tipp four clear. Waterford huffed and puffed but they needed more than a late David Power free with time almost up to deny Tipp.

Tipp’s best on the day were Gearoid Slattery for his penalty saves and kick-outs, Kevin Fox and Dean Lonergan in attack, Martin Dunne around the middle while the Leahy twins on the wings and everywhere else, stood out.