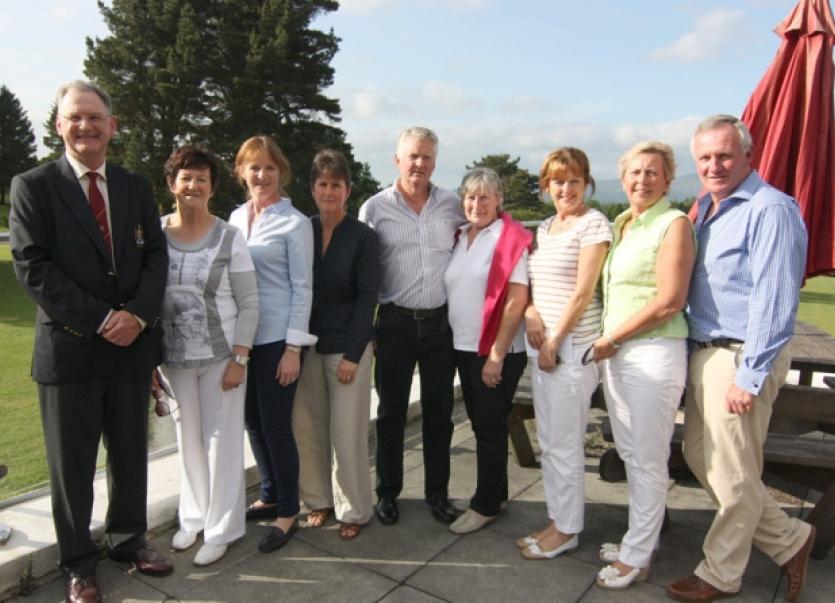 It is quite common in golf - maybe even normal - for the overnight leader to falter on the final day after having time to think about his leading score. But not so on this occasion when the week-long leader, Keith Norris, (13) held his nerve and produced a superb final 18 holes to become the runaway winner of the fantastic prize presented by the Captain, Mr. Jimmy Cass.

In a day that saw temperatures soar to nearly 30 degrees and where many golfers fell by the wayside (not all because of the high temperatures) Keith hit a superb 65 to add to his first round 60 to win by a remarkable five shots from Paddy Ryan (13).

As the scores came in for the final 18 holes - Mick Mullane,  the 2012 Captainâ€™s Prize winner, recorded a marvellous 64 and led the field for a brief moment on 132 with Peter Foran, also on 132, until Paddy Ryan finished, also with a great 64, to sit on top of the leaderboard but his position there was always in doubt especially when word filtered through that Keith Norris had covered the first nine in three over par giving him an almost unassailable lead. And indeed this was to be the case when he completed the course in a blistering 79 shots for a nett 66 and a total of 126 to win by five.

Keith might have worried a little when he started with a double bogey 6 but was coolness personified thereafter when he parred the second and birdied the short Par 3 third and even another double bogey on the 15th couldnâ€™t stop the inevitable winning score.

He was again coolness personified when he enthralled the large audience at the prize giving on Saturday night with an ad lib acceptance speech while at the same time giving high praise to the course management and mostly to the Captain for his wonderful array of prizes.

The evening ended with the ladies supplying the food and a very lively band keeping the feet tapping.

Sat & Sun, July 27th & 28th, Senior, Junior and Intermediate Scratch Cups. Players may enter more than one scratch cup but must play in the one appropriate to their handicaps first. Also note that players may not play the course on Saturday if they intend to play in a Scratch Cup on Sunday.

The wonderful prizes for these Scratch Cups are kindly sponsored by the Magnier, Wall and Patterson families.

There will be an open draw for the Presidentâ€™s (Mr. Sean Callaghan) Prize on August 24th. Draw sheet will be on display on Friday evening next at 5 pm

The next Club Seniors competition will be held on this Thursday 25th July 10.30am to 12.00 noon. All seniors are invited to come along.

No jackpot winner. There were four match 3 winners.

The intermediate team lost their semi final Sunday 21st July playing in Castletroy to Nenagh. Well done to all on a gallant performance.

We wish our mixed 4somes the very best of luck playing on the 3rd of August in Douglas, all support greatly appreciated.

The weekend festivities teed off on Friday evening with the â€˜three club / yellow ballâ€™ competition. A fine turnout of members with their â€˜favouriteâ€™ clubs took on the challenge of the 9 hole competition and with only one team returning the yellow ball it was TJ Riordan, Mick Kennedy and Tom Crosse who were victorious in that competition. The winner of the individual competition was TJ Riordan.

On Saturday Captain John was at the club to see the first competitors tee off at 7.30am which illustrates his dedication to the club. John was looking very smart in his club shirt as he greeted all the golfers throughout the day which included Members, Juniors, Ladies and Visitors which added up to nearly 120 in total and is a true testament to the popularity of John.

With the Mediterranean type conditions the course was in fantastic condition and credit for this must go to Mike Heffernan and his team for setting up some difficult pin positions on the day. The early starters had a slight advantage of the balmy conditions but with the breeze and temperature rising through the middle of the day the course was still a challenge for most players off the back sticks.

The top qualifying score of 65 nett was by Frankie Nolan, followed by 67 nett of James Keane, 68 nett by Mike Ryan and Kevin Oâ€™Hora, 69 nett by Kevin Cusak, Mick Kennedy and Alan Dunphy, 70nett by Joe Oâ€™Dwyer and Raymond Flynn. The final qualifying places of 71 nett went to Pat Irwin, Pat Ryan and Joe Lehart to leave a total of 12 players in the 9 hole play off.

The play-off was a tense and close affair with nerves getting the better of everyone at some time or another. The leaderboard changed on a number of occasions but on the 18th green it was basically down to a putting competition between Frankie and James for the title. When Frankie â€˜lipped outâ€™ for his par putt from 20ft and James two putted from a similar distance both players were level after 27 holes. After signing and reviewing both cards it was James who was declared the winner on countback.

A large crowd gathered up in the Ballyk bar at 10pm to witness a fabulous array of prizes while the buffet was supplied by the Ballykisteen Hotel. Club Secretary Richard Keays introduced proceedings by thanking everyone for supporting the Captains Day. Captain John took over and made a fine speech regarding the progress of the club to date and thanked all those that helped make his day a success.

The Presentation of prizes followed with the June Monthly Medal and then the prizes for the Captainâ€™s Day.

In his acceptance speech, James put his win down to his first ever â€˜eagleâ€™ when he chipped in on the sixth which helped him qualify for the play-off.

Congratulations also to our club president Tom Crosse on winning the Captainâ€™s Prize in Castletroy on Saturday.

Next Sunday we hold both the Junior and Intermediate Scratch Cups.

The captainâ€™s prize qualifier was played last weekend 20th and 21st July. There was a great turnout of players in honour of our Captain Michael Ryan. The leading qualifier was Eamon Doyle with a nett score of 71. Scores of nett 79 and even qualified for the final which will be played next Sunday 28th July at 12.30pm. There is a stableford competition next weekend for players who did not qualify for the final. Captains prize giving will be on Sunday night at 9.30pm. There will be a barbecue and music for â‚¬10 per head.

Sunday 28th July sees Lady Captainâ€™s Day, all names in no later than Thursday 25th. It promises to be a great day concluding with barbecue and music.