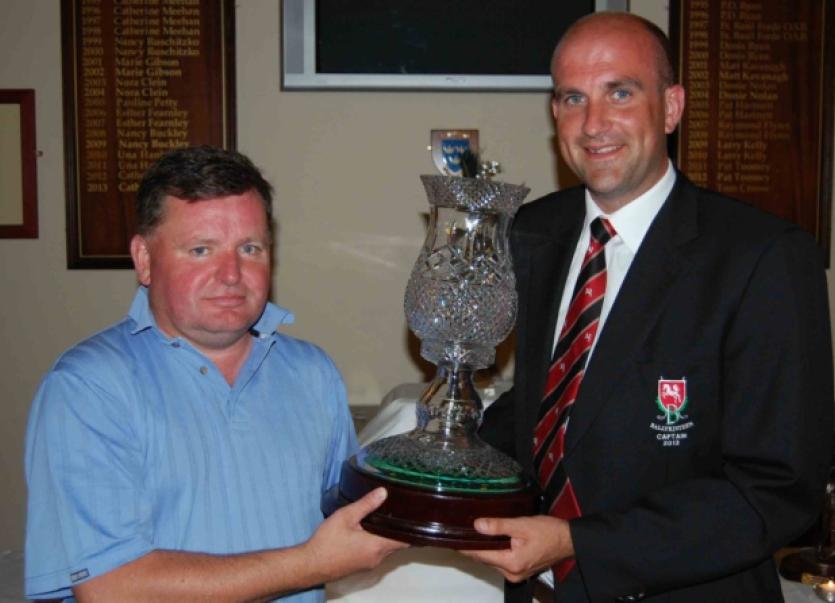 The Captainâ€™s Prize (John Oâ€™Connell) at Ballykisteen Golf Club was won on Saturday last by James Keane after an exciting knife-edge 9-hole play-off.

The Captainâ€™s Prize (John Oâ€™Connell) at Ballykisteen Golf Club was won on Saturday last by James Keane after an exciting knife-edge 9-hole play-off.

Twelve players made the qualifying grade with the top qualifying score of 65 nett recorded by Frankie Nolan.

The play-off was a tense and close affair with nerves getting the better of everyone at some time or another. The leaderboard changed on a number of occasions but on the 18th green it was basically down to a putting competition between Frankie and James for the title. When Frankie â€˜lipped outâ€™ for his par putt from 20ft and James two putted from a similar distance both players were level after 27 holes. After signing and reviewing both cards it was James who was declared the winner on a wcountback. (Report on Page 63 ).

Tipperary Captain, Tim, Walsh enjoyed with his beautiful prize going eventually to Eric Oâ€™Connor with a Phil Mickelson-like final round of 65. Indeed, 65 was a popular score with both Michael Murray and Ger Ryan also shooting same. Brian Shiels led the qualifiers with 66 whilst Jackie Nelligan also shot 66 but as a country member was ineligible to claim the main prize. (P61).