Local delight as â€˜Toystory Astonâ€™ through to Shelbourne Park derby 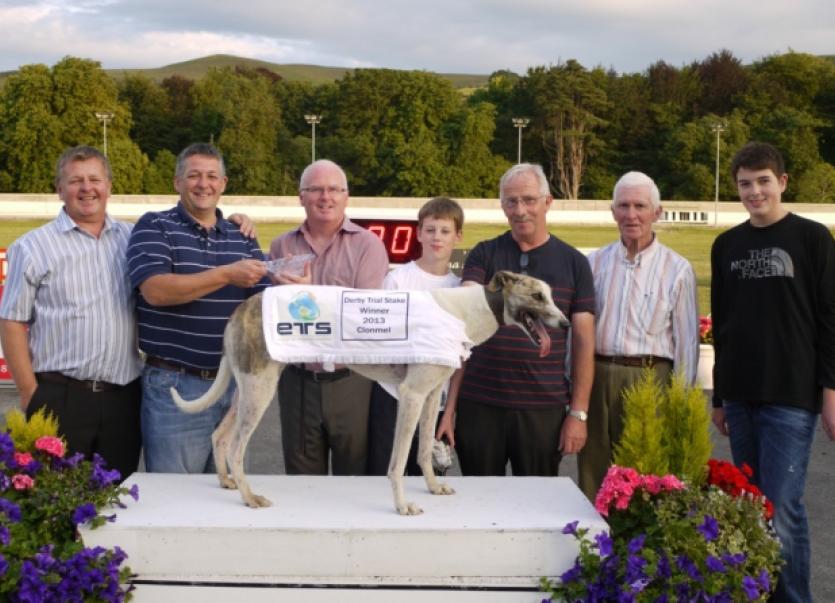 There was also a cracking trap to line win for the big local hope Toystory Aston (Shelbourne Aston-Toystory Lady) in the E.T.S. Irish Greyhound Derby Trial Stake and the eagerly awaited semi-finals of the Surehaul/Mercedes/B.I.F. Open Unraced Stake which saw trainer Darragh Morrissey and his owners Larry and Jack Oâ€™Shea win the first semi and take the runner-up spot in the second heat a feat which owner/trainer Tina Cooke uniquely repeated in reverse order.

The line up, therefore, for the final of the â‚¬3,000 to the winner event on Sunday evening next will see the Oâ€™Sheas and Darren Morrissey represented by Jacksabullet which won the opening semi-final in 28.80 and his litter brother Indigojack which finished second in the second semi whilst Tina Cooke will also be double handed with second semi-final winner Lughill Dano (29.34) and first semi-final runner-up Lughill Edward. The line-up for what looks set to be a terrific contest will be completed by the third placed duo the fancied Soviet Clooney owned and trained by Eamonn Cronin and Mountaylor Air running for Frances and Matthew Oâ€™Donnell.

Race 1 (A4) - Oakfield Grundy, a beaten favourite on his last run at the venue, was supported to recoup the losses and the son of Fatboyz Nodrog and Have You One did so in very impressive style. Owned and trained by Thomas Jordan in Thurles he broke very fast from trap six and made all the running to romp to an eight and a half length win over Amandas Boy in a very useful 29.05.

Race 2 (S1/S2) - Movealong Power went off the 5/4 market leader but never really got into it as trap six yielded another all the way success this time from Mustang Messi trained by Graham Holland for Sean Bourke. The son of Ballymad Under and Jodu Fame opened his account at the ninth attempt with a career best display that saw him come home seven and a half lengths clear of Daring Hawk with Clipper Carlton half a length back in third spot.

Race 3 (A3) - Turning Tables went to traps a 7/4 favourite to complete a quick Holland double and he did it with an impressive career best performance. A winner in Shelbourne Park on his debut the son of Tyrur Lee and Tyrur Alysa broke like the proverbial bullet and soon had several lengths in hand of his rivals headed by Longwood Jack. The latter kept on well but was still five lengths in arrears of the winner at the line with Popular Bubbles a further eight lengths back in third place.

Race 4 (A2) - Mahogany Boy was supported to evens to take this event for the Frances Oâ€™Donnell kennel but it was Coolard Chief which broke in front before being headed off the opening turn by the 5/2 chance Papa Smurf. Coolard Chief stumbled on the back straight and lost second spot to the favourite but Papa Smurf was now making the best of his way home and he stayed on well to defeat Mahogany Boy and Coolard Chief by two lengths and a length and a half in 29.18.

Graigues Kaino which made an eye-catching debut at Clonmel a week ago had his supporters at 2/1 and tracked the fast starting Stanleys Dream before taking control from that rival at the third bend. Graigues Kaino (Droopys Scolari-Graigues Toss) went on to defeat Stanleys Dream by two and a half lengths with Maddies Dream a length and a half away in third spot.

The cheers rang out and some tidy bets were landed as local hero Toystory Aston who is gathering an ever increasing band of followers gained his fifth and most important win in the space of seven weeks with a cracking display of pace and stamina that saw him defeat more established rivals to earn the honour of representing Clonmel track in the forthcoming Irish Derby. The son of Shelbourne Aston and Toystory Lady took quite a while to break his maiden but since he got the scent of victory he has improved rapidly and is a credit to his proud owner Rory Oâ€™Connor not forgetting Paddy Franey. Whatever awaits in Shelbourne Toystory Aston has given his connections and supporters a dream result and will prove a worthy Clonmel representative on our biggest stage.

Soviet Clooney was the 6/4 favourite in the first semi but was badly baulked at the opening bend as Jacksabullet lived up to his name and broke in front before leading Fiery Splendour and Lughill Edward on the back straight. The latter improved into second place at the third bend but could make no impression on the impressive leader which surged home to score by six lengths with Soviet Clooney finishing well from a long way back to take the third place ahead of Fiery Splendour.

Owner/trainer Tina Cooke with Lughill Edward through to the decider, held a strong hand with 5/4 favourite Lughill John and market rival Lughill Dano in the second semi and it was the latter which took the spoils by leading off the second bend and staying on strongly to defeat Indigojack, a litter brother of the first semi-final winner, by two and a half lengths with Mountaylor Air a length back in third ahead of the favourite which was in the wars round the early bends.

This concluding event completed a treble on the night for trainer Graham Holland whose even money favourite Billis Adare recovered from a slow start to lead off the final turn and score by a length and a half from Skywalker Apollo with Moreton Finale three lengths away in third place.

Another interesting Thursday card featured the final of the Tinaâ€™s Florist/Central Grill A4 Tri-Distance Stake for which Chicken Skin was an odds-on chance to take the tidy prize for trainer Graham Holland and the Oâ€™Dwyer family of Hawaii and Clonmel.

However, having unsuccessfully headed the market in his earlier runs in the competition, Chicken Skin had it all to do following a slow start here and could only take third spot behind the impressive 3/1 winner Coolgue Smokey.

Chaotic Rose made much of the running in a gallant attempt to score for the Hattemore family but Coologue Smokey took her measure at the final bend and raced away to take the spoils for his Mooncoin owner/trainer David Byrne.

Included on the card were the four first round heats of The Christian Flannery Foundation Fund A3 Stake and the fastest time was posted by the impressive winner of the second leg Monroe Rock owned and trained by James Frisby from Hugginstown.

Monroe Rock stopped the clock in 29 seconds flat and next best was the Owen McKenna hotpot Vanrooney which had surged clear to win the opening heat by six and a half lengths in 29.05.

Heats 1 to 3 of The Christian Flannery Foundation Fund A3. First Round.

Heat 1 - Owen McKennaâ€™s Vanrooney owned by Keith Doherty and Peter Oâ€™Toole was a warm order at 4/7 and the son of Ace Hi Rumble and Lady Deise overcame a slow start to lead on the back stretch and power clear of his rivals to record an impressive six and a half length win over Unusual Account in 29.05. Leci Larkin took the other qualifying place two lengths in arrears of the runner-up.

Heat 2 - This leg saw trainer McKenna represented with another hotpot Vito Wal but the Tralee winner was unable to deliver the goods, going under by two and a half lengths to the 3/1 shot Monroe Rock having had every chance.

The leading pair finished seven and a half lengths clear of the third home Dandy Diamond and the winning clock was the fastest of the four first round heats with Monroe Rock recording a career best 29 seconds flat.

Heat 3 - The 6/4 favourite Golden Jayjay owned jointly in Cashel by Garret Sheehan and Tom Doyle led on the run up but gave way to Dream Come True on the back straight. This 4/1 chance set out for home but was flying the distress signals as the favourite renewed his challenge together with Slip Maestro.

The stage was set for an exciting climax and Golden Jayjay got the verdict by the narrowest of margins over Skip Maestro with Dream Come True a lengh back in third place.