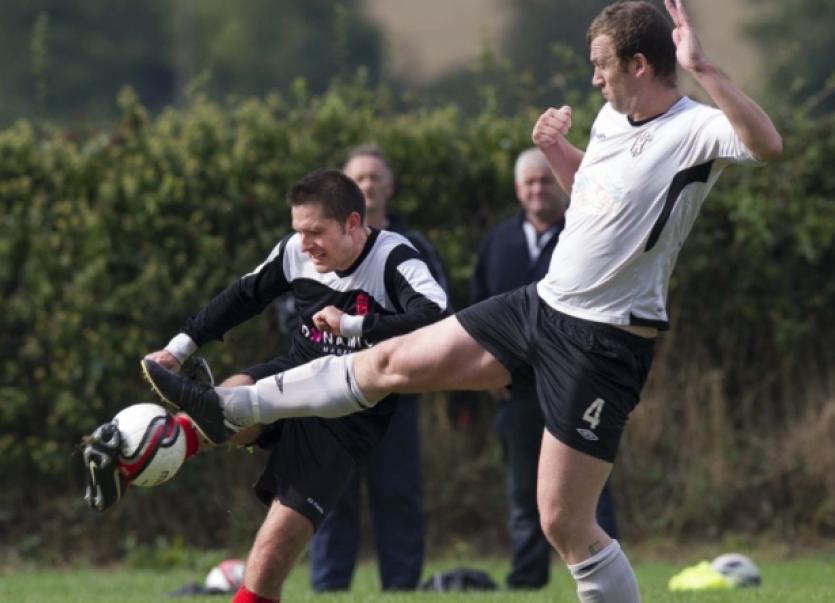 With a semi final place up for grabs, the away side were first off the mark with a 25 yard cracker scored by Darren Stokes on the quarter hour. The home side then took the initiative and equalised through another fine strike by Darragh Browne 15 minutes later. Rosegreen missed from the penalty spot before half-timeand the teams went to the break all square. Rosegreen did get the lead after 65 minutes when Sean McCormack hit a screamer. Two minutes from time David Finnan put Bansha level and thenat the death Banshaâ€™s Darragh Mc Grath scored the winner.

Wilderness Rovers were coming into the game on the back of three straight victories but were behind on the half hour when Philip Grace netted. However, things didnâ€™t go all to plan for the home side and they were reduced to ten men on the stroke of half-time when one of their players was sent to the line after getting two yellow cards. This should have been the cue for Widerness to take control in the second half but instead Borris doubled their lead on 55 minutes when Philip Grace struck again. From there to the finish is was a backs to the wall effort as the home side decided that they were going to hold what they had, and the best player of the game apart from the goalscorer turned out to be Borris keeper Joe Grace. This was a well earned and very important three points for Borris and will send Rovers back to the drawing board.

After rising almost without catching breath through the divisions since their arrival on the TSDL scene Tipperary Town are now realising how hard it can be to breach that final step to the top flight when the fell to their second defeat of the season against near neighbours and staunch rivals Cullen Lattin. The rural side took the lead from the penalty spot through Alan Hayes after twenty four minutes and Town were undone again from a set piece 15 minutes later when John Russell blasted a free kick to the net. Two goals to the good at half time, the away team settled into a pattern of controlled defence in the second half and gave the home side no real chances to get back into the game, instead taking a very valuable three points home with them.