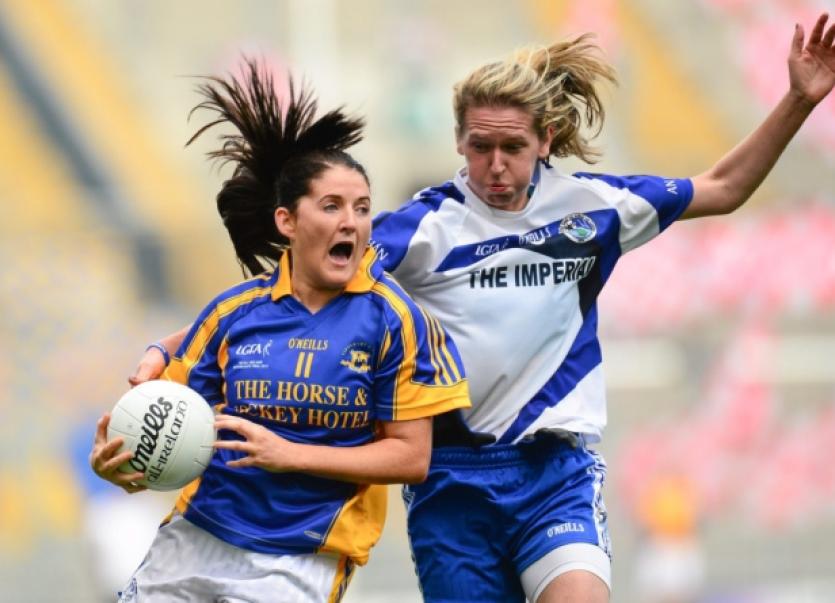 A magical sporting journey ended in tears for Tipperaryâ€™s ladies footballers when they endured a heartbreaking defeat at the hands of favourites Cavan in a pulsating All-Ireland Intermediate Final in Croke Park.

A magical sporting journey ended in tears for Tipperaryâ€™s ladies footballers when they endured a heartbreaking defeat at the hands of favourites Cavan in a pulsating All-Ireland Intermediate Final in Croke Park.

Losing a game that they dominated for long periods was a cruel blow to Tipperary, who were overpowered by a more physical Cavan whose late surge saw them over the line after an absorbing contest.

Cavan had been chasing Tipperary for most of the game and when they managed to edge in front by a point for only the second time with just under nine minutes left they built on that advantage. Cavan converted a penalty and Tipperary, a player down having had their goalie sent off in the concession of the penalty, had little time or the strength in reserve to salvage anything from the game.

For only the second time Cavan took the lead with just eight minutes and fifty seconds left on the clock when full forward Bronagh Sheridan pointed.

Tipp squandered two opportunities to score, a pass from Lorraine Oâ€™Shea never found its intended target, full forward Gillian Oâ€™Brien, and substitute Aisling McCarthy hit a wide as Tipp tried to get back on level terms but Cavan struck the killer blow with six minutes left on the clock.

Tipperary goalie Patricia Hickey charged out of her goal to take down Aisling Doonan, who was poised to score a goal. Referee Gus Chapman had no choice but to send off the Tipp goalie and she was replaced by Helen Kennedy, while one of Tippâ€™s most potent forwards Edel Hanley was sacrificed.

Full forward Bronagh Sheridan stepped up to slot the goal past the sub goalie and Cavan were well and truly in the driving seat with five minutes left. Tipperary, who throughout the entire campaign had defied the odds with incredible comebacks, most notably in the semi final against Fermanagh, bravely battled to try and force their way back into the game.

Cavan stood up well to the pressure and defended a free and a line ball to deny Tipp in the closing minutes to hold out for victory despite a Sheelagh Carew point.It was a harsh blow for a Tipp team that had taken the game to Cavan from the throw-in. They surged three points clear in as many minutes, with Gillian Oâ€™Brien and Edel Hanley capitalising on great diagonal balls delivered into space, both taking a point from play and Hanley adding a free after Oâ€™Brien was fouled.

It was a perfect start for Tipp who played neat, efficient football against the wind in that first half.

Cavan responded with 4 points in a row to put them one up with twelve minutes gone but Tipp responded again. Captain Anne Oâ€™Dwyer was involved in the build up which saw the impressive Mairead Morrissey evade a number of tackles on a jinking run at the Cavan defence and the Brian Borus player blasted to the net to restore Tippâ€™s lead.

Cavan pulled one back but again Hanley and Oâ€™Brien pointed before Catriona Walsh scored a wonderful score after the move of the game which saw Sheelagh Carwew, Anne Oâ€™Dwyer, Lorraine Oâ€™Shea and Gillian O Brien involved in an intricate build-up.

Cavan again however pegged Tipp back with four points without reply to level the game at 0-9 to 1.6 and with a minute to go Gillian Oâ€™Brien scored her third point of the half to give Tipp the lead at half time.Unfortunately that was to be Oâ€™Brienâ€™s last score of the game .The full forward, who tormented Cavan in the first half, cut a frustrated figure in the second half as Tipp found it difficult to get good ball into the full forward line.Tipp managed to score just five points in that second half,three of those came from play through Edel Hanley,Mairead Morrissey and Sheelagh Carew with both Carew and Hanley adding points from frees.That poor five point second half tally cost Tipp dearly as they found it hard to break down the Cavan defence despite playing with the wind.Tipperary will look back on a game during which they fashioned more goal chances than Cavan . On at least three occasions players opted to take points when a goal chance was on and the two frees hit wide by Tipp just before the half time hooter also proved costly.They were some exceptional displays by Tipperary players on the day. Jennifer Grant stood out in midfield and her intelligent use of the ball after dropping back to pick up possession from the half backs was a feature of Tippâ€™s strong first half performance. She formed an excellent partnership with the hard working Sheelagh Carew in midfield while up front the movement and guile of Edel Hanley and Gillian Oâ€™ Brien set up Tipp.

Claire Carroll, Samantha Lambert and Mairead Morrissey also played important roles on a day when they put in a fantastic team performance, only to be caught by a late charge from Cavan.